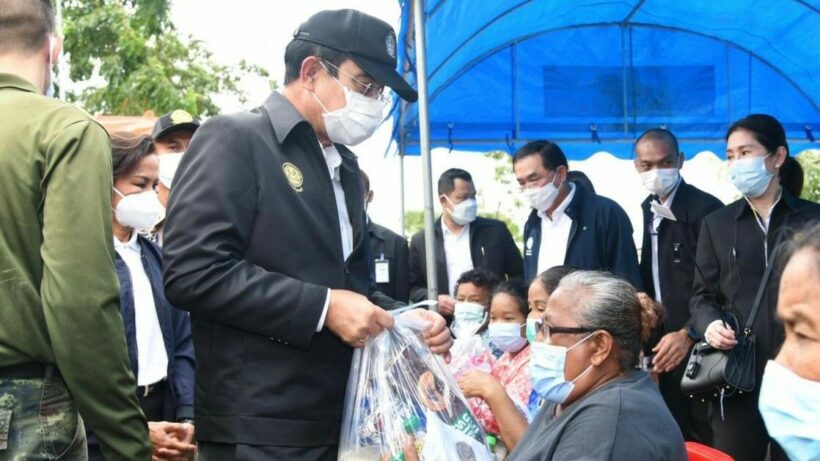 In light of recent heavy flooding that has swamped Thailand, including in Chaiyaphum where a hospital was forced to evacuate 40 patients, PM Prayut Chan-o-cha has conceded that the government is at a loss on how to solve the country’s annual flood problems. The PM did say compensation for flood victims will be on the way shortly.

Prayut’s comments come from a visit he paid yesterday to flood victims in the Sukhothai’s Si Samrong district, located in the north of Thailand. The district is one of the hardest-hit areas by the tropical storm Dianmu. A source says the PM and the Interior Minister Anupong Paojinda surveyed the devastation from the flooding and discussed what relief measures should take place for the victims. While visiting those affected by the situation, the PM distributed relief bags that contained essential items to flood victims at Ban Khlong Chad and at Wat Don Chan. He then moved on to inspect other relief operations.

“It is a holiday. But when people are in trouble, we can’t take a day off”, says the PM.

Prayut adds that the government needs a comprehensive plan for flood management for the entire country. He went on to say that they can’t 100% solve the problem, so specific areas need to be targeted and retention reservoirs need to be ready to handle all the water that will pour into it. He says that when floods happen, all the government can do is make sure the water recedes faster and compensation is paid out ASAP. He also says budget allocations must be in line with legal procedures and the projects must adhere to public hearings.

Several other provinces were battered by yesterday’s floods, including Tak and Nakhon Ratchasima. Roads were cut off and cars were seen almost completely submerged underwater.

Fester
56 minutes ago, Fester said: Average yearly rainfall in Thailand has actually been trending down in recent decades - this year, evidently, that trend will be broken. The recent tropical depression was not particularly big but it did dump a…

Rain
The flooding and seasonal cycles is not a recent phenomena - It just is. In the good old days - before the lovely and ingenious ideals of cementing everything over and systematically removing great networks of hklongs - high water…

Rain
16 hours ago, Soidog said: The Thais could ask the Dutch! They seem to know a thing or two about dykes dams and water management. Feel free to forward this to the Thai Government!    The Netherlands (or Holland as…

Soidog
2 hours ago, Rain said: Deluded. I know they are @Rain  but they can’t help it!