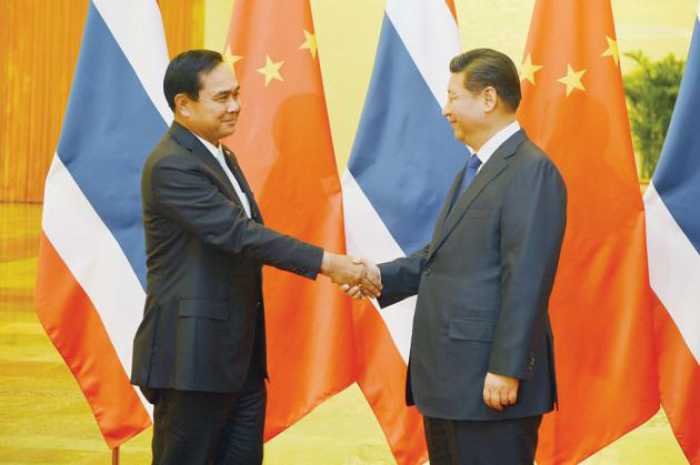 PHUKET: Thailand is more than ready to cooperate with China to develop the road-transport network that is part of the economic quadrangle linking Thailand, Myanmar, Laos and China, Prime Minister Prayut Chan-o-cha told China’s President Xi Jinping during a meeting in Beijing yesterday.

Prayut, who arrived in this Chinese capital yesterday to participate in the Asia-Pacific Economic Cooperation (Apec) Summit, met Xi and told him that Thailand appreciated China’s strategies in developing the R3A route – which when constructed could become one of the world’s prominent economic routes. China has been hailed for initiating the land and sea ‘Silk Roads’. The route would link China and Thailand through Laos.

Route R3A is part of the so-called North-South Economic Corridor that will link Thailand with Laos and China. The road route from China’s Kunming will cross the Mekong River at Huay Xai in Laos at the Friendship Bridge and enter Thailand at Chiang Khong in Chiang Rai province.

Government Spokesman Yongyuth Mayalarp quoted Prayut as referring to a proposed railway project, that Bangkok was ready to cooperate with China in developing the dual-track rail link that would connect Thailand, China and other countries.

Prayut also thanked Beijing for continuously importing Thai agricultural products particularly fruit, jasmine rice, and rubber, the spokesman said. Both leaders agreed to hold further talks in a bid to alleviate problems and obstacles in bilateral trade of agricultural products between the nations.

Beijing was told that Bangkok backed its policy to use of the yuan as a common currency of Asia, the spokesman said, adding China would support business transactions in yuan to decrease currency exchange risks and costs. “They also hope the agreement on the Chinese Yuan and the Thai Baht Bilateral Currency Swap Arrangement which will expire next month, could be extended.”

Referring to the education cooperation between the countries, the spokesman said Thailand and China agreed to expand cooperation on science, technology, research and innovation because China had advanced technology and a forum could be held so scientists from both countries could work and study together more closely.

Prayut also invited his Chinese counterpart to attend the Great Mekong Sub-region Summit to be held in Thailand on December 19-20, the spokesman said.

At the summit, Thailand is expected to push for the development of transport corridors to be considered economic corridors and border special economic zones. It is also expected to raise the human trafficking issue in the region. Prayut and other leaders kick off the Apec Summit today, during which they are expected to boost trade cooperation between member countries.

Meanwhile, US Trade Representative Michael Froman said yesterday that there would be no “major announcement” on a Washington-backed Asia-Pacific free-trade deal during a meeting of leaders from the region in Beijing this week.

Few expected that a deal on the ambitious 12-country Trans-Pacific Partnership (TPP) could be reached this year, largely because of a deadlock between the pact’s two biggest economies, the US and Japan, over how widely Japan will open its doors to farm exports. Business leaders, however, have been looking for indications of momentum on TPP talks at Apec’s minister meetings held on Friday and Saturday.

“There certainly will not be a final agreement, an agreement, a major announcement,” Froman told reporters during an Apec briefing when asked about the TPP talks.

“This is an opportunity when we have leaders altogether in one place for them to take stock of where they are and give political impetus to complete the rest of the negotiations.”