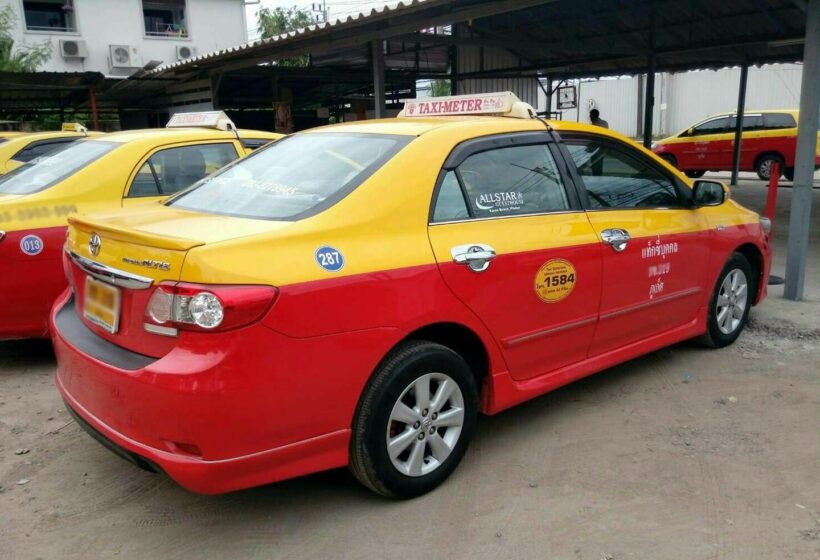 An Australian father has filed an official complaint to Phuket police saying a local taxi driver assaulted his 15 year old daughter at a parking area in a shopping centre in the middle of the island. The driver was released after an investigation and confessing to police that he just wanted to admire the passenger’s short pants.

Phuket taxis are in the spotlight again after complaints over expensive charges, and now this alleged sexual harassment incident.

On April 30, the 44 year old Australian father ‘Christopher’ reported to Police at Choeng Thale Police Station that a taxi driver ‘touched his daughter’s legs’ while parking at the Central Festival shopping centre in Phuket the day before. The father said he wanted to report this incident but was able to follow up any legal proceedings as the family had to fly back to their country on the same day.

Yesterday, tourist police invited the taxi driver in for questioning. According to the report, the driver claimed the teenage passenger asked him about her pants… “How are my red pants, beautiful?” The driver told police he touched her legs and told her the pants were great. He insisted that he didn’t have any “sexual thoughts” and had a close relationship with her parents because they had used his taxi service twice before. He said he had no idea why they had filed a serious complaint against him.

Thai media reported that the police questioned the driver and checked the CCTV inside the car before releasing him. Police say the case was assumed to be over as the whole family had already left Thailand since the end of April.

Some comments on Thai social media demanded that the police should give the driver a penalty because his actions ruined the reputation of Thailand and Phuket province. Some said that the incident wasn’t a good “welcome back” for the re-opening country.

PapayaBokBok
He just wanted to get to her Vegemite.. or thats the excuse I would have used..... So! Do do you come from a Land Down Under?

Soidog
11 hours ago, Shade_Wilder said: Thailand REALLY needs to deal with this kind of perversion in it's society. I totally agree. The problem is that there are no adults to call out these things unless they are foreigners. Most Thai…
Mazz11
My girlfriend is Thai and doesn't like going to the local 7/11 because the old men that hang out in the area constantly leer and give inappropriate comments. She always dresses conservatively to try to stop this but it seems…
HiuMak
Admiration should be at a distance.

President of a top university resigns after air hostess photos