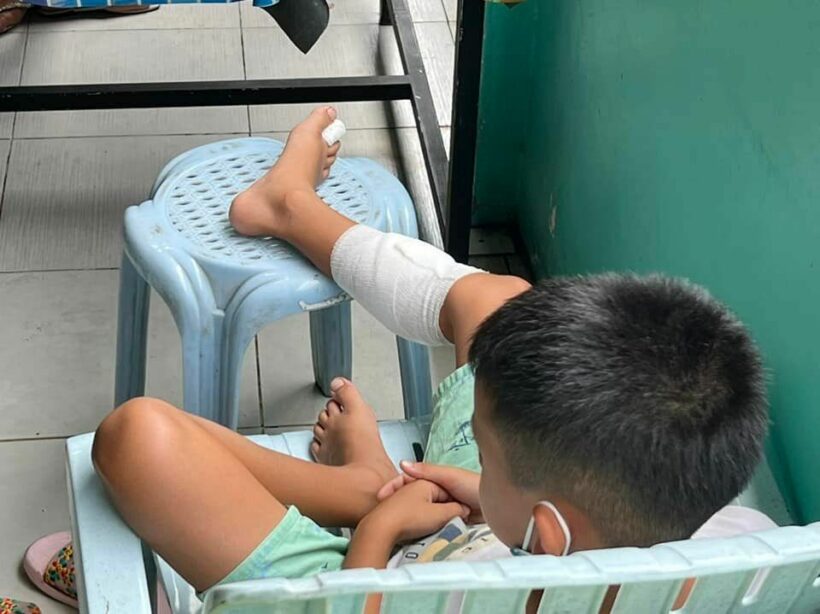 An 8 year old half Thai, half Ukrainian child was reported as being bitten by an unknown sea animal at Kamala Beach on Phuket’s west coast. The officer from the Department of Marine and Coastal Resources believes the animal could have been a shark.

On April 1, Thai media reported that the child travelled with 6 other family members. He went for a swim and was bitten on his leg in the evening at about 4.30 pm when the tide was falling. The boy was about 100 metres from the shore in water about 1 metre deep. He was swimming with both his mother and father at the time of the attack.

His family and local beach vendors helped recover him from the water and sent him to the Bangkok Hospital Phuket.

The boy’s wound needed 30+ stitches, after the attack left a long, deep cut in his right calf.

The locals and sellers who witnessed the accident believed that it could have been a seapike fish, a species of barracuda, that bit the child as one Chinese traveller was involved in a similar attack 2 years ago, an Australian on Karon Beach in 2015 and a Japanese man in 2017.

Local divers reported that they used to dive near the spot and had seen similar fish of around 13 kilograms there. According to the interview on Thai media, an American underwater photographer and shark specialist who lived in Phuket checked out photos of the wound and believe that a blue shark had attacked the child.

“Whilst the shark could search for food near the coast, Kamala Beach and other Phuket beaches were safe.”

The Director of the Department of Marine and Coastal Resources, Kongkiat Kittiwattanawong, expressed an opinion that the animal wasn’t a seapike fish “for sure” as the spot wasn’t their habitat at all. The officer confirmed that the wound came from a shark, but the type of shark was still unknown. He said it could be a blue shark or blacktip shark. He added that the case was an unlikely example and quite rare.

Yesterday, Phuket’s Deputy Governor, Pichate Panapong, visited the hospital and met the child and his family. The Deputy Governor explained to Thai media that the family lives in Thailand so that they weren’t able to claim the compensation or right as a tourist.

He added that the child’s mother, who is Thai ,understood the situation. The authority revealed that the experts would investigate more about the accident and use drones to monitor the spot. Also, a sign would be installed on the beach to warn tourists.

Larger sharks, and shark ‘attacks’, are extremely rare. In all recent cases the actual species of attacking fish hasn’t been identified.

Grumpish
A Blue Shark is highly unlikely (they are a deep water species and attacks are very rare), even a juvenile Bull or Tiger Shark (both often found in shallow water) would have done far more damage, and I don't think…
HiuMak
17 hours ago, palooka said: Definitely one of those nasty little 'Putin' shark, specially trained to attack Ukrainians. (Well they are training Dolphins to protect naval areas.) You (Ukranians) are not safe anywhere 🤣

Benroon
On 5/3/2022 at 6:35 AM, Prosaap said: But the most important they can not claim money because they live in thailand lovely people the thai live mean nothing but money all Give us that in English to give us a…

Benroon
On 5/3/2022 at 7:04 AM, Ramanathan.P said: If it is a shark attack, then the officials better take it serious. Once used to such attacks, sharks will come back for easy targets. It is good to have a better clarity…

Benroon
On 5/3/2022 at 9:37 AM, oldschooler said: Who should not have been swimming that far offshore ….or in the sea at all. My family ( including myself as former windsurfer & scuba diver) prohibited from ANY open water or boats…..…