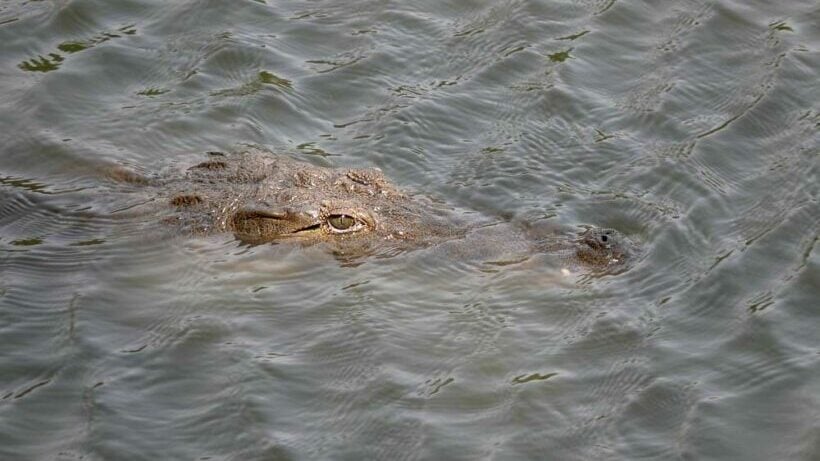 Phuket sandboxers have 1 more thing to keep track of as a crocodile may still be on the loose. Officials from the Sirinat National Park are still on the lookout for a crocodile in the region after a search yesterday did not uncover the scaly reptile. Officials speculate that the crocodile may actually be a water monitor lizard.

Park officials were assisted in their search by a team from the Phuket Fisheries Office. The crocodile was last reported seen in Koh Kata, on the northern tip of Layan Beach. The combined forces searched from 2:30pm until 4:30pm but did not report seeing any crocodiles, says Chief of the Phuket Fisheries Office, Watcharin Rattanachoo. The team consulted lifeguards and local fishermen, who also did not report seeing any crocodiles.

Watcharin adds that several monitor lizards were seen in the area being fed by local fishermen. He says that they now believe whoever spotted the “crocodile” may have been looking at a monitor lizard and mistook it for a crocodile.

“We have not been able to find any crocodiles like the one reported,” adds Watcharin.

The Chief concluded his remarks by saying that officials have coordinated with lifeguards and the head of the park protection unit to look out for any crocodiles in the area; which is a standard procedure to keep people safe.

Back in July, Si Racha residents were warned of the presence of baby crocodiles in a local lagoon. The month before that, crocodiles escaped from a farm in Trat.

gummy
They should mount  a search for that croc soon, and make it snappy 😂

Bluesofa
14 hours ago, Thaiger said: Phuket sandboxers have 1 more thing to keep track of as a crocodile may still be on the loose. Warning: Grammar Police complaint ahead. Since when do you write the digit '1' in the middle…

MrStretch
54 minutes ago, Bluesofa said: Warning: Grammar Police complaint ahead. Since when do you write the digit '1' in the middle of text as above? A "good" journalism outlet doesn't.  Most won't use the numeral with a number below 50,…