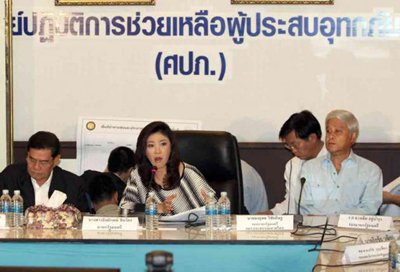 Mobile Meetings in all 77 Povinces
Phuket Gazette / The Nation

The Cabinet is expected to hold mobile meetings in all 77 provinces, including Phuket, in order to stay in touch with each locality, Deputy Prime Minister Yongyuth Wichaidit said yesterday, voicing confidence that political stability would enable the government to complete its four-year term.

“Prime Minister Yingluck Shinawatra plans to hold meetings and stay overnight at every province,” he said.

Yingluck is scheduled to chair her first mobile meeting in Chiang Mai next week. She said the idea of having the Cabinet convened in every province came up as Yingluck chaired yesterday’s meeting on policies pertaining to provincial clusters.

He said the prime minister instructed provincial governors to show tangible results on flood recovery efforts by March, a month after the disbursement of the funds.

The job performance evaluation for every governor will hinge on the post-flood recovery, he said.

He said he would hold talks with the Bangkok Metropolitan Administration in order to speed up compensation payments to residents hit by the flooding.

The government is determined to help flood victims across the country, including those living in the South, seen as the backyard of the opposition Democrats, he said.

Yongyuth said Justice Minister Pracha Promnok, in his capacity as director of the Flood Relief Operations Centre, would oversee the compensation payments.

He also said his Interior Ministry had a firm policy to punish any culprits involved in irregularities in connection with the flood relief supplies and at the same time to ensure fairness to officials wrongly accused.

PM’s son to participate in celebrations
Phuket Gazette / The Nation
While the country celebrates National Children’s Day tomorrow and Bangkok police are beefing up security at 19 celebration sites, Prime Minister Yingluck Shinawatra and her son will join in the occasion at the Government House.

Emphasizing culture and IT in accordance with the 2012 Children’s Day motto “Unity with Knowledge, Preserve Thai Identity, Mind the Technology”, the Government House event from 8am to 3pm, will provide free WiFi Internet connections,

At 9:55am, Yingluck and son Supasek Amornchat will watch a “Pearl Harbour” marching band performance at the Thai Khu Fa front yard next to Suan Lumpini School. The band won the Hong Kong Marching Band Contest 2011.

The PM and her son will invite youth representatives to sit on the prime minister’s chair and pose for pictures with them, before coming out of the Thai Khu Fa building to greet children and watch fun activities at various booths at the Santi Maitree Building.

The premier will also meet 200 representatives of the southernmost provinces’ young people and watch their five-minute performance, before getting together with the student council to hear their recommendations to the government.

Yingluck and her son will open a savings account at the Government’s Saving Bank to set a good example for other kids. Supasek will write a message on a crab-shaped card and put it on a board for the lucky draw for the Prime Minister’s scholarships.

Preeda suggested parents put their home and phone number information in their kids’ pockets and keep children’s photos in their phones for quicker and easier identification by police if families get separated.

Meanwhile an ABAC poll, conducted from January 4 – 11 on 1,205 Bangkok youth under 19, said the occupation of pilot/airhostess was ranked the most popular job by the youths at 30.8 per cent; followed by actor/singer at 29.1 per cent; doctor at 28.9 per cent; businessperson at 25.7 per cent; and the police at 24.4 per cent.

Only 0.2 per cent of the kids wanted to be politicians.

Most children (65.3 per cent) said their parents gave them enough family time, while 34.7 per cent said otherwise.