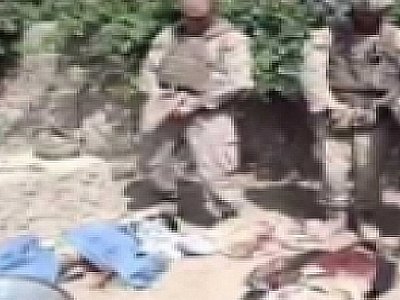 PHUKET: The United States government yesterday announced it has launched an investigation into a YouTube video (WARNING: Graphic content – Phuket Gazette Editors) which shows U.S. soldiers urinating on the bodies of Afghans.

The video was uploaded to the video-sharing website YouTube on Wednesday and appears to show four U.S. Marines, uniformed and equipped with combat gear, urinating on the bodies of three people, believed to be dead Taliban fighters.

About 20 seconds into the video, one of the Marines can be heard saying, “Have a great day, buddy,” apparently in a reference to one of the dead Taliban fighters. Another Marine then asks if a fifth person, filming the incident, got it on video. “Yup,” he responds as another Marine is heard saying: “Golden, like a shower.”

The NATO-led International Security Assistance Force (ISAF) strongly condemned the actions depicted in the video, stating that the “disrespectful act is inexplicable and not in keeping with the high moral standards we expect of coalition forces.”

The statement noted that the actions which appear in the video were conducted by a small group of Americans who are believed to be no longer serving in Afghanistan. “Nevertheless, this behavior dishonors the sacrifices and core values of every service member representing the fifty nations of the coalition,” the ISAF said.

ISAF said a U.S. Criminal Investigatory agency has launched an investigation into the video, but gave no other details. “[The investigation] will be thorough and any individuals with confirmed involvement will be held fully accountable,” the alliance said in a statement.

Meanwhile, the U.S. Marine Corps said its headquarters had been made aware of the video. “While we have not yet verified the origin or authenticity of this video, the actions portrayed are not consistent with our core values and are not indicative of the character of the Marines in our Corps. This matter will be fully investigated,” a statement said.

Afghan President Hamid Karzai also denounced the act, saying he was deeply disturbed by the video. He went on to describe the actions shown in the video as ‘inhuman and condemnable.’ He also called for an investigation into the incident and punishment for those found responsible for the actions.

“We expressly ask the U.S. government to urgently investigate the video and apply the most severe punishment to anyone found guilty in this crime,” Karzai said in a statement released by his office.

It was not immediately clear who appears in the video, who captured it and who posted it online, but it quickly received widespread attention and triggered protests in Kabul, the Afghan capital, as well as in Kandahar. The demonstrators accused the U.S. Marines of committing serious crimes.

The Taliban also criticized the video, describing it as ‘barbaric’ and questioning all of the other actions carried out during the past ten years that have not been captured on video and gone public through the media. “No religion that follows a holy text would accept such conduct,” it said in a statement.

The release of the video comes just days after an Afghan commission set up by Karzai claimed that American forces have ‘abused and tortured’ numerous prisoners at Afghanistan’s main prison, Bagram prison in Parwan Province. A U.S. embassy spokesman said it took the allegations seriously and said it investigates all allegations of detainee abuse.

PHUKET: The government of Myanmar (Burma) yesterday signed a cease-fire agreement with Karen rebels in Hpaan, the capital of the eastern Karen state, a Burmese news organization in exile reported.

Under the agreement, both sides will cease fighting, effectively ending the country’s longest-running civil war. However, in the past, the Karen National Union (KNU) has signed six cease-fire agreements with the government, all of which have been broken.

Both sides also agreed to have closer communication to prevent armed clashes and to work together in coordinating how government funds and programs will be established in the state. The KNU will also open liaison offices in designated cities.

The peace talks were led by Minister Aung Min, who has concluded several other cease-fires recently, and General Mutu Saipo of the KNU. Many delegates said there was a new atmosphere between the negotiators, but others said the cease-fire would depend on how future events unfold, according to Mizzima News.

The Karen civil war has been ongoing for more than six decades, forcing generations of Karen to flee to the jungle in fear of their lives. More than 100,000 Karen now live in refugee camps on the Thai-Burmese border, and tens of thousands have moved to third countries through the help of international resettlement programs.

Thursday’s cease-fire agreement may reduce some of the pressure on meeting the humanitarian needs of Karen refugees. International governments have been demanding unfettered access to the area before sanctions that have been imposed on Myanmar can be lifted.

Since the internal conflict began in 1948, an estimated 500,000 people have been killed.

PHUKET: A state prosecutor was killed in southern Germany on Wednesday when the defendant opened fire in the courtroom, police said.

The shooting happened at a courtroom in Dachau, a large town about 20 kilometers (12 miles) northwest of Munich. The defendant, 54-year-old Rudolf U., allegedly pulled out a gun and opened fire at the judge while the case was being heard.

Police said the shooter initially missed the 31-year-old judge, but then fired three other shots which hit him. The prosecutor, identified only as Tilman T., was rushed to a nearby hospital for emergency surgery but later died of his severe injuries.

According to German media, the defendant was an employer in the transport business and allegedly owed the state about 44,000 euros ($56,000) in unpaid social security contributions for his employees. The judge was to sentence him to a one-year suspended sentence when he pulled out his gun.

It was not immediately clear how the defendant obtained the weapon, which was a 6.35-caliber pistol. Officials said there are no security checkpoints at the courthouse to check for weapons, although the building does have a camera at the entrance and a security guard although he does not check all visitors.

In March 1994, 39-year-old Erwin Mikolajczyk opened fire at a court house in Euskirchen, a town in North Rhine-Westphalia near the border with Belgium and the Netherlands, after a judge upheld his conviction for assaulting his ex-girlfriend. Mikolajczyk shot and killed his ex-girlfriend, the judge and four other people before killing himself with a homemade bomb.