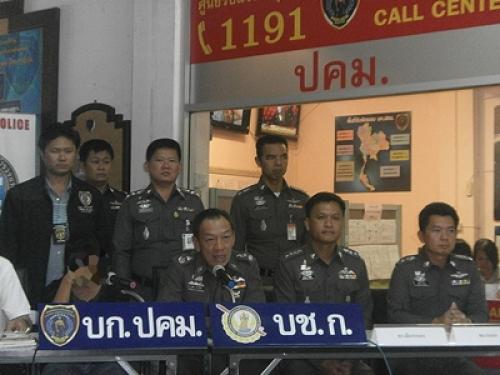 
Woman held for trafficking Myanmar girls
The Nation / Phuket Gazette
PHUKET: Police yesterday announced the arrest of a Thai woman suspected of human trafficking and the rescue of 13 Myanmar women – including a 16-year-old and three girls under 18 – allegedly lured into sex work at a guesthouse in Ranong, north of Phuket.

Chonthipaporn Palosilpa, 32, who was nabbed at DD Guesthouse in tambon Khao Niwet in Muang district, faces charges of procuring a girl under 15 and others under 18 for prostitution and molestation, as well as a charge of harbouring “aliens”. She denied the charges.

After a tip-off from the Freeland Foundation that Myanmar women under 18 were sex workers in Ranong, an investigation by Anti-Human Trafficking Division (AHTD) police found this was taking place in the guesthouse. So they organised a “sting” in which an undercover official agreed to buy sex from two women (including the 16-year-old girl) out of 13 Myanmar women presented to him, AHTD chief Pol Maj-General Chawalit Sawaengphuet said.

Upon payment, police presented themselves to arrest the suspect and rescued 13 Myanmar women and girls at the premises. Victim screening found that besides the 16-year-old, three other girls under 18 were reportedly assaulted and forced into prostitution, while nine other Myanmar women had illegally entered the Kingdom.

Ranong Governor Cherdsak Jampates said that police would try to catch others involved in these crimes. He noted that state officials were not involved in human trafficking – but if they were, they would be severely punished.

Last Wednesday, police arrested three Myanmar human-trafficking suspects who lured Myanmar girls into prostitution in Mae Sot in Tak province and rescued three girls under 18, following a tip that a gang lured girls aged 14-18 for sex work in the area.

Adul also set up a fact-finding committee to probe what happened and an allegation that the bar owner paid bribes to some police in five divisions for years – Bt21,000 in total – and occasionally sent girls to “welcome guests” at rogue police events so they would allow her to keep her business running.