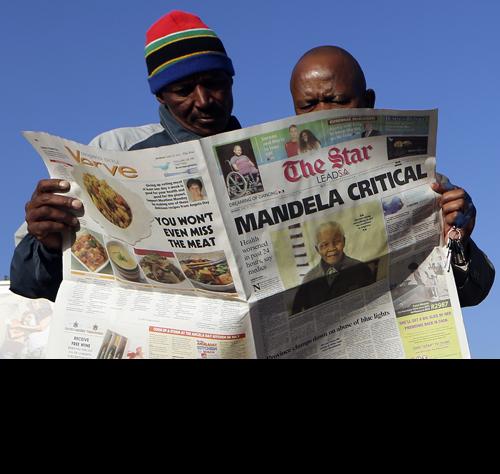 Madiba, as he is affectionately known, is revered among most of South Africa’s 53 million people as the architect of the peaceful 1994 transition to multi-racial democracy after three centuries of white domination.

However, with his latest hospitalisation – his fourth in six months – a realisation has set in that he will not be around for ever.

His deterioration this weekend, two weeks after being admitted in a serious but stable condition with a lung infection, has caused a perceptible switch in mood from prayers for recovery to preparations for a fond farewell.

“If it’s his time to go, he can go. I wish God can look after him,” said nurse Petunia Mafuyeka, as she headed to work in Johannesburg.

“We will miss him very much. He fought for us to give us freedom. We will remember him every day. When he goes I will cry.”

In a statement, President Jacob Zuma’s office urged South Africa and the world to pray for Mandela “during this difficult time”. But there was some concern among the public about doctors trying to prolong the life of one of the 20th century’s most influential figures.

“I’m worried that they’re keeping him alive. I feel they should let him go,” said Doris Lekalakala, a claims manager. “The man is old. Let nature take its course. He must just rest.”

Since stepping down in 1999 after one term as president, Mandela has stayed out of active politics in the continent’s biggest and most important economy and his passing is expected to have little political impact.

His last public appearance was waving to fans from the back of a golf cart before the final of the football World Cup in Johannesburg’s Soccer City stadium in July 2010.

During his retirement, he has divided his time between his home in the wealthy Johannesburg suburb of Houghton, and Qunu, the village in the impoverished Eastern Cape province where he was born.

The public’s last glimpse of him was a brief clip aired by state television in April during a visit to his home by Zuma and other senior officials of the ruling African National Congress.

At the time, the 101-year-old liberation movement, which led the fight against white-minority rule, assured the public Mandela was “in good shape”, although the footage showed a thin and frail old man sitting expressionless in an armchair.

As the 30-year-old leads the world’s lone superpower on a global game of hide and seek, U.S. government officials faced questions about whether they had botched the effort to extradite Snowden from Hong Kong to face charges related to his leak of classified information.

The latest wrinkle in the Snowden saga poses a different set of questions for an administration that has spent weeks fending off questions about whether it has abused its power to collect taxes, investigate criminal activity and fight terrorism.

Yesterday, administration officials said they had done all they could to bring Snowden to justice. Chinese defiance, rather than bureaucratic bungling, had allowed the 30-year-old former contractor to slip out of Hong Kong as officials there weighed Washington’s request for extradition, they said.

“This was a deliberate choice by the government to release a fugitive, despite a valid arrest warrant,” White House spokesman Jay Carney said at a briefing.

Carney said yesterday afternoon that it was the U.S. assumption that Snowden was still in Russia after fleeing Hong Kong for Moscow over the weekend.

Other administration officials tried to dispel any notion of foot-dragging since Snowden first went public on June 9, and dismissed suggestions that they could have taken other steps to detain Snowden, who had gained access to highly sensitive information as a contract systems administrator at a National Security Agency facility in Hawaii.

Snowden’s exact whereabouts were a mystery on Monday as Russia resisted White House pressure to stop him during his journey to escape U.S. prosecution.

Reporters staking out an Aeroflot flight to Havana from Moscow on Monday, saw no sign of Snowden. The captain told reporters on emerging from customs: “No Snowden, no.”

Ecuador said it was considering Snowden’s request for asylum, and advocates in the anti-secrecy group WikiLeaks were also asking Iceland to take him in.

Snowden’s decision to go on the lam creates another headache for the Obama administration, which has seen priorities like immigration reform threatened by a string of scandals.

Republicans in Congress say the Obama administration has abused its power by targeting conservative groups for heavy-handed tax scrutiny and seizing reporters’ phone records in the process of investigating security leaks.

When it comes to the NSA revelations, most lawmakers were already aware of the surveillance program and few have raised objections. Republicans by and large have focused their criticism on Snowden and China rather than the administration.

That may change if the ordeal drags on. Republican Representative Peter King of New York on Monday said Obama should have taken a harder line with the Chinese authorities who ultimately control the semi-autonomous region of Hong Kong.

“I hate to be in the middle of a crisis second guessing the president, but where is he? Where is the president? Why is he not speaking to the American people? Why is he not more forceful in dealing with foreign leaders?” King said on CNN television.

There are also likely to be increasingly embarrassing questions about how Snowden managed to download and take many highly sensitive documents when he was working in Hawaii for NSA contractor Booz Allen Hamilton. The head of the NSA, General Keith Alexander, said on Sunday that he did not know why the NSA did not catch Snowden before he left Hawaii for Hong Kong in May.


Berlusconi guilty on sex charges
Reuters / Phuket Gazette
PHUKET: A Milan court sentenced former Italian prime minister Silvio Berlusconi yesterday to seven years in jail and banned him from public office after finding him guilty of paying for sex with a minor and abusing his powers of office to cover up the affair.

Berlusconi was found guilty of paying for sex with former teenaged nightclub dancer Karima El Mahroug, better known under her stage name “Ruby the Heartstealer”, during the now notorious “bunga bunga” sex parties at his palatial home near Milan.

The panel of three judges, all women,