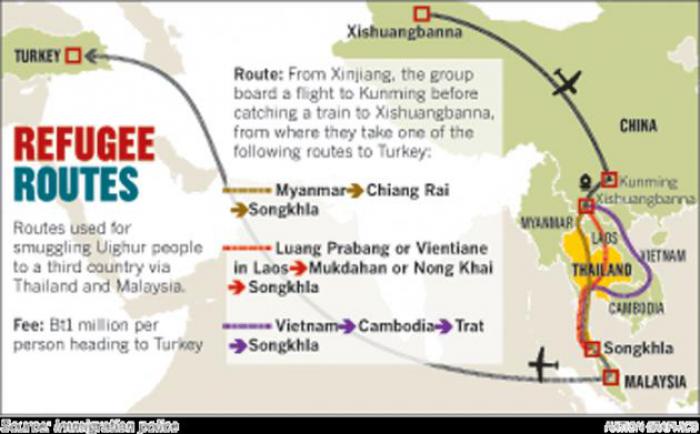 PHUKET: The United Nations and rights organisations are set to take care of a group of 220 people smuggled to Songkhla on Wednesday, who have been found to be Uighurs who fled Xinjiang, the mainly Muslim region in western China, Human Rights Watch adviser Sunai Phasuk said yesterday.

The group were on their way to Turkey through Malaysia, he said. Efforts were under way to try to verify reports that their passports were seized by smugglers based in Malaysia.

Police and Thai officials were initially unsure what the nationality of the group was. They were first thought to be Turks, or Kurds or Arabs.

The Chinese Embassy has coordinated with Immigration Police on obtaining information from the group, which consists of 78 men, 60 women and 82 children.

Sunai said he was concerned about the Uighurs’ welfare if or when they were repatriated to Xinjiang, given the insurgency by some of its residents against China’s rule.

Deputy Prime Minister Phongthep Thepkanjana spoke after meeting the group at an immigration office where they had been detained. He said the group was not cooperating, and had demanded to meet with officials from the Turkish Embassy.

Human Rights Watch Thailand has contacted the United Nations and its human-rights agency to discuss possible measures to help them out, Sunai said, adding that they would not be repatriated if protected by the UN as asylum seekers.

Immigration Police chief Pol Lt-General Panu Kerdlarppol said verification of the Uighurs’ destination and port of entry was under way, and that the 220 would be returned to where they came from.

He said the Uighurs, who possess a large amount of money in US dollars, had been resting in Songkhla awaiting forged passports to be made available to them by smugglers from various countries. The Uighurs were likely to have travelled to Thailand via car in smaller groups before they gathered in Songkhla. They were later found by Thai people and arrested.

An Immigration Police source said this group of Uighurs had been kept longer in Songkhla by smugglers who demanded another US$10,000 to $20,000 (Bt323,000-Bt646,000) from each of them, while smugglers usually only keep them briefly in Thailand. He said a group of smugglers dealing with Uighurs were a multinational criminal ring based in Malaysia. They charge around $40,000 for each Uighur wishing to travel to Turkey, a Muslim country.

Along the smuggling routes in Thailand, smugglers transport them in vans or pickup trucks to residences near a shopping mall in northern Bangkok and Pathum Thani, before heading to Songkhla in the far South.

Smugglers have links with local politicians based in areas connected to smuggling routes.

In Malaysia, The Star daily newspaper reported that a bid by 62 illegal immigrants from Turkey to enter Malaysia from Thailand had been foiled by the General Operations Force (GOF).

The 62 were detained while trying to cross through the Malaysia-Thailand border fence.

“GOF personnel, who became suspicious [of] human movement early in the morning, surrounded the illegal immigrants,” he said.

PHUKET: Elected governors with a larger budget for provincial administration was one of the key points brought up at People’s Democratic Reform Committee (PDRC) national reform forum yesterday.

Key speaker Prof Charas Suwanmala, a former dean of the Faculty of Political Science at Chulalongkorn University, said that 10 or 15 provinces were ready to shift to the elected governor system and that it could be implemented as soon as a new, non-elected government is put in place.

In his speech, Charas listed the aspects of the new system, which would include a provincial “people’s council” that would scrutinise the work of the elected governor and would have the authority to impeach the governor should problems arise. He said the central government would continue to handle foreign policy, national security, military and fiscal policy.

“With decentralisation, the concentration of power and the fight for it would cease. Having a centralised state and a representative democracy are failures. If the central government does not transfer power to local governments, both will go bankrupt in the future,” he said.

Charas added that provinces that felt ready to adopt the system of an elected governor should endorse the system through a referendum first.

Pongpayom Wasa-puti, a former Interior Ministry permanent secretary who chaired the forum yesterday, said this was a perfect opportunity to decentralise power in Thailand.

“This is a golden opportunity, the best chance and it won’t come again,” he said, referring to the possibility of a non-elected government being put in place to run the country for 12 to 18 months as demanded by the PDRC, which hopes to oust the Yingluck Shinawatra administration soon.

Pongpayom added that decentralisation would allow provinces to enjoy greater opportunities, efficiency and a larger budget.

One speaker pointed out that people in provinces such as Pathum Thani and Chon Buri paid higher taxes than the amount allocated to them under the national budget, while a participant said that pushing for decentralisation through a military coup might be the best way forward.

At the beginning of yesterday’s forum, PDRC secretary-general Suthep Thaugsuban clarified that decentralisation did not mean secession. “Don’t interpret it into something else,” he warned.

Yesterday’s forum was the third of the six planned to discuss six key issues.

PDRC spokesperson Akanat Promphan said people across the nation “must participate” in the reform process. Though no more than 300 people were present at the forum held in the Lumpini Park’s Youth Centre, the PDRC is also eliciting views online and says it will later hold consultations with people across the Kingdom.

PHUKET: The Centre for Maintaining Peace and Order (CMPO) will propose that the state of emergency in the capital and nearby areas be lifted next week, National Security Council secretary-general Paradorn Pattanathabutr said yesterday.

It would be up to Cabinet to lift the decree and replace it with the Internal Security Act (ISA) implemented to maintain peace and order in the areas where the state of emergency ended, said Paradorn, who is also secretary of the CMPO.