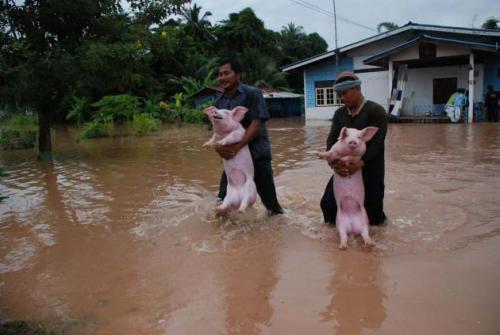 PHUKET: With Typhoon Wutip rapidly heading for a downgrade to a low-pressure ridge yesterday, some Thais heaved a sigh of relief but many remained on the lookout for another coming storm.

“The severity of Wutip is less than initially expected,” he said.

But he added that Wutip would still cause heavy rain in some provinces.

Floodwaters in Chaiyaphum have reached between 50 and 70 centimetres since the arrival of Wutip.

“We are now facing the worst floods in half a century,” Poj Piromkij said on behalf of more than 200 families in Tambon Talad Laeng in Chaiyaphum’s Ban Khwao district.

All three main roads to the local villages had been under floodwater several metres deep for two weeks, he said.

He said the torrents of floodwater were so strong that boats without engines could hardly move.

According to the Disaster Prevention and Mitigation Department, floods have now ravaged 25 provinces.

Flood-related deaths during the past few weeks have reached 23 and more than 2 million rai of farmland have been flooded.

One of the hardest-hit provinces is Prachin Buri, which was visited by Prime Minister Yingluck Shinawatra on Sunday.

Plodprasop said flooding in Prachin Buri should ease within one week, if no more rain arrived.

However, he said a monsoon trough was now hovering over the Andaman Sea, the South and the Gulf of Thailand, bringing more rain.

“If the wind is strong, it may affect Chanthaburi and Prachin Buri,” Plodprasop said.

He remained confident that floods would not hit Bangkok, however.

“We have worked closely with the Bangkok Metropolitan Adminis-tration and we have already implemented efficient flood-prevention steps,” Plodprasop said.

He too assured residents of the capital that the situation was not worrying.

“We are ready to deal with the situation, including downpours that will likely fall on the capital [today and tomorrow],” he said.

Deputy Government spokeswoman Sunisa Lertpakawat said the Cabinet had given the WFMC the green light to prepare a draft law to establish a Water Ministry if it believed it was needed to achieve efficient long-term water management.

The approval was granted after Plodprasop told the Cabinet that the Water Ministry would ensure integrated and efficient water management and respond well to the government’s Bt350-billion water-management modules.

The government approved a Bt350-billion budget to overhaul the country’s water-management systems in the wake of the 2011 flood crisis, which claimed hundreds of lives and caused massive economic damage.