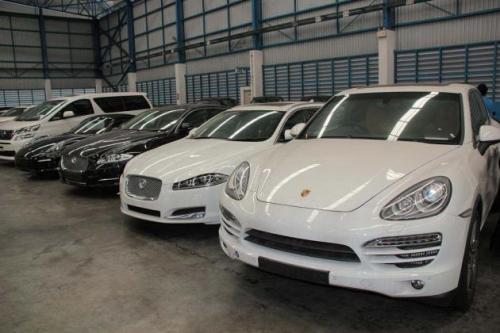 
DSI tells luxury car owners to keep valid documents ready
The Nation / Phuket Gazette
PHUKET: People who own or possess 488 luxury cars, whose domestic prices start at Bt4 million each – mostly senior police and military officers, businesspeople and politicians – are required to produce relevant documents and get their vehicles ready for inspection, as their names are on a list released yesterday by the Department of Special Investigation.

Most of the expensive high-performance cars are, surprisingly, equipped with alternative fuel systems such as liquefied petroleum gas or natural gas for vehicles – a bureaucratic loophole exploited by importers to avoid mandatory exhaust-fume inspections. This would have cost the owners or possessors more than Bt120,000 for each vehicle, so that those vehicles could be resold to buyers with minimal risk of being detected later by police or the registrars of vehicles.

“Owners volunteering to have their cars checked can explain their intent to the DSI now, but those hesitant will be summoned by DSI agents to get their cars inspected, starting from June 24,” he added. Some 100 suspiciously registered vehicles in DSI custody, apprehended after a series of raids nationwide, will undergo inspections soon, he said.

Tax-evading luxury cars probably cost the country more than Bt20 billion in lost revenue, according to the DSI.

DSI chief Tharit made the estimate based on the assumption that more than 8,000 luxury vehicles in the country had been or were about to be registered illegally.

Major Sukchart Sasomsap reported himself to the DSI, after a licence plate number that he once owned was linked to an alleged tax-evading vehicle.

Many luxury cars were smuggled into the country, but were later registered under claims they were imported as auto parts and re-assembled later.

Tharit said Thailand has no facility to reassemble super cars. Therefore, super cars that have been registered as reassembled in Thailand must have used false documents.

The owner of the house on 2 rai (3,200 square metres), Montri Boonphrom-on, 41, claimed the animals were legally imported, mostly from South Africa.

After the investigation into an alleged unauthorised wildlife-trading house, Metropolitan Police Bureau 3 joined with Natural Resources and Environment Ministry officials to search the house in Soi Hathairat 39.

They apprehended caretakers Rungroj Wattanapongsawat, 34, and Usanee Saejiam, 27, and some Myanmar workers and seized the 200-300 animals and birds and some stuffed animals.

Montri later produced import and purchase papers to explain to officials that the animals – most of which he allegedly imported for breeding and selling – underwent legal procedures. He said he had a permit from CITES (the Convention on International Trade in Endangered Species of Wild Fauna and Flora) to import them and there were actually 22 lions.

He claimed that six lions were his and the rest were Mitraparp Zoo’s. The zoo, which took two lions away, asked him to take care of the 14 remaining lions. He said a lion cost Bt200,000 to buy and import.

Police will check Montri’s claim of having the proper import papers for other animals, but they all would be seized first pending the probe. Ek also revealed that Montri had been arrested for wildlife trading four years ago and received a one-year suspended jail term.

Officials initially charged Montri and Runroj with having wild animals in their possession without permission, and conspiring to hide and trade wild animals as well as stuffed carcasses.

Some animals were sent to Ratchaburi’s wildlife nursing facility and the rest to Chon Buri’s Bang Phra Animal Centre.


Tax breaks eyed for Deep South strife victims
The Nation / Phuket Gazette
PHUKET: Companies and people affected by the country’s political violence and the unrest in the deep South would be eligible for tax exemptions under a draft law approved by the Cabinet yesterday.

Government spokesman Teerat Ratanasevi said the Finance Ministry proposed the draft law to cushion the adverse impact of the conflicts on the victims.

“Those who have received remedial actions from the government will be eligible,” Teerat said.

He said the draft decree would be forwarded to the Council of State for further review.

If the decree sails through, it will take effect retroactively from January 1 last year.

The man, Santiparp Pengduang, was found in the southern province of Phatthalung. The police chief declined to say whether Santiparp was involved with the disappearance of Ekkayuth, or whether Ekkayuth was safe, saying it is under investigation.

The police in questioning the driver are looking at two possible motives: personal and business conflicts, Adul said.