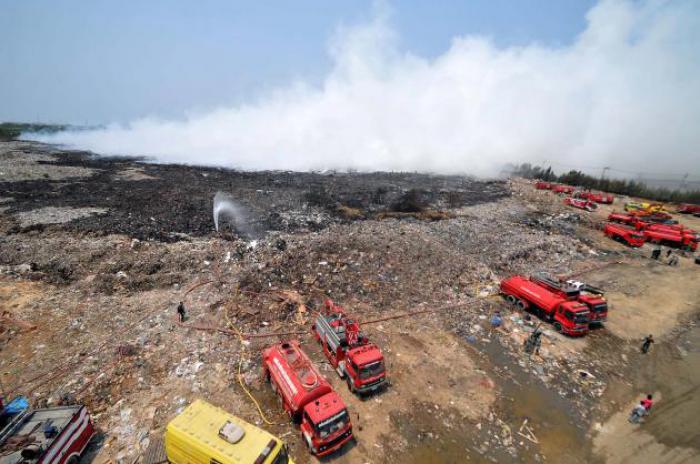 PHUKET: The Cabinet yesterday lifted the emergency decree in Bangkok and nearby areas and replaced it with the Internal Security Act, effective today.

Caretaker Prime Minister Yingluck Shinawatra said later that the move was aimed at boosting confidence in the business sector and reducing adverse impact on tourism.

Meanwhile, caretaker Deputy PM and Foreign Minister Surapong Tovichakchaikul said the Centre for Maintaining Peace and Order would stay in place and put in charge of the ISA, but would not have the National Security Council in the structure after NSC secretary-general Thawil Pliansri is reinstated next month. A court ordered the government to reinstate Thawil at NSC recently.

Surapong said the government picked Department of Special Investigation (DSI) chief Tarit Pengdith to replace former NSC chief Lt-General Paradorn Pattanatabut as secretary to the CMPO. Yingluck said the Cabinet had instructed the CMPO to bring about swift prosecution of wrongdoers and ensure that truth prevails.

Separately, a dud MK2 grenade was found outside Tonson Tower on Ploenchit Road some 100 metres from a military checkpoint early yesterday, police said. Ploenchit Road is part of the Bangkok business district.

Police said the tower is a fair way away from the People’s Democratic Reform Committee’s rally site at Lumpini Park and that the grenade had been lobbed from the nearby Ploenchit area but failed to explode.

Officials will check CCTV footage captured in roadside cameras and those at Tonson Tower.

PHUKET: The door for negotiations to resolve the political crisis was slammed shut yesterday after caretaker Prime Minister Yingluck Shinawatra announced that her government would not nominate 10 individuals to mediate talks with the People’s Democratic Reform Committee (PDRC).

Six independent organisations called on both sides to name 10 people who could help facilitate talks and move toward ending the political impasse.

Yingluck said she would not nominate mediators because PDRC secretary-general Suthep Thaugsuban had turned down the proposal as well. “So, the government believes it will be useless [to nominate],” she said.

However, the PM backed the idea of mediators holding talks, provided they lead a way out.

Asked about the PDRC’s continued push for reforms before an election and the government’s insistence on holding a poll first, Yingluck replied that holding elections first was not a condition.

Meanwhile, Election Commis-sioner Somchai Srisuthiyakorn said he would give up trying to end the conflict if the caretaker government and the PDRC reject the proposal by the six agencies.

Somchai made this remark while issuing a letter addressed to both sides in relation to the six organisations’ offer to set up a non-partisan committee to collect proposals from the conflicting sides and make adjustments until a conclusion can be achieved.

He said the government and the PDRC had until March 24 to consider the proposal, adding that their replies to this letter as well as their answer to the proposal to nominate 10 mediators would be opened publicly at the same time.

He went on to say that if both parties were found to reject the idea, then the six organisations would give up, and say they had done their best. But he reiterated that holding a dialogue was still the best way out.

On Monday night, Suthep told PDRC supporters at Lumpini Park that he would not propose any names.

“It’s not that I don’t want to cooperate [with the agencies], but I don’t think I can find neutral mediators because Yingluck and her brother Thaksin will continue clinging to power,” he said. “They will use all means available to them to fight and will only seek talks when they have lost. We can’t accept their proposal to return Thaksin’s Bt40 billion that was seized by the court and hold an election before national reforms are put in place.”

The aircraft could then have headed for the Straits of Malacca, ACM Prajin said, adding that this information confirmed what Malaysian PM Najib Razak had told the press in relation to the mysterious disappearance of Malaysia Airlines’ flight MH370.

However, he said, it was yet to be confirmed if the aircraft detected by the Surat Thani radar station was actually the missing flight.

Malaysia continues seeking help from governments across Asia in the search for the Boeing 777, which has been missing since March 9 with 239 people on board.

Najib said the plane was deliberately diverted from its flight path and new data showed communication between the missing plane and satellites almost seven hours after it turned back and crossed the Malay peninsula.

Prajin said he would hand the information to the Malaysian Air Force.

Meanwhile, Foreign Minister Surapong Tovichakchaikul said he and his Malaysian counterpart would soon discuss cooperation in the search for the missing aircraft.

PHUKET: Toxic smog from a landfill in Samut Prakan is threatening the health of both local residents and people working nearby – and officials believe the fire could burn for another five days.

Caretaker Industry Minister Prasert Boonchaisuk has threatened to file charges against the operator of the landfill. He said details from the provincial industry office showed the 150-rai dump was operated by Kromphol Samutsakhon, under a licence that expired in 2011. “The operator is liable to charges related to the Factory Act BE2535,” Prasert said. He added that if the operator was found guilty, punishment included both a jail term and a fine.

The Public Health Ministry has declared 500 metres on all sides of the site as a “red zone”. The amount of sulphur dioxide was more than 5 parts-per-million (ppm), well over the designated standard of 0.2 ppm. All residents in the zone are being asked to evacuate.