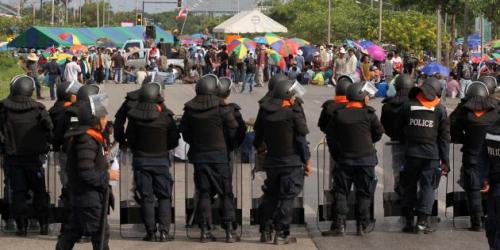 
Rubber protest impacting South tourism revenue
The Nation / Phuket Gazette
PHUKET: The rubber farmers’ protest in Surat Thani is causing a loss of at least Bt10 million a day to the domestic tourism industry in the South.

“Sales of salted eggs as a flagship product of Chaiya in Surat Thani are an example. The business is being hit because of a drop in tourist numbers,” Yutthachai Soonthronrattanavate, president of the Association of Domestic Travel, said yesterday.

Related businesses like restaurants, souvenir shops, local bus operators and vendors are also feeling the pinch. As a whole, the rally is making a psychological impact on the industry. The scene is tending to decimate tourist sentiment, he said.

Tourist destinations south of Surat Thani or islands such as Krabi and Phuket are also impacted because the flow of visitors to the area is obstructed due to blockades facing land transport.

The evidence is clear that foreign tourists in Khao San in Bangkok are having a hard time. It is becoming inconvenient to travel to the South by bus. The bus they board gets delayed.

The government needs to find a solution very quickly or else the tourism industry will take a bigger hit. It is a key industry with liquidity to fuel the national economy.

He said he understood the hardship of rubber growers under current market conditions. Although their movement is giving the tourism industry a big headache, he could accept and share their suffering. However, they should stage their demonstrations in limited areas, not spread out to other locations, especially the airport, as that is the heart of tourism.

If the airport is closed or becomes enwrapped in the chaos, the whole tourism industry may be ruined. Then the country would need a long time to restore its image, he warned.

Clearly, what the government should do right now is to try to create a good atmosphere. Tourism feeds on sentiment, not just economic boost to enhance spending power. The country needs a peaceful environment to encourage travelling, he added.

Thanongsak Somwong, president of the Koh Samui Tourism Promotion Association, called on the government to solve the problem quickly, otherwise its impact would be big and wide, especially on Phuket, Trang and Krabi.


Rubber protesters, govt in tense talks
The Nation / Phuket Gazette
PHUKET: The ongoing protests by rubber farmers in several southern provinces have hit logistical networks and the tourism industry in several areas adjacent to the rally sites, halting bus services as well as the transport of frozen seafood products. The authorities are worried that protesters might seize airports in four provinces where they are rallying.

Senior officials held a tense negotiation with a group representing rubber farmers yesterday as part of government efforts to end the rallies. Both sides met at the government complex in northern Bangkok, after 20 people representing four groups of rubber farmers based in Nakhon Si Thammarat agreed to seek an end to the problem through talks. The farmers are demanding that the government intervene to raise the price of raw rubber sheets.

Other groups of protesters, including those based in Surat Thani where the largest protests are taking place, refused to join the meeting with the 20-member delegation, which was flown to Bangkok on a specially chartered flight.

Prime Minister Yingluck Shinawatra held an urgent meeting with her three deputies at about 2pm at Government House yesterday, where they discussed the problems caused by the large-scale rallies. The talks with the protest delegation then began at 6pm, an hour later than scheduled, and continued behind closed doors into late evening, and beyond press time.

Fears that the protesters would seize Surat Thani Airport proved unfounded when they decided merely to camp out in its compound. However, the airports in Nakhon Si Thammarat, Krabi and Trang are still a subject of worry and authorities fear a repeat of the situation in 2008, when airports in Phuket, Krabi and Hat Yai were seized by yellow-shirt protesters.

So far, the disruption at Krabi Airport has caused 20 tourists to miss their flights, Chamnan Srisawas, chief of the Krabi tourism association said, as he called on protesters to stop blocking roads leading to the airport, especially the Tham Sua intersection.
.


Govt warned of airport seizures
The Nation / Phuket Gazette
PHUKET: Rubber growers in the South are threatening to lay siege to important places like airports and provincial halls if the government fails to answer their demand for a higher price for their produce.

Meanwhile, authorities have vowed strict law enforcement against protesters who cross the line.

“We will take legal action against protest leaders who are behind road and railway blockades,” police spokesman Maj-General Piya Uthayo said yesterday.

He added that authorities would most certainly not allow anybody to block the entrance of airports.

“If the protest spirals into airport seizures, we will invoke Article 135/1 of the Criminal Code. The maximum punishment under this clause is death,” he warned.

Piya said that in the face of threats from rubber farmers, police were now keeping a close eye on Surat Thani, Krabi and Trang airports.

“We are working with the Royal Thai Air Force in protecting these facilities,” he said.

As of press time, about 2,000 farmers had gathered and were blocking a road about 500 metres from Surat Thani Airport. However, passengers were still able to get to the airport using another road.

Deputy Prime Minister Pracha Promnog, meanwhile, has called on the protesters to talk to the government, adding that even though the authorities could not increase the rubber price significantly, it would help by reducing their costs.

“The Cabinet approved cost-lowering measures on Tuesday,” he said.

He also warned the protesters against seizing the airports, saying that relevant authorities might need to use force if the demonstrators go too far.

“We can’t allow any airport seizures,” he said.

Preparing for the worst

About 200 police officers were deployed at Surat Thani Airport to ensure immediate response if protesting farmers decided to raid the airport’s compound.

Manoon Upala, a protest leader in Surat Thani, said he would wait to hear what the National Rubber Policy Committee says today before planning his next move.

“If there’s no satisfactory response, I will coordinate with other protest leaders to seize provincial halls in various provinces, and then we will negotiate with the government from these halls,” he said.

In Nakhon Si Thammarat, rubber growers have blocked three intersections, while another major road was being blocked in Trang.

In Rayong, some 100 farmers blocked the road leadin