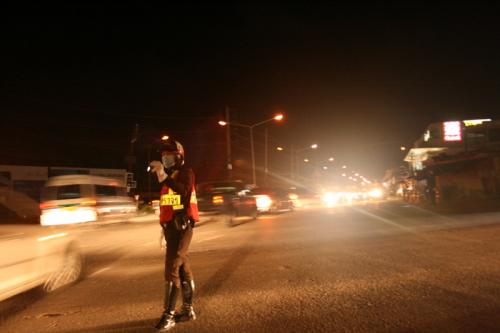 PHUKET: More power plants are needed in the South to prevent blackouts like the one that left all of Southern Thailand in the dark last night, the Electricity Generating Authority of Thailand (Egat) chief said today.

Egat Governor Sutat Patmasiriwat said the existing three plants in the South were only able to supply 1,600 megawatts of power, while the region consumes about 2,200MW.

Hence, he said, Egat had no choice but to go ahead with the coal-fired plant in Krabi and plan for more.

Last night, 14 provinces in the South were plunged into darkness for up to four hours.

Sutat said the blackout was an accident and had not been staged to justify the Krabi project.

The three existing plants – the Khanom power plant in Nakhon Si Thammarat, the Chana power plant in Songkhla and a hydro-power plant in Surat Thani – are only able to generate 1,600MW. The remaining 600 needed for the region is supplied by the central power system.

The governor explained that the consumption of electricity in the South – where several tourist destinations are located, including Phuket – had been rising at the rate of 6 per cent a year.

In addition to the coal-fired plant in Krabi, Egat building the Chana 2 plant in Songkhla, which should be ready to supply 800MW by next year.

The Krabi plant, which is currently the subject of public hearings, will produce 800MW and be ready to supply electricity in 2019.

He added that despite protests against the Krabi plant (story here), Egat had no choice but to opt for this coal-powered project because the only other alternative would be nuclear.

Sutat went on to explain that there was only enough natural gas to feed the Khanom and Chana power plants and that it would not be financially feasible to build wind, solar or bio-mass gas-powered plants. He added that Malaysia could only supply 300MW of power and it would cost as much as building a diesel-fueled plant.

“Egat has no choice but to go ahead with the Krabi plant as scheduled,” Sutat reiterated.
Tanit Sorat, vice chairman of the Federation of Thai Industries, said the blackout caused economic damage estimated at more than 10 billion baht.

Pongsak Assakul, senior chairman of the Thai Chamber of Commerce, said the outages affected the confidence of foreign investors because tourism is the key industry in the South.