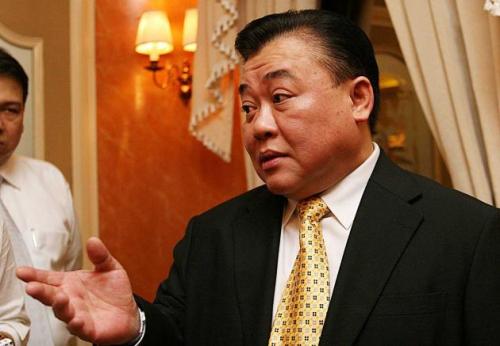 
AMLO to size up assets of Pracha, ex-official
The Nation / Phuket Gazette
PHUKET: The Anti-Money Laundering Office will evaluate assets belonging to former deputy interior minister Pracha Maleenont and a former senior Bangkok Metropolitan Administration official before pursuing possible seizure if they are found to have been acquired illegally, after both were sentenced on charges of bid-rigging in the fire vehicles case by a court on Tuesday.

Secretary-general Seehanat Prayoonrat said the AMLO needed to study the ruling by the Supreme Court’s Criminal Division for Person Holding Political Positions to see whether it had issued any sanction on both men’s assets. If so, the agency will act to seize the illegally acquired assets belonging to both the convicted, whether the assets were in Thailand or overseas.

A deputy AMLO secretary-general had earlier said that the Bt6.68 billion paid by the BMA for a large number of unused fire vehicles to a foreign manufacturer could be entirely retrieved through a seizure authorised by the National Anti-Corruption Commission (NACC), whereas the AMLO could seize only money or assets acquired through wrongdoing by convicted criminals.

While AMLO has the authority to order seizure of money or assets belonging to convicted criminals that was acquired through their wrongdoings, the NACC can seize entire amounts of cash, profits or assets to make up for losses through corruption. The NACC can file criminal or civil lawsuits, explained Suwanee Sawaengphol.

The NACC yesterday did not respond to Suwanee’s comments. It also made no statement on any plan to retrieve the Bt6.68 billion paid for the fire vehicles. On Tuesday, Pracha was sentenced to a 12-year prison term for his role in the 2004 purchase of the fire and rescue vehicles and equipment for the BMA.

Both agencies also did not state yesterday what action they might take against Pracha, and former senior BMA official Athilak Tanchookiat, who has been sentenced to 10 years, in terms of seeking compensation.

Even if the NACC takes action over the Bt6.68 billion, it will certainly be difficult for Thai authorities to reclaim the money, as there has been strong resistance through civil countersuits from Austrian manufacturer Steyr-Daimler-Puch Spezialfahrzeug AG & Co KG, which assembled and sold the fire vehicles to the BMA.

The Foreign Ministry is awaiting a written request from agencies authorised to seek the arrest of Pracha, who is believed to have fled overseas, said deputy ministry spokesman Jakkrit Srivali. He said the immigration police would know where Pracha was now, from his latest visa stamps. Pracha’s passport would expire on March 18, 2017, he added.

The 315 fire trucks and 30 fire boats sit unused at two locations in Nonthaburi and Chon Buri due to the NACC seizure order and the BMA’s refusal to accept them. Bangkok Governor Sukhumbhand Paribatra has said an arbitrator based in Switzerland is working on making use of the vehicles.

This prevents the BMA from using them, while the arbitrator cannot make any public statement about the case.

The head of the BMA’s Fire and Rescue Department, Pol Colonel Phichai Kringwatthanasiri, said although the engines of all the vehicles may still work, their tyres were all flat and it would take hundreds of millions of baht to have them replaced.

A BMA source said that the court’s ruling was being translated into English and would later be sent to the arbitrator as key evidence to add more weight to the BMA’s case seeking compensation for the non-use of the fire vehicles, because of corruption being committed and ruled accordingly by a Thai court of justice.

The BMA is also fighting two legal battles with local custodians of the parked vehicles, who are demanding extra pay for their services from the BMA.

Democrat Party leader Abhisit Vejjajiva said he was glad that former Bangkok governor and a deputy party leader Apirak Kosayodhin, who was acquitted by the court’s ruling, would return to political work, without any distraction.

Two of the Rohingya men were seriously ill and reportedly remained on the boat.

They were taken to a public park in Tambon Khon Khlan, where locals provided them with food and basic medicines, while police and district officials conducted an inspection. An initial probe found that the men left Myanmar in the boat on August 26 bound for Malaysia. Nine days later, their supply of food and water ran out, while the boat was hit by monsoon weather, causing them to drift off course. The Rohingya told police that two men died during the journey and the bodies were buried at sea. After they spotted the coast of Satun they swam to shore to survive. The migrants were kept at the park, pending further action by Internal Security Operations Command officials.


5 shot dead in Pattani attack
The Nation / Phuket Gazette
PHUKET: Five police officers working for an anti-smuggling unit were killed in Pattani yesterday when their vehicle was attacked by a group of gunmen.

Among the dead were a police major and a police lieutenant.

The attack, carried out by five or six armed men, took place on a rural road in the southern border province’s Thung Yang Daeng district, according to Colonel Pramote Prom-in, spokesman for the Forward Command of Internal Security Operation Command’s Region 4 unit in the South.

They worked for an oil-smuggling suppression team attached to the Police Operation Centre in the Southern Border Provinces. The policemen were on a mission to collect information on oil smuggling, one of the main illicit activities in the restive border region.

The bodies of four of the policemen were found lying outside their pickup truck while the other body was found inside the vehicle, according to Pol Colonel Kowit Ratanachote, superintendent of Pattani’s Thung Yang Daeng district station, which is investigating the multiple killings. He said all five officers were in plain clothes, and their vehicle had a Bangkok licence plate.

Police arriving at the scene found that the slain officers’ vehicle was ransacked and their weapons and body-armour vests had been stolen.

Isoc’s Pramote yesterday said the latest incident indicated there was a connection between the violence in the border region and the underground trade in drugs, smuggled petrol and other contraband.

Meanwhile in Yala, another southern border province, a school was ordered closed for three days from yesterday to tomorrow following an explosion on Tuesday that killed two soldier guards and injured two other people.

An executive of Kanarassadorn Bamrung 2 School said yesterday that the school would be reopened on Monday.
< — Phuket Gazette Editors