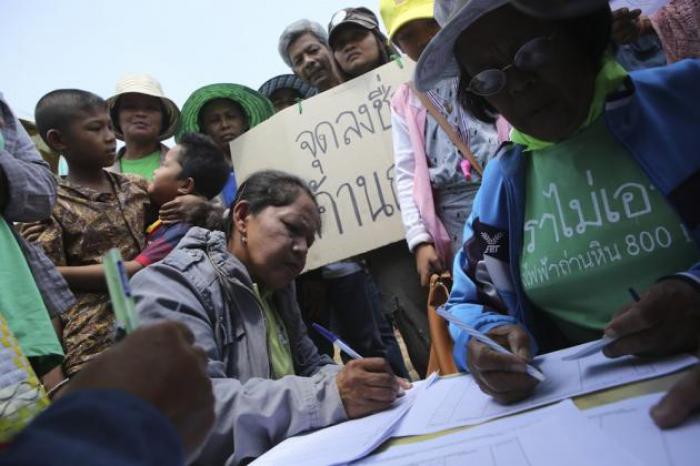 PHUKET: Villagers in the southern province of Krabi have come out in strong opposition to a coal-fired power plant and coal seaport, saying the planned project would cause pollution and damage eco-tourism industries which generate billions in baht for local people each year.

Other villagers, however, support the project and fights have broken out at public forums held in Krabi to collect opinions and concerns from local people toward the projects.

Initiated by the Electricity Generating Authority of Thailand (EGAT), the projects are aimed at supplying power of some 870 megawatts to the southern region.

In a bid to get approval from the state agency, EGAT is required to conduct an Environmental and Health Impact Assessment (EHIA) and a public hearing before going ahead with the plans.

At the beginning of the forum, EGAT explained the construction plans and impact expected from the projects.

Greenpeace Southeast Asia’s media campaigner Somrudee Panasudtha, who observed the forum, said a fight broke out during the meeting between those who opposed and those who supported the project.

She said most villagers expressed concern over pollution that could be caused from the coal activities and the potential damage to precious marine resources and tourism industries which attract thousands of visitors around the world to see coral reefs under the Andaman Sea.

The 870-megawatt coal-fired power plant is planned for Krabi’s Nua Khlong district, while the coal seaport project would be established at Ban Klong Ruo.

According to the Greenpeace report, the Ban Klong Ruo coal seaport project is a new plan by EGAT to find ways of transporting imported coal from Indonesia, Australia and Africa to its coal-fired power plant. The environmental watch agency said that the port would lie in Taling-chan sub-district, Klong Kanan district, which is the part of an area listed as wetlands of international importance.

Throughout the year, including the monsoon season, the unloading of coal from larger ships to smaller ones would take place at sea around Koh Lanta. The coal will be unloaded again at Ban Klong Ruo coal seaport to an 8.4 kilometre-long conveyer belt to deliver coal to the power plant.

PHUKET: Election Commissioner Prawit Rattanapian expects a problem-free Senate election on March 30 and a voter turnout of at least 70 per cent.

Meanwhile, Pheu Thai spokesman Prompong Nopparit urged the Election Commission (EC) to organise the follow-up general election on the same day in order to save the country money.

Prompong said that doing so could also prevent protesters’ obstructing the polls because many Senate candidates in the South were relatives of Democrat Party politicians.

Prawit said that although the 457 registered Senate candidates were down 10 per cent on the 2008 Senate election, people still had enough choices in each province while the election preparation was going smoothly.

On March 11, the EC would discuss calls for a fresh general election to be held on March 30, Prawit said, adding that there were sufficient grounds to consider the request but that commissioners held differing opinions on the matter.

PHUKET: People’s Democratic Reform Committee leader Issara Somchai insisted he was innocent after Chachoengsao Provincial Court approved an arrest warrant against him for alleged attempted murder and detention of a red shirt who was brutally attacked and thrown into Bang Pakong River.

The court on Friday also approved arrest warrants for five other suspects over the attack on security guard Yuem Nillar, 33, who was thrown in the river with his arms and legs tied.

The arrest warrants were issued after Yuem spoke to police.

He said the five other alleged attackers were PDRC guards who found him carrying a pro-government United front for Democracy against Dictatorship card at a PDRC rally.

He alleged he was detained at the site for five days and taken to the river.

Issara, who faces five charges including assault, depriving of freedom and theft, said he would turn himself in once the PDRC protest ends.

“There is no reason that I had to lead a group of people to kill a person,” he said.

“He is only a red shirt without any prominent role. Had we found him coming to our rally, we could have brought him on our rally stage or driven him out of our rally site.”

He said it was possible he had been implicated because he was well known.

Taxi shot up in Lumpini Park after argument with protest guards: driver
The Nation / Phuket Gazette

PHUKET: Several gunshots were fired at a taxi early yesterday morning, resulting in the driver being slightly injured after a bullet fragment grazed his forehead.

Following the shooting report at Bangkok’s Lumpini Park Gate 1 at about 2.45am, police found the orange taxi with all its windows smashed, two tyres flat and bullet holes in a front door.

The driver, Narasak Pulma, 30, waited for police at the scene but his passenger left before police arrived.

The driver was treated at Police General Hospital.

Narasak told police that he took a drunken man from the Rama II area to the park, where the customer wanted to pick up a prostitute.

He said that while the man and the sex worker were negotiating a price, anti-government protest guards shouted out from the park for the taxi to go away, so the passenger shouted abuse at the guards.

A firecracker went off and was followed by several gunshots.

Narasak said he and the passenger then ran from the taxi.

Boy, 16, kills parents, then himself
The Nation / Phuket Gazette

PHUKET: A 16-year-old boy shot his parents dead before turning a gun on himself yesterday at their home in Thanyaburi in Pathum Thani, just north of Bangkok.

After a report at 4pm of a triple homicide, police from Pratuman Chulalongkorn precinct rushed to a two-storey house in tambon Prachathipat and found the three bodies, each with a gunshot to the head, in a second floor bedroom.

Bodies of the parents were covered with a blanket on the bed, while the boy’s body was found on the floor with a 9mm pistol in his right hand.