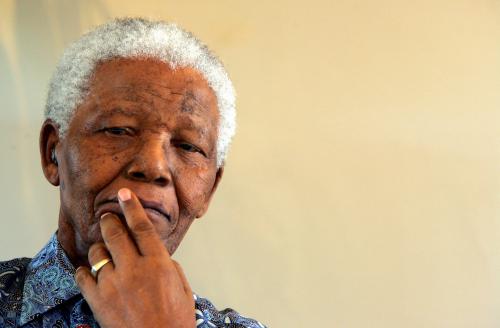 
World mourns death of Nelson Mandela
Reuters / Phuket Gazette
PHUKET: South African anti-apartheid hero Nelson Mandela died aged 95 at his Johannesburg home on Thursday after a prolonged lung infection, plunging his nation and the world into mourning for a man hailed by global leaders as a moral giant.

Although Mandela had been frail and ailing for nearly a year, Zuma’s announcement late on Thursday of the death of the former president and Nobel Peace Prize laureate shook South Africa.

Tributes began flooding in almost immediately for a man who was an iconic global symbol of struggle against injustice and of racial reconciliation.

U.S. President Barack Obama said the world had lost “one of the most influential, courageous and profoundly good human beings that any of us will share time with on this earth”.

British Prime Minister David Cameron called Mandela “a hero of our time” and said “a great light has gone out in the world”.

Ordinary South Africans were in shock. “It feels like it’s my father who has died. He was such a good man, who had good values the nation could look up to. He was a role model unlike our leaders of today,” said Annah Khokhozela, 37, a nanny, speaking in Johannesburg

A sombre Zuma made a national broadcast to announce the death of South Africa’s first black president, who emerged from 27 years in apartheid prisons to help guide Africa’s biggest economy through bloodshed and turmoil to democracy.

“Our people have lost a father. Although we knew this day was going to come, nothing can diminish our sense of a profound and enduring loss. His tireless struggle for freedom earned him the respect of the world. His humility, passion and humanity, earned him their love,” he added.

Mandela would receive a full state funeral, Zuma said, ordering flags to be flown at half mast.

The U.N. Security Council was in session when the ambassadors received the news of Mandela’s death. They stopped their meeting and stood for a minute’s silence.

Obama, the first black American president, described Mandela as an inspiration: “Like so many around the globe, I cannot fully imagine my own life without the example that Nelson Mandela set, and so long as I live I will do what I can to learn from him,” he said in a televised address at the White House shortly after the announcement of Mandela’s death.

“A free South Africa at peace with itself – that’s an example to the world, and that’s Madiba’s legacy to the nation he loved.

Mandela rose from rural obscurity to challenge the might of white minority apartheid government – a struggle that gave the 20th century one of its most respected and loved figures.

He was among the first to advocate armed resistance to apartheid in 1960, but was quick to preach reconciliation and forgiveness when the country’s white minority began easing its grip on power 30 years later.

He was elected president in landmark all-race elections in 1994 and retired in 1999.

“His life gives us the courage to push forward for development and progress towards ending hunger and poverty,” it said in a statement.

He was awarded the Nobel Peace Prize in 1993, an honour he shared with F.W. de Klerk, the white Afrikaner leader who released from jail arguably the world’s most famous political prisoner.

As president, Mandela faced the monumental task of forging a new nation from the deep racial injustices left over from the apartheid era, making reconciliation the theme of his time in office.

The hallmark of Mandela’s mission was the Truth and Reconciliation Commission which probed apartheid crimes on both sides of the struggle and tried to heal the country’s wounds. It also provided a model for other countries torn by civil strife.

In 1999, Mandela handed over power to younger leaders better equipped to manage a modern economy – a rare voluntary departure from power cited as an example to African leaders.

In retirement, he shifted his energies to battling South Africa’s AIDS crisis, a struggle that became personal when he lost his only surviving son to the disease in 2005.

Mandela’s last major appearance on the global stage came in 2010 when he attended the championship match of the football World Cup, where he received a thunderous ovation from the 90,000 at the stadium in Soweto, the neighbourhood in which he cut his teeth as a resistance leader.

Charged with capital offences in the infamous 1963 Rivonia Trial, his statement from the dock was his political testimony.


Hurricane-force winds wreak havoc in Britain, head to Europe
Reuters / Phuket Gazette
PHUKET: Hurricane-force Storm Xaver blasted towards mainland Europe on Thursday after cutting transport and power in northern Britain and killing three people in what meteorologists warned could be the worst storm to hit the continent in years.

British authorities said the Thames Barrier, designed to protect London from flooding during exceptional tides, would shut on Thursday night and warned of “the most serious coastal tidal surge for over 60 years in England”. Prime Minister David Cameron called two emergency meetings to discuss strategy.

Two people were killed in Britain as the nation’s weather office measured winds of up to 225 km per hour (140 mph) when the storm slammed Scotland and parts of England.

A lorry driver was killed and four people injured when his vehicle overturned and collided with other vehicles in West Lothian, Scotland, police said, while a second man died near Nottingham in central England when he was hit by a falling tree.

In western Denmark the 72-year-old female passenger of a truck died when the vehicle overturned in high winds.

More than 100,000 homes were left without power across Britain, 80,000 of them in Scotland, according to energy company SSE.

North Sea oil and gas producers including ConocoPhillips, Maersk Oil, and Statoil cut production and evacuated staff from some platforms.

All train services in Scotland were cancelled on Thursday morning due to debris on the tracks but services were slowly restored during the day. Lifeboat crews were called to rescue people from flooded homes in Rhyl in north Wales.

Low-lying coastal areas of eastern England were waiting for the storm to hit on Thursday evening, with the Environment Agency issuing 41 severe flood warni