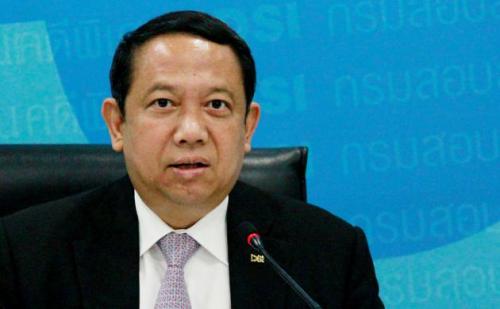 
Study reveals truth behind Thailand’s gambling addiction
Phuket Gazette
PHUKET: The “underground lottery” remains the most popular form of gambling in Thailand with an estimated capital of Bt100 billion per year, while the government lottery follows with a capital of Bt76.77 billion, a study by Chulalongkorn University’s Social Research Institute revealed yesterday.

The study on gambling in Thailand was carried out by Dr Pinij Larpthananon, a researcher at the institute, along with his associates. It was conducted on 5,042 respondents aged over 15, from 16 provinces.

Responses indicated that most people (64.2 per cent) had gambled in the past year and over 63 per cent used to gamble when they were under the age of 24. The youngest “gambler” was a seven-year-old.

Based on the results of respondents, the study also calculated the different types of gambling practised as a percentage number of Thailand’s population. The underground lottery came top with an estimated 19,923,643 gamblers, followed by the government lottery with 19,211,727 gamblers.

Ranked third, was illegal gambling dens with an estimated 3,125,705 gamblers, followed by football betting with 1,067,418 gamblers. In fifth was gambling on local sports with approximately 883,592 gamblers, the study said.

Phongsathon Chantharassami, manager of the Information Centre for Gambling Control Policy, under the Sodsri-Saridwongsa Foundation, said law enforcement was the key to tackling illegal gambling in the country. Citing a Royal Thai Police report that said police had made 3,988 gambling-related arrests in the first half of this year, Phongsathon said it demonstrated that the current law on gambling was out-of-date and ineffective in tackling the problem.

As for the gambling act draft legislation, which was approved by the Cabinet in principle in October 2011 and would soon be submitted to the Council of State consideration, Phongsathon expressed concern that it didn’t accurately cover the modern world of gambling. One example, he said, was the fact that it made no reference to the growing problem of gambling among children and young people.


Bt343 billion budget sails through the House
Phuket Gazette
PHUKET: The Bt343-billion central budget for 2014 sailed through the House despite the opposition’s attack on the government’s inefficient spending last year.

During the deliberation, Democrat MP Watchara Pechthong pointed out that the government had used Bt600 million in all to curb anti-government rallies – Bt200 million to control the Pitak Siam protest last year and Bt400 million to deal with the rallies against the amnesty bill.

In addition, he said, Bt2 billion of the national budget has been spent to compensate and rehabilitate the red-shirt protesters who took part in the 2010 political turmoil, while Bt10 billion was earmarked for Prime Minister Yingluck Shinawatra’s trips overseas.

In defence, Foreign Minister Surapong Tovichakchaikul said the PM’s trips were not for pleasure but to promote Thai businesses and tourism, which would contribute a lot more compared to the cost of the trips.

However, Democrat Bangkok MP Vilas Chanpitaksa presented different numbers. Citing a document from the PM’s Office, he called into question the Bt340-million budget approved for police and military operations to provide security during the Pitak Siam rally in November last year.

The police were granted Bt335 million, the Army Bt600,000, the Navy and Air Force Bt48,000 each, and the Internal Security Operations Command Bt3.5 million, the MP said.

“I really have doubts about the sixth item, which is Bt200 million compensation that the Royal Thai Police transferred for a ‘secret mission’ to conduct intelligence work. I wonder if it was really for making money [illicitly], as the allowances, accommodation and wage costs comprised Bt139 million altogether,” he said.

“However, transferring a secret budget cannot be done unless it is identified in the annual budget bill. The government and people involved were smart. Before they asked for approval from the Cabinet on November 20, 2012, the Cabinet had already approved it in principle, saying the protesters were likely to surround Government House, Parliament, besiege the premier and so on, and instigate a situation,” Vilas said.

The central budget, which is not allocated to particular agencies, is part of the total annual budget. The meeting on Wednesday night voted 287:107 in support of cutting Bt31.9 billion from the total Bt2.525-trillion annual budget.

PM’s Office Minister Varathep Ratanakorn said all spending from the government’s central budget in cases of emergency and for other necessities such as the prime minister’s official trips required the approval not only of the prime minister, but of the Cabinet as a whole.

The Cabinet did not always grant such spending requests, he added.

Varathep said spending on Yingluck’s trips abroad was necessary – especially for trips made at other countries’ invitation – as this is her first term and she had to strengthen international relations. Spending was always done according to the regulations, the minister said.

The biggest portion of travel costs went towards airfares. For 2011 and 2012, the budget for airfares was set at Bt61 million, and Bt80 million for 2013, he said, adding that Bt55 million had been earmarked for next year.

Meanwhile, Varathep said there had been no budget allocation for Yingluck’s proposed political reform council.

The House voted 291:126 to pass Article 4 of the 2014 Budget Bill on the allocation of the central budget, following the vetting committee’s proposal that it be brought down to Bt343 billion from Bt345 billion.


Tarit slammed on stance over bogus pic
Phuket Gazette
PHUKET: The Democrat Party yesterday cast doubt on the judgement of Tarit Pengdith, director-general of the Department of Special Investigation, for agreeing to look into the allegedly doctored picture of Prime Minister Yingluck Shinawatra that was posted on the Internet by a Democrat spokeswoman.

Democrat MPs including their leader Abhisit Vejjajiva questioned how this situation meets the qualifications for a case to be taken up by the DSI.

On Wednesday, Winyat Chartmontree, a lawyer for the United Front of Democracy against Dictatorship, petitioned the DSI to probe Democrat spokeswoman Mallika Boonmeetrakul for posting the altered picture of Yingluck taken with a sign of Kui Buri National Park.

Tarit said he immediately ordered that the complaint be accepted as a special case, which takes priority over other inquiries.

“I am not taking the side of politicians or serving politicians [in power]. But a prime minister is the head of the country. I have to do this, as the message is a Thai expression. It is a statement understandable as to what it means. Besides, the complainant clearly asked [us] to probe all people involved. So the DSI will investigate [everyone] from Mallika to the people who shared the picture,” Tarit said on Wednesday.

According to the law, it is the special case committee, not only the DSI director-general, that decides whether a suspected crime warrants the DSI’s