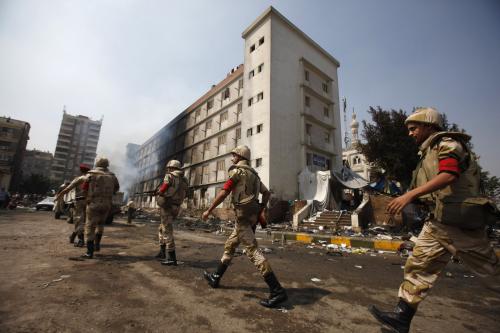 PHUKET: Deeply polarised Egypt braced for renewed confrontation on Friday after the Muslim Brotherhood called for a nationwide march of millions to show anger at a ferocious security crackdown on Islamists in which hundreds were killed.

Defying criticism from major Western allies, Egypt’s army-backed government warned it would turn its guns on anyone who attacked the police or public institutions after protesters torched a government building in Cairo on Thursday.

At least 623 people died and thousands were wounded on Wednesday when police cleared out two protest camps in Cairo set up to denounce the military overthrow on July 3 of Egypt’s first freely elected president, Islamist leader Mohamed Mursi.

It was the third mass killing of Mursi supporters since his ouster. The assault left his Muslim Brotherhood in disarray, but they warned they would not retreat in their showdown with army commander General Abdel Fattah al-Sisi.

“After the blows and arrests and killings that we are facing, emotions are too high to be guided by anyone,” said Brotherhood spokesman Gehad El-Haddad.

A statement from the Brotherhood called for a nationwide “march of anger” by millions of supporters on Friday after noon prayers.

“Despite the pain and sorrow over the loss of our martyrs, the latest coup makers’ crime has increased our determination to end them,” it said.

The Brotherhood accuses the military of staging a coup when it ousted Mursi. Liberal and youth activists who backed the military saw the move as a positive response to public demands.

Friday prayers have proved a fertile time for protests during more than two years of unrest across the Arab world.

In calling for a “Friday of anger,” the Brotherhood used the same name as that given to the most violent day of the 2011 uprising against former President Hosni Mubarak. That day, January 28, 2011, marked the protesters’ victory over the police, who were forced to retreat while the army was asked to step in.

In a counter move, a loose liberal and leftist coalition, the National Salvation Front, called on Egyptians to protest on Friday against what it said was “obvious terrorism actions” conducted by the Muslim Brotherhood.

Signalling his displeasure at the worst bloodshed in Egypt for generations, U.S. President Barack Obama said on Thursday normal cooperation with Cairo could not continue and announced the cancellation of military exercises with Egypt next month.

“We deplore violence against civilians. We support universal rights essential to human dignity, including the right to peaceful protest,” he said, taking a brief break from his holidays to deliver the sharp rebuke.

The United States on Thursday renewed a warning to its citizens to leave Egypt because of the ongoing unrest. It issued the same advice last month.

The Egyptian presidency issued a statement saying Obama’s remarks were not based on “facts” and would strengthen and encourage violent groups that were committing “terrorist acts.”

Washington provides Egypt with $1.5 billion in annual aid, most of it military. But its influence over Cairo has been called into question during the recent turmoil, which has seen Saudi Arabia, Kuwait and the United Arab Emirates pledge $12 billion in assistance, making them more prominent partners.

U.S. Defence Secretary Chuck Hagel issued s statement saying he had called al-Sisi on Thursday to say Washington would maintain its military relationship with Egypt, but he also warned him that the recent violence was putting defence cooperation at risk.

“Since the recent crisis began, the United States has made it clear that the Egyptian government must refrain from violence, respect freedom of assembly, and move toward an inclusive political transition,” he said.

“I reiterated that the United States remains ready to work with all parties to help achieve a peaceful, inclusive way forward,” Hagel said.

The Arab nations’ cash, which started arriving in July, is aimed at stabilising Egypt’s wobbling economy, which is suffering from a ballooning budget deficit and high inflation.

This week’s carnage will do further damage to state coffers. The government has set a dawn-to-dusk curfew that it says will last at least a month, a move that will deal a further blow to the crucial tourism industry.

On Thursday, the U.N. Security Council urged all parties in Egypt to exercise maximum restraint.

“The view of council members is that it is important to end violence in Egypt,” Argentine U.N. Ambassador Maria Cristina Perceval told reporters after the 15-member council met on the situation.

Turkish Prime Minister Tayyip Erdogan had earlier also called for the U.N. Security Council to convene quickly after what he described as a massacre in Egypt and criticised Western nations for failing to stop the bloodshed.

The streets of Cairo were unusually quiet on Thursday, many shops remaining shuttered as people stayed away from work.

However, there was little sympathy for the Brotherhood, which won all five elections following Mubarak’s downfall in 2011 but was accused of incompetence and partisanship during Mursi’s brief time in charge.

“We didn’t want this to happen, but at the end of the day they pushed us to do it,” said Mahmoud Albaz, 33, an actor and real-estate agent who lives near the Brotherhood protest camp at the Rabaa al-Adawiya mosque, now blackened by fire and soot.

Many of those who died on Wednesday were still laid out more than a day later in Cairo morgues and at a city mosque. Their families accused the government of putting bureaucratic hurdles in their way to make it hard to obtain permission to bury them.

Under Islamic tradition, bodies ought to be buried within 24 hours of death.

“We arrived at 7 a.m. The whole family is here,” said Atif Hashim, a 50-year-old teacher, who was in line, waiting to collect the body of his cousin, a father of five young children.

“They just drink tea inside, they just throw the bodies on the floor with some ice,” he said of officials in the morgue.

PHUKET: An initial investigation into the wreckage of the UPS cargo jet that crashed on approach to Birmingham, Alabama’s airport has found no evidence of pre-impact fire or engine failure, the National Transportation Safety Board said on Thursday.

The so-called black boxes will be sent to the NTSB headquarters in Washington for evaluation of possible clues about the cause of the fiery crash of the United Parcel Service Inc aircraft in which two pilots were killed, Robert Sumwalt, a senior NTSB official, told a press conference in Birmingham.

Sumwalt said the flight data and cockpit voice recorders were covered in debris and plastic that melted in the fire and then hardened onto them. It took three hours to dig them out.

Investigators hoped to get them opened later Thursday and should know by Friday whether the data is still good.