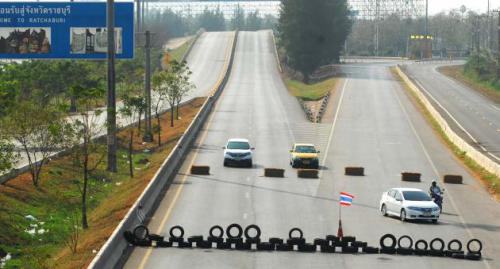 
Defiant farmers maintain blockades, draw up petition
The Nation / Phuket Gazette
PHUKET: While one group of rice farmers today brings tractors and trucks to rally outside the Commerce Ministry in Nonthaburi – to pressure for long overdue payments from the rice-pledging scheme – another group from the north will submit a royal petition this morning.

Meanwhile, rice farmers from western provinces are continuing their Rama II Road blockade at the Wang Manao intersection in Ratchaburi’s Pak Tho district, which began on February 1.

Protest leader Rawee Rungreung said they would also rally at the ministry to demand answers about their pledged rice and overdue payments.

Rawee said the farmers had to do something because they were severely affected.

The rice-growing season was approaching but farmers who normally earned money twice a year, according to seasonal rice harvests, had no money to pay for their rice-growing costs as well as household and personal expenses.

Rawee insisted this wasn’t a politically motivated move and the farmers wouldn’t completely relocate their rally from Rama II Road to the ministry.

Rather, they would send some demonstrators while the rest remained at the southbound road.

He said his group would suspend their movement to gather names of the farmers affected by the scheme to submit a petition to the Bureau of Royal Household.

Some 500 farmers from Phichit, Nakhon Sawan, Sukhothai, Kamphaeng Phet and Phitsanulok for the third day yesterday continued to camp on Asian Highway 117 near a branch of the Bank of Agriculture and Agricultural Cooperatives at Po Sai Ngam intersection in Phichit’s Bung Narang district.

Group leader Prakasit Jamjumrus, who is president of Tambon Tai Nam Administration Organisation in Phichit’s Pho Thale district, said they had gathered 1,000 names for the royal appeal. Some 200 farmers and protest leaders would travel to Bangkok later last night to join other farmers in submitting the petition to the bureau this morning, he said.

Another protest leader, Manu Maneechote, said that after the 200-strong group departed for Bangkok, the remaining farmers would clear away the rally site on Asian Highway 117. They would later discuss the next move after those submitting the petition returned to Phichit, he added.

In Kanchanaburi’s Tha Muang district, some 300 rice farmers from tambon Nong Khao blocked an intersection on Asian Highway 324 with tractors, 10-wheel trucks and a pick-up truck as well as five tents yesterday morning.

Deputy Governor Suriyan Kanchanasilpa and senior officials tried to negotiate with them but they continued rallying at press time.

They demanded by February 12 the caretaker government honour pledged rice payments of at least 80 per cent of the amount stated on each farmer’s rice-pledging certificate.

The group also wanted the caretaker government to help farmers in talking with their creditors including BAAC, commercial banks and agricultural co-ops, because they didn’t want creditors taking away their tractors or tools.


EC to tackle problems arising from disrupted poll
The Nation / Phuket Gazette
PHUKET: The Election Commission (EC) will meet today to decide how to resolve major problems stemming from the February 2 election, a source from the EC said yesterday.

The source said the poll organiser would hold discussions with its legal advisory team before seeking solutions for the problems, which include how to hold elections at polling stations where voting was disrupted; advance voting; and how to handle 28 constituencies in the South where no candidates are registered.

Meanwhile, Pheu Thai Party spokesman Prompong Nopparit yesterday filed a complaint with the EC, asking it to seek a court order to dissolve the Democrat Party.

Prompong alleged that the Democrats had violated Article 68 of the Constitution by seeking to overthrow the democratic system through their support for protesters in blocking the February 2 election.

The complaint alleges that the Democrats supported the People’s Democratic Reform Committee (PDRC), which is led by former Democrat MP Suthep Thaugsuban, in blocking the election.

Prompong also handed over video CDs of the PDRC’s protests and blockades of party-list candidacy registration, advance voting and the February 2 election.

Prompong said the Democrats had asked the Office of the Ombudsman to seek a ruling by the Constitutional Court to annul the election because the Democrats wanted to overthrow an elected government.

“The country is embroiled in problems now because Democrat Party leader Abhisit Vejjajiva and Suthep would not accept the rules of the nation. Although the government dissolved the House and set a new election date, the Democrats refused to contest the election and used the [call for] reforms as an excuse to further its own political interests,” Prompong said.


Court rejects complaints filed by Democrat, Pheu Thai
The Nation / Phuket Gazette
PHUKET: The Constitutional Court has rejected a complaint submitted by members of the Democrat Party to have the Pheu Thai Party dissolved.

The Democrats claimed that by holding the February 2 election while parts of the country were placed under the emergency decree, Pheu Thai caused the election to be unfair and not free. The court, by a majority ruling, said there were insufficient grounds to conclude that the imposition of the emergency decree during the election violated Article 68 of the Constitution as claimed by the complainants – Wirat Kalayasiri, former Songkhla MP for the Democrat Party, and Paiboon Nititawan, former Democrat party-list MP.

Article 68 of the charter stipulates that it is one’s right to protect the Constitution and also prohibits any act that would seek change or the obtaining of power through unconstitutional means.

The article also permits dissolution of political parties found to have done this, and can ban party executives from participating in political activities for five years.

In a related development, the court also rejected a complaint filed by a member of the Pheu Thai Party, Singthong Buachum, accusing the anti-government People’s Democratic Reform Committee (PDRC) and its affiliates of wanting to overthrow the political system. The court said the charges could be laid against figures within PDRC, or specific actions by the movement which violated the criminal code or other laws – but the right to freedom of assembly is guaranteed under the Constitution and the PDRC protest stemmed from its opposition to the government’s bid to pass the blanket amnesty bill.