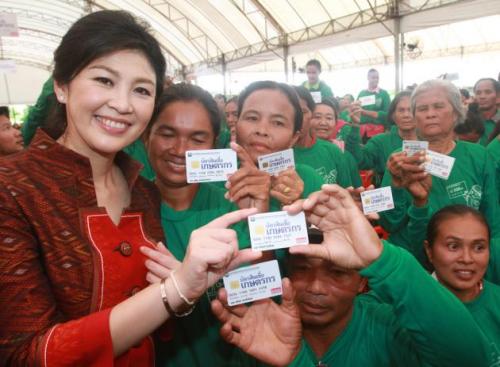 PHUKET: Launched two years ago, the farmers’ credit-card scheme has proved to be anything but a success. As of June, only about Bt10 billion of credit was outstanding in the first phase from the total budget of Bt57 billion, according to the Bank for Agriculture and Agricultural Cooperatives (BAAC).

Armean Thaupmungkung, a consultant to farmers’ associations, preferred the government rice-pledging scheme’s guarantee of Bt15,000 per tonne. Besides increasing the debt burden on farmers, the card scheme failed because not many merchants joined, and they usually offer a limited choice of products, he said.

“If the government continues this project, it should give farmers cash credit. If farmers have to go into debt, they should have the right to buy any brand they want at any shop,” he said.

The scheme should also be extended to cover all 13.5 million farmers instead of just the 2.4 million now, he said. The government plans to boost it to 4 million with extra benefits.

Apirom Sukprasert, executive vice president of BAAC, still insists that the project is worthwhile. Of the 4.5 million eligible farmers – those enrolled in the bank’s debt-restructuring scheme – the bank planned to issue cards to 2 million in the first phase.

Farmers were first reluctant to use the cards, not fully understanding the payment terms. Though each farmer could borrow up to Bt50,000, the average usage was only Bt10,000. Merchants were reluctant to join the scheme because they could not stomach the five-month grace period for interest.

Some farmers complained about high prices, but other shops might have lowered their prices to compete with the project, he said.

“It’s not a scheme to boost farmers’ debt, but to boost their purchasing power as well as transfer non-organised debts into the controllable system,” he said.

The farmers’ credit-card scheme was one of the election campaign planks of the Pheu Thai government. From February-March of last year, the scheme was launched in five provinces – Chiang Mai, Udon Thani, Ayutthaya, Lop Buri and Saraburi. It was extended to all 77 provinces in June 2012.

In the first phase, farmers could charge four goods on their cards – seeds, fertilisers, pesticides and fuel. Interest was waived for the first five months and then they were charged at the minimum retail rate of 7 per cent. The project is one of several designed for farmers, besides those to shore up the prices of rice, tapioca and rubber.

A BAAC source said outstanding credit under the scheme as of June was Bt8.3 billion, of which only Bt322 million could turn bad.

A survey by the bank’s research centre from September 7-27 of last year, covering 733 farmers, showed that 47.3 per cent were satisfied with the scheme thanks to its convenience, while 24.7 per cent were pleased with the new distribution channel and 16.4 per cent with the lower cost.

However, at least 15,000 cardholders exited the programme, of whom 26.6 per cent cited the credit limit as not correlating with material costs and 25.9 per cent the lack of enough merchants.

Prime Minister Yingluck Shinawatra yesterday announced extra benefits in the hope that they would help drive cardholders to 4 million by September. Annual health check-ups, accident insurance and the purchase of groceries would be added under the second phase of the project.

In front of a crowd of over 15,000 in Buri Ram, Deputy Prime Minister Kittiratt Na-Ranong said the second phase will extend coverage to rubber, sugarcane, tapioca, fisheries and livestock farmers, while the retail network will be expanded to at least one shop per village – or at least per 10,000 people. PTT and Bangchak Petroleum fuel stations will also be roped in.

“The cards offer more than credit. They offer production and financial security,” Yingluck said. Heavily attacked for the rice-pledging scheme due to its massive losses, the government aims to lower the pledging price for the next harvest season. According to the most recent Suan Dusit Poll, the pledging scheme drew huge public support but was also the biggest factor that tainted the government’s popularity.

To avert attacks by farmers angered by the reduced pledging price, the government would provide other forms of assistance. The focus has now turned to the credit card scheme and agricultural zoning.

PHUKET: The Department of Special Investigation (DSI) will directly ask US authorities to cancel the visa for the notorious Luang Pu Nenkham, who officially lost his status as a monk on Saturday. Luang Pu Nenkham is believed to be in the United States.

The DSI is investigating his many alleged wrongdoings, including statutory rape of a minor and public fraud.

DSI chief Tarit Pengdith yesterday said his agency was coordinating with various authorities in a bid to bring the former monk to justice.

At 10am today, DSI investigators will convene a meeting to prepare for the issuance of an arrest warrant for Luang Pu Nenkham.

The Office of National Buddhism has asked the centre controlling the overseas travel of monks and novice monks to consider cancelling Luang Pu Nenkham’s passport. The centre is due to look into the case today.

Phra Prommawethi, who chairs the centre’s board, said yesterday his centre would only be able to offer an opinion on the case, as the mandate to revoke a passport lay with the Foreign Affairs Ministry.

“After we form the opinion, we will submit it to the Office of National Buddhism. Then, the office should be able to raise the issue with the ministry and see what can be done,” the senior monk said.

Phra Prommawethi is the abbot of Wat Traimitr Withayaram and a member of the Supreme Sangha Council.

In the wake of the scandal, Ubon Ratchathani Rajabhat University president Prachoom Pongpan said the university’s council would consider revoking the honorary doctorate it had earlier approved for Luang Pu Nenkham.

“The council will convene a meeting to discuss and decide on the issue on July 26.” He said the council conferred the degree on the then famous monk in 2010.

PHUKET: The Forestry Department will ask the Cabinet to issue guidelines governing the use of oil palm plantations where concessions have expired to try to cut chronic conflict between landless farmers and companies, after clashes with officials when farmers went on to forest reserves.

“The department needs to wait for Cabinet’s decision to point out which direction we should take,” Boonchob Suthamanuswong, director-general of the department, said yesterday.