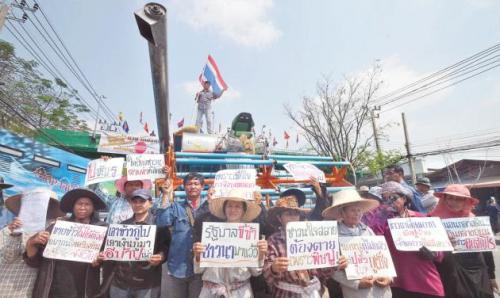 
Farmers raise pressure
The Nation / Phuket Gazette
PHUKET: Furious rice farmers yesterday piled pressure on the government by taking their protest to the capital, amid claims that they were part of a plot to bring down the government.

Thousands of farmers from the Northeast, the Central and the West gathered at the Commerce Ministry in Nonthaburi. Many of them brought their tractors and farm trucks with them They urged the caretaker government to pay them for paddy sold under the government’s rice-pledging scheme.

They camped out overnight outside the ministry compound.

The farmers said they had lost trust in the government after it failed repeatedly to keep its promise of giving them their long-overdue payment. They said the government had betrayed them and sought its resignation in 15 days so that they could receive their dues.

Also, the group called on the government to check the quality of rice stored at various granaries.

Prasith Boonchuey, president of the Thai Rice Farmers Association, said many farmers were disappointed with this government since it could not keep its promise.

“The government now owes about Bt130 billion to farmers,” he said.

Another group of farmers from Sing Buri, Chai Nat and Ang Thong made a written request for the National Anti-Corruption Commission to probe the government’s failure to pay for rice from the latest crop.

Winai Lamnoo, a leader of the group, said farmers have been waiting for eight months for the overdue payments.

Meanwhile, Pheu Thai Party spokesman Prompong Nopparit said there was a movement to incite the rice farmers against the government.

“They told the farmers that this government has no money to pay them and it needs to be overthrown,” he said.

Suthep Thaugsuban, leader of the anti-government campaign, told protesters that his People’s Democratic Reform Committee might consider stealing from warehouses where government rice is being stored in order to get money for the farmers.

“I have already been charged with insurrection. Another charge of stealing rice should be fine,” he said.

The PDRC plans to stage another march in Bangkok today to raise funds for the farmers, its spokesman Akanat Promphan said.

Prime Minister Yingluck Shinawatra yesterday pleaded on Facebook with the farmers to be sympathetic while blaming the anti-government rallies for the delay in payments for the pledged paddy.

She insisted on continuing the rice-pledging project as this could help improve farmers’ lives and reduce inequality in society. As the political unrest over the past four months has led to the House dissolution, the caretaker government faces limitations.

“The Finance Ministry is finding a way to secure funds within the legal limitations while the Commerce Ministry is accelerating sales of rice from stockpiles. Proceeds from doing this will quickly pay off farmers,” she promised on her page.

However, recent research by the Thailand Development Research Institute on the benefits of the rice-pledging scheme found that only 18 per cent of poor farmers, who make up 30 per cent of all farmers, had benefited from the project. However, 82 per cent of the rich and middle-income farmers were beneficiaries.

Worawit Chalimpamontri, president of the Government Savings Bank, denied that the bank’s board of directors had never discussed about lending to the government for the rice-pledging scheme as rumoured.

“We are worried about the law. Whether the government can get additional loans under law is still unclear. We are also worried about bank depositors, who feel discontented about this matter,” he said.

The Foreign Trade Department said it would on Wednesday open bidding for 100,360.74 tonnes of white rice for export and 367,261.87 tonnes of rice for the domestic market.

To mitigate the financial burden on farmers, who have suffered from the delay in payment, the Commerce Ministry encouraged rice millers to volunteer for a project to help provide farmers with loans.

Deputy Commerce Minister Yanyong Phuangrach said this project was not finalised. The rough idea was that the government would redress all interest on farmers who borrow from the millers, but cap the rate at 9 per cent. The farmers can borrow from millers up to 50 per cent of the value of the paddy they had pledged and use the pledge receipts as collateral.

Election commissioner Somchai Srisuthiyakorn said he and his four fellow commissioners would convene a special meeting at Thammasat University’s Rangsit campus in Pathum Thani this morning to discuss the issue and seek ways of solving these problems.

He said the EC’s legal advisers would also take part in the discussion. “There are several legal issues at hand, but I believe we will be able to find solutions,” Somchai said, adding that he did not think any decision made at the meeting would affect the senatorial election scheduled for March 30.

Somchai said the EC had to be careful in making a decision in response to the ongoing problems in order to avoid possible legal action by people who are affected.

The problems the EC has to deal with are 28 constituencies with no candidates; more than 12,000 polling stations not being open to voters; about 10 million voters not being able to cast their ballots; the need for a new round of advance voting; and 16 constituencies having only one candidate each.

The EC will also decide today if it should seek a Constitutional Court ruling in relation to the 28 constituencies that have no candidates, Somchai said.

Officials without an office

Since anti-government protesters have besieged the Government Complex in Nonthaburi, which houses the EC office, the commissioners are having to work elsewhere.

Meanwhile, Somchai said the EC would invite some government figures and former election commissioner Sodsri Sattayathum to a meeting to discuss how the February 2 national election can be made successful.

He said the EC might also offer explanations to foreign diplomats and representatives from international organisations about the problems regarding Sunday’s election.

Bhokin yesterday blamed the EC for failing to prevent many of the problems from taking place, claiming these problems had been intentionally created to disrupt the poll.

Separately, opposition Democrat Party leader Abhisit Vejjajiva yesterday insisted that the election was unconstitutional, and said the election should be rescheduled in a way that is acceptable to all parties involved “so the country can progress”.

He said it appeared that the government had failed to use Sunday’s election to claim legitimacy.

The election saw low voter turnouts in many areas and millions of “no votes”, in which voters cast their ballot but