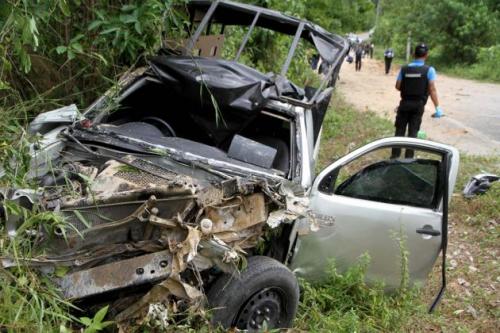 The violence continued unabated yesterday, with a villager being shot dead in Songkhla in the afternoon and two Army paramilitary rangers being killed in an ambush in Pattani in the evening.

Meanwhile, the implementation of various projects is entering a new phase, as a vast area of abandoned farmland is being revitalised to boost harvest output and seminars were being held in 26 large communities to narrow the cultural gap and hear what the residents have to say, he added.

So far, 318 suspects have reported under the Army’s pardon scheme, and of them 171 were wanted on criminal and security warrants, the colonel said.

Thanathip went on to say that 12 journalists from seven Muslim countries visited the deep South last month as part of a project aimed at giving the international community, especially the global Islamic community, a better understanding of the situation. Victims of violence are also being compensated and cases that were previously delayed are being sped up, he added.

In Songkhla’s Thepha district, former insurgent Samsudi Lahte, 62, was killed in a drive-by shooting outside a mosque. Police are investigating to see if the murder had anything to do with the victim being a former Patani United Liberation Organisation member. Later in Pattani’s Yaring district, a team of rangers was ambushed while escorting teachers, with two of them shot dead in a brief gunfight with insurgents.


White masks to rally again on July 14
The Nation / Phuket Gazette
PHUKET: Just three days after saying that it would indefinitely suspend its rallies in Bangkok, the V-For-Thailand white-mask group announced on Thursday that it was holding a demonstration on July 14.

On Tuesday, the group said it would suspend its activities indefinitely for fear that somebody might step in to take over as leader and interfere with its principle of working without one.

Then, three days later, the administrator of the V-For-Thailand Facebook page posted a message saying the group would hold a rally on Sunday July 14 in Lumpini Park because it did not want to cause traffic jams.

The white-mask group had previously been holding small rallies at CentralWorld every Sunday, prompting an objection from the management.

Even though a message on the V-For-Thailand Facebook page said the CentralWorld rallies would be suspended indefinitely, some fans posted messages saying they would gather at the venue this Sunday regardless.

Yesterday, the administrator of the Facebook page posted a message saying the group was nobody’s tool.

Meanwhile, Chaiwat Sinsuwong, a leader of the Thai Patriotic Group, denied trying to steal the limelight from the group yesterday.

“The routine pattern of news will make audiences feel that these cases are just what happens every day and not issues of real, social importance,” said Wassana Kaonopparat, the centre’s director.

She said news reports on human trafficking tended only to emphasise who did what and where, with few details of real relevance.

“In fact, the media should also give information on the relevant laws involved and the channels through which members of the general public can offer to help victims of human trafficking,” Wassana said.

She emphasised that such information would enable people to play a role in preventing trafficking.

Wassana was speaking around the same time as the Social Development and Human Security Ministry was holding a seminar, “With Media Support, Human Trafficking Will End”, in Ranong. About 100 reporters attended the event.

Preecha Sornwisutra, the ministry’s inspector-general, who presided over the seminar, said it was high time for the press to get involved in helping to stop trafficking.

“The media can make the general public more aware of the seriousness of human trafficking.”

He added that the government was committed to fighting the scourge of human trafficking, which for many consecutive years had kept Thailand on the US Tier 2 Watch List.

“As Rayong experiences greater economic growth, there are more and more human traffickers portraying themselves as honest recruitment agents, but in fact what they are doing is luring young girls and women into the flesh trade,” she said.

Some of the victims, especially children, are forced into slave labour and begging gangs, she added.

Deputy Ranong Governor Wiroj Saengsiwarit said that with the ease of modern travel, people from Myanmar and other parts of the region could easily enter Thailand with the hope of finding better jobs.

“But sometimes, they are deceived and forced into activities they do not want to get involved in,” he said.

The assets comprise several luxury cars, including a Rolls Royce and a Ferrari – and a large amount of cash stashed in 41 separate bank accounts.

ONB director Noppharat Benjawatthananant warned that Luang Pu Nenkham would be considered guilty, if he failed to return to Thailand by the end of the month.

Despite taking a vow of celibacy, Luang Pu Nenkham is also alleged to have had as many as seven lovers and to have fathered a number of children with them.

In addition, news reports have alleged that up to Bt200 million in donations has been uncovered in bank accounts belonging to his charity.

Luang Pu Nenkham, whose real name is Weeraphol Sukphol, was scheduled to return to Thailand on June 20, after the ONB approved his request to go on a month-long trip overseas.

Noppharat reiterated that under ONB regulations, any money donated to monks who have already been ordained must be spent on policies declared to the general public. He added that it was forbidden for monks to own any property other than