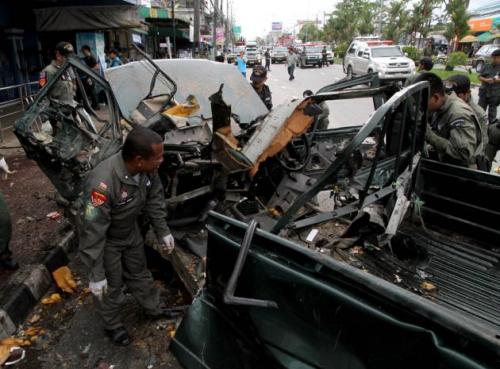 
Narathiwat rocked by two blasts
The Nation / Phuket Gazette
PHUKET: Two vehicle bombs in a span of five hours yesterday rocked Narathiwat’s Muang district less than 24 hours after the signing of an agreement in Malaysia between Thailand’s security authorities and four people purportedly representing insurgent groups in the South of Thailand.

The two attacks – the first at around 6am and the next at around noon – wounded six people and caused heavy property damage.

They were deemed by the media and the public as an act of defiance by insurgents opposed to the peace process.

The attacks were carried out for the first time in recent months within a safety perimeter dubbed the green zones.

The media and the public also questioned whether talks on the same day between Prime Minister Yingluck Shinawatra and her Malaysian counterpart Najib Razak were merely a public relations stunt for political gains by both sides as Malaysia is heading for general elections while the Yingluck government has been heavily criticised for its failure to contain the situation in the South.

Based on defence and intelligence sources, attacks were recently carried out independently by the local leaders of insurgents without or with minimal supervision or orders from the core insurgency leadership.

The vehicle-bomb attacks in Narathiwat could be seen as an attack by local insurgent cells aimed at showing that the talks and agreements reached in Malaysia mean nothing to the separatist cause.

The first bomb went off at around 5am. About 5kg of explosives were hidden in a motorcycle parked near the main market in Muang municipality. Six people were injured and one vehicle and six motorcycles were damaged. The grey Honda Dream motorcycle that carried the explosives was reportedly stolen on December 1 last year.

Military ordnance personnel said later that the bomb was detonated by a digital wristwatch instead of a mobile phone that is regularly used, as this motorcycle was parked behind a military vehicle operating mobile phone signal-jamming.

Footage from security cameras near the scene later showed unclear images of the operation by the insurgents, because it was still dark at the time of the blast. The footage only showed three pedestrians walking past the scene at the time of explosion, police said.

The second bomb went off around noon, when 50kg of explosives packed in a green Isuzu pickup parked in front of the command post of the provincial police force blew up. There were no casualties but nearby shophouses and a car were damaged. The green Isuzu pickup was not on a five-car watch list and was different from two other vehicles about which authorities had issued a warning earlier.

Military ordnance personnel said later that the explosives were fully contained in a cooking-gas cylinder and only half of the material went off. It was detonated jointly by an alarm clock and a mobile phone. Security officials said this bomb attack was likely carried out by a group responsible for a bomb attack on February 23 near a convenience store located across the barracks of the 45th Ranger Paramilitary Regiment in Ra Ngae district.

Phumtham Wechayachai, manager of the Pheu Thai Party’s campaign, said: “Our key message in this election is change and ‘seamless management’ of the capital city in conjunction with the central government.

“Our candidate, Pol General Pongsapat Pongcharoen, will implement this strategy if we win the election. Some critics have said that if the Pheu Thai Party controls both the national and Bangkok governments, that will lead to a lack of checks and balances, but that’s not true. In fact, Bangkokians will benefit from more effective and efficient management of the capital city.

“We have four core policies. First is the safety and well-being of Bangkok people.

“Bangkok is a huge place of 1,500 square kilometres [with around 4 million voters out of the 5-million-plus residents who are registered]. There are inner-city business districts, middle-city and outlying areas.

“For example, we will link the city’s thousands of closed-circuit TV cameras with those of the private sector’s condominiums and business establishments to boost efficiency and effectiveness.

“Second is the linkages of mass-transit systems for easier commutes.

“Third is the environment. Fourth is the new web of business and economic opportunities that will boost income for residents. This includes the development of Bangkok’s Bang Sue train station as the grand central station for city mass transit, regional high-speed train routes and [Asean-China] cross-border high-speed train services.

“Khun Pongsapat will act as the top manager linking all local and central government agencies to implement these policies.

“In terms of the checks-and-balances mechanism, there is the City Council, in which elected representatives from the opposition Democrat Party are currently the majority. They could still do their work, since their terms have not expired yet.

“During this campaign, we have seen a warm welcome for our candidate from people of virtually all walks of life. We would like to see more people vote this time than in the last election four years ago when the turnout was around 52 per cent.

“It’s hard to predict how many votes we will get this time [compared with around 600,000 in the last election], but I believe we will get more, as people want change. We’ve urged the people to give us more than a million votes this time so that the results will be unanimous.”

Ong-art Klampaiboon, the campaign manager for the Democrat Party’s candidate, incumbent governor MR Sukhumbhand Paribatra, said: “Most opinion polls have suggested that we are trailing the other candidate by a margin of 1-2 percentage points to as much as 20 points.

“I’ve been through many local and national elections. There are three groups of voters. The first are our loyal supporters. The second group are those who may vote for our candidate, and the third are those who will not.

“For those who remain undecided, we told them what we have done over the past four years. For example, Sanam Luang has changed for the better and many city residents are happy to see there are no homeless people there. It’s now a city landmark, and people like to take their families there for recreation.

“Another example is the city’s green area, which has increased by 5,000 rai over the past four years, or the fact that Bangkok has been voted the world’s top tourist destination for the past three consecutive years. We’re better than Paris or London in the eyes of international tourists.

“Our candidate has been through very tough situations such as the multi-colour political unrest and the 2011 massive floods around Bangkok.

“For me, the ‘seamless management’ slogan used by our rival is just rhetoric, since we wouldn’t need the local-governor election if we wanted such seamless management between the national and local governments.

“All big capital cities have their own local elections. In fact, we don’t think there are any problems in runn