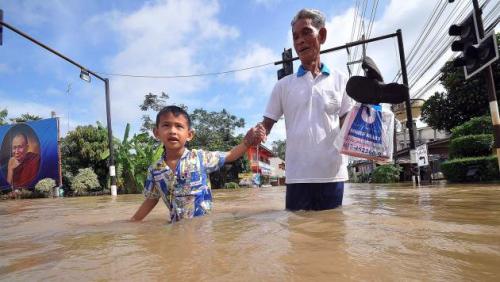 
No major flooding in capital: BMA
The Nation / Phuket Gazette
PHUKET: Despite heavy downpours over the past two weeks, the Bangkok Metropolitan Administration (BMA) still believes the capital should escape floods this rainy season.

“Run-offs and rain will not coincide with high tides this year,” an official at the BMA Flood Prevention Centre said in a recent interview.

According to the centre, rainfall and run-offs are expected to peak in Bangkok late this month, while the high-tide period will begin next month.

“Hence, the current water situation is far less worrying than in 2011,” the official said.

Two years ago, Bangkok was among the many provinces hit hard by floods.

The BMA says that though its flood-prevention systems remain pretty much the same, they have been improved to some extent. For instance, flood barriers along the Chao Phraya River are now up to 3 metres high, when two years ago they stood at 2.5m at the most.

The BMA has also said that it should be able to clear road surfaces within an hour if the rainfall does not exceed 60 millimetres per hour. The city administration remains confident even though nearby provinces such as Ayutthaya, Lop Buri and Prachin Buri are already inundated.

More than 8,000 families in Prachin Buri have been affected by flooding. In addition, up to 24 schools have sustained water damage, as have 23 roads and a bridge. One death has been reported so far.

Meanwhile, the Meteorological Department yesterday forecast higher rainfall in the lower Northeast region during the weekend.

“A strong high-pressure cell will reach the region during this period,” it said.

Locals have been warned to be careful of downpour-related risks in Nakhon Ratchasima, Buri Ram, Surin, Si Sa Ket and Ubon Ratchathani.

Many provinces in the Northeast have been struggling lately. For instance, more than 353,300 people in Si Sa Ket have been adversely affected.

Pravej Nonthasee, acting chief of the Si Sa Ket Provincial Prison, said the correctional facility was surrounded by a metre of water. “We have had to form a 1.5-metre high sandbag wall around our facility, and as a precaution, we have also moved inmates from the ground floor to higher floors,” he said.

In Ubon Ratchathani, the run-off from Det Udom district damaged a key bridge connecting the Na Yia district with the heart of the province. Officials have now closed the bridge to traffic.

According to the Disaster Prevention and Mitigation Department, floods have ravaged 27 provinces this month, though the situation in Kanchanaburi and Chumphon has already improved.

At about 2am yesterday, a bit of the road surface on Charoenkrung Road in front of the Leng Noei Yi Temple (Wat Mangkorn Kammalawat) subsided, leaving a crater at the construction site of the MRT Blue Line’s extension route.

“The crater was about 25 centimetres deep initially, but I ordered workers to dig deeper to find out what caused the collapse,” construction supervisor Kamol Mahaphon said.

After digging further, his team found that huge water leaks had weakened the area.

“Hence, we have contacted relevant officials, including the Metropolitan Waterworks Authority,” Kamol said.

Meanwhile, Chadchart said the MRT tunnel, which is still being constructed, is about 25 metres deep and remains intact. “The tunnel has not been damaged in any way,” he reiterated.

Pisitchanon Niwattanakul, a member of the Leng Noei Yi Temple’s board, said the road-surface collapse did not affect the monastery.

“The temple is alright with the construction of the MRT extension because it is beneficial to the public,” he said.


Mae Wong Dam report scrapped
The Nation / Phuket Gazette
PHUKET: The Government has scrapped the latest version of the environmental report for the controversial Mae Wong Dam in Nakhon Sawan, saying it will launch a brand new study with a focus on flood prevention.

Deputy Prime Minister Plodprasop Suraswadi explained that the environmental and health impact assessment (EHIA) conducted by the Royal Irrigation Department (RID) could not be used, as it focused on resolving irrigation problems rather than flood prevention. Hence, he said, he would get the Office of National Water and Flood Management Policy to launch a new study, which should begin once the public hearing on the Bt350-billion water- and flood-management scheme is completed by December and a deal is signed with the contractor by February.

The Mae Wong Dam project is part of the government’s water- and flood-management plan.

It was first proposed in 1984 by the RID as part of a plan to study irrigation development in the Sakae Krang watershed – a tributary of the Chao Phraya River. The Japan International Cooperation Agency backed this proposal.

The RID has been submitting its environmental impact assessment (EIA) report to a panel of experts and the National Environmental Board (NEB) since 1994, but the report continues getting rejected due to incomplete information.

As per the most recent EHIA, the dam would cover 12,900 rai of the Sob Kok mountain, which straddles Nakhon Sawan’s Mae Wong district and Kamphaeng Phet’s Khanu Woralaksaburi district. Also, some 12,300 rai of this area falls in Mae Wong National Park. According to the report, more than 12,900 rai of forest, consisting of mixed deciduous, dry dipterocarp and bamboo species, would have to be cleared. The dam construction will also affect the head watershed and the habitat of more than 400 wildlife species, including tigers.

However, the dam is expected to retain 258 million cubic metres of water and help irrigate more than 291,900 rai of arable land in Nakhon Sawan, Kampaeng Phet and Uthai Thani.

While he was director-general of the Royal Forest Department in 1999, Plodprasop fought against the Mae Wong Dam project, saying it would destroy the forest areas. He changed his mind this year, however, saying it would resolve flood problems.

Meanwhile, RID director-general Lertviroj Kowattana said his department would not go ahead with getting the NEB’s panel of experts to approve the EHIA.

“We will not go ahead with the plan if Plodprasop wants to stop it,” he said.

Citing the 1992 Enhancement and Conservation of National Environmental Quality Act, the secretary-general of the Office of Natural Resources and Environmental Policy and Planning, Santi Boonprakub – who chairs the panel deliberating on the EHIA – said his panel would have to continue deliberating and providing recommendations on the report. Once this is done, the report will be submitted to the Independent Commission on Environment and Health for more suggestions before it is sent to the Cabinet, which has the power to withdraw the EHIA.