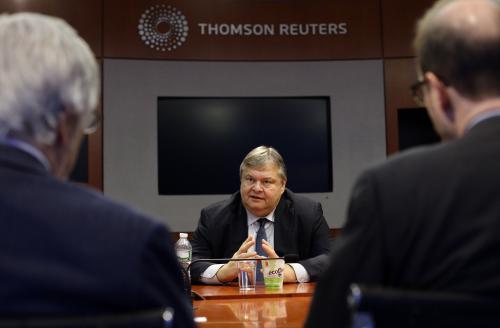 Officials in the southern Arequipa region said they were told that people died after collapses in make-shift copper mines, which operate largely outside of the law. A magnitude 7 quake, capable of widespread, heavy damage, struck near Peru’s southern coast a few minutes before midday on Wednesday.

However, they said they could not confirm the deaths.

“We have heard people have died near the mines Huarato and La Verde, which are small informal copper mines,” Juan Flores, an official with the Acari district government, told Reuters.

Sources with the regional government of Arequipa told Reuters there were reports that three people had died at the mines.

Large-scale mining operations in the region – at Southern Copper’s Toquepala mine, Freeport-McMoRan’s Cerro Verde mine, and Shougang Hierro Peru’s iron-ore mine – carried on as usual after the quake, union leaders and a company representative told Reuters.

The quake struck 29 miles (46 kilometres) deep in the Pacific Ocean, 29 miles south of the district of Acari in the southern Arequipa region, the U.S. Geological Survey said.

Peruvian President Ollanta Humala said on RPP radio that around six people had been injured because of the earthquake, and that landslides and electrical blackouts had occurred.

A local resident of Acari also told RPP radio that a landslide blocked a highway.

The quake shook buildings in the capital of Lima 313 miles (504 kms) away.

Peruvian authorities did not issue any tsunami alerts.

Onemi, Chile’s national emergency service, said the quake was also felt in northern Chile, but no damage was reported.


Greece does not need third bailout, seeks debt ‘reprofiling’
Reuters / Phuket Gazette
PHUKET: Greece does not require a third bailout and can cover its needs without further burdening its current backers, by improving the terms of its debt and possibly returning to the bond market next year, the country’s deputy prime minister said on Wednesday.

Evangelos Venizelos, who is also foreign minister in a coalition government, is determined not to impose losses on Greece’s European Union partners and the International Monetary Fund, which have pulled the troubled country from the brink of bankruptcy with about 240 billion euros ($325 billion) so far.

“We understand very, very well how difficult it is for every government to accept debt relief. … Our demand is not debt relief. It is additional reprofiling without problem, without additional burden for our institutional partners,” Venizelos said in an interview with top editors at Reuters in New York.

His comments came days after elections in Germany, whose support to Greece came in exchange for waves of austerity measures that have created political and social turmoil across the Mediterranean nation.

The Greek debt crisis shook the euro zone and global financial markets and plunged the country into a recession, now in its sixth year. Unemployment hovers near 28 percent nationally and at about 60 percent for young adults.

“We are talking about the potential for a lost generation here,” Venizelos said, adding that the prospect of a social explosion if Greek citizens are forced to endure more fiscal austerity was the biggest risk for the country.

He said the rise of the far-right Golden Dawn party, which last year entered the 300-seat parliament for the first time, and won 18 seats in June elections, was a product of the crisis.

Hopes to return to markets

Since the sovereign debt crisis of 2009, Greece has been shut out of international capital markets, resorting only to short-term borrowings, and has relied on two bailouts and a major writedown of Greek debt held by private investors.

Despite punishing fiscal measures and cash injections, it is expected to need an additional 10 billion to 12 billion euros in the next two years. The euro zone is likely to decide on a third bailout for Greece in November after international inspectors finish an assessment of its reforms.

Venizelos, a constitutional law professor and former finance minister who negotiated the debt writedown, said Greece was not looking for any more handouts but could cover its needs by returning to the bond market as early as next year and by renegotiating the interest and maturity of existing debt.

“Our point is not to transform the adjustment program as a more loose program, but to implement through a clever manner the existing program,” he said.

Venizelos said Greece’s 330 billion euros of public debt was modest when compared with the multi-trillions of euros held by Germany, Italy and France, but that precludes the size of the overall economy, which is now one of the smallest in the EU.

Greeks often blame Germany for the tough austerity measures imposed on the country as a condition for the two prior bailouts, which have led to the economy shrinking by almost a quarter since 2008.

German Chancellor Angela Merkel’s landslide victory came with the rise of a more euroskeptic political movement that is hostile to euro zone bailouts.

But Venizelos said now that the elections were out of the way in Germany, there was the opportunity to talk strategically about Europe’s future, and what he deemed the “re-evaluation and the reassessment of our common European destiny.”

President Uhuru Kenyatta said on Tuesday that troops had defeated the al Qaeda-linked al Shabaab group after a four-day siege at the shopping centre popular with prosperous Kenyans and foreigners. He declared three days of mourning.

The attack has highlighted the reach of al Shabaab and the capabilities of its crack unit which claimed responsibility for the bloodshed in the Westgate mall, confirming international fears that Somalia would remain a recruiting and training ground for militant Islam as long as it remained in turmoil.

The militants stormed the mall, known for its Western shops selling iPads and Nike shoes, in a hail of g