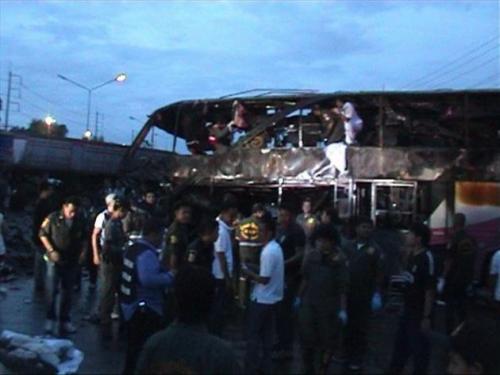 PHUKET: Anti-government groups are firming up plans for street rallies ahead of the parliamentary deliberation on August 7 of an amnesty bill proposed by a group of MPs from the ruling Pheu Thai Party.

The protests will be scheduled on different days, but it is not clear, according to the latest remarks by their leaders, whether they will be staged at the same venue. Prime Minister Yingluck Shinawatra is due to leave for an official trip to Africa today and return on August 3, two days after Parliament convenes.

Opposition Leader Abhisit Vejjajiva called on the prime minister and her government to avoid a return to civil strife, referring to its rush to pass an amnesty law. The government should devote its energy to addressing the plight of the common people, he said.

“It all depends on the government. People will take to the streets within seven days. The prime minister can decide not to bring the country back to a conflict, and instead focus on tackling the problem about the cost of living. It depends on whether she will do that,” said Abhisit, who is also the Democrat Party leader.

The Democrats are arranging for their “Reveal the Truth” show against an amnesty bill to take place some time between August 3 and 6 at Bangkok venues to be selected.

Critics and opposition politicians have alleged that there have been attempts to include fugitive former prime minister Thaksin Shinawatra among the targets of an amnesty bill.

The People’s Army to Overthrow the Thaksin Regime, formerly known as Pitak Siam, called a meeting of group leaders in the afternoon at the Royal Turf Club. The group would conduct a peaceful rally but would not allow provincial authorities and police to block them from gathering in Bangkok. It would consider legal action if it is prevented.

Tul Sitthisomwong, a leader of the multi-coloured-shirts movement, said his group would rally outside Parliament between August 5 and 8 to protest against the amnesty bill.

Suriyasai Katasila, coordinator of the Green Politics Group, said he suspected the amnesty bill would be drafted in a way to benefit Thaksin and the red-shirt leaders facing legal problems in connection with the 2010 unrest.

The People’s Alliance for Democracy will call a rally if it finds that the amnesty law proposed by Pheu Thai MP Worachai Hema is intended to help Thaksin escape legal problems, PAD spokesman Parnthep Puapongphan said.

Vasit Dejkunchorn, a retired former deputy police chief and head of Thai Spring, said his group would demonstrate against the amnesty bill outside Parliament House.

PHUKET: Operators of private transport businesses in Thailand focus mostly on profits rather than passenger safety, while the assemblers of specially modified buses, particularly the widely used double-deckers, tend to use substandard materials and shun safety features to keep costs down, an expert on road safety and transport engineering said.

In the case of double-decker buses, the windows on the top deck have reinforced glass, which is difficult to break, making it tough for passengers to escape in case of an emergency, Assistant Professor Somprasong Sattayamallee said.

Plus, the additional weight of the reinforced glass on the top deck results in the bus not being properly balanced, he added.

Somprasong, quoting a bus assembler who did not want to be named, said most modified eight-wheel double-decker buses in Thailand were higher than 4.5 metres. Also, these buses seat between 50 and 55 passengers, when the standard is no more than 40, he said.

The assembly technician went on to say that up to 70 of the buses he had modified had a standard chassis with a normal 2.5-metre axle despite the additional height. To comply with safety standards given the extra height, the axle should be wider than 2.5 metres. However, wider chassis are only made overseas, which would make the job of modifying the bus more expensive.

“The tour-bus operators will not hire you if you use an expensive foreign-made chassis,” he explained.

The safety of specially modified double-decked buses has raised concerns after several road accidents, especially the most recent one in Saraburi’s Kaeng Khoi district in which 19 people were burned to death and 22 others injured.

Transport Minister Chadchart Sittipunt, meanwhile, is encouraging private operators to install Global Positioning System devices on their buses as this would allow for efficient management of public transport and make it easier to track the vehicle in case of emergencies.

Of the 800 buses operating under the government concessionaire Trans-port Co, 731 have had GPS tracking devices installed. The ministry is aiming to require all new buses to be equipped with the system.

PHUKET: Insurgents and the authorities are blaming each other for the death of two female government teachers who lost their lives in a roadside bomb attack in Narathiwat on Wednesday.

Military spokesman Colonel Pramote Promin said yesterday that the results of the autopsies performed on the two victims indicated they died from shrapnel wounds to the head after the blast. The bomb is thought to have been intended for a military vehicle that was also in the area.

After the explosion, the two teachers lost control of their vehicle, which plunged into a canal. Autopsy concluded that Nusyahan A-wae and Nayeeha Yeera were killed by shrapnel from the homemade bomb – made from metal rods cut into pieces.

A government spokesman also refuted rumours that the two Muslim women died in crossfire between insurgents and the police.

He said that insurgent sympathisers in Narathiwat, who want locals to believe police were responsible, spread the rumours.

Insurgents and security officials alike have been cautious about reporting violent clashes during Ramadan, with each side blaming the other during the ceasefire. Ramadan ends on August 8 and the ceasefire between insurgents and government forces is expected to end a few days later.

PHUKET: Thirteen northern provinces were warned on Thursday of heavy rains and possible floods and landslides.

Chatchai Phromlert, director general of the Department of Disaster Prevention and Mitigation (DDPM),