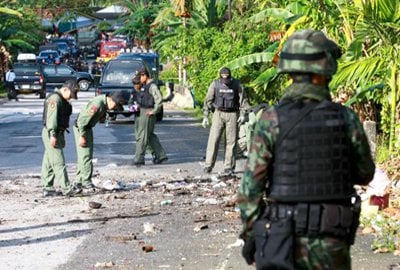 PHUKET (The Nation): According to a survey conducted by The Nation, only budget airline Nok Air was in operation at the airport. Passengers said they found the service convenient.

Security guards said there had been no disruption since the early-morning opening. Passenger traffic flowed well and the air-conditioners kept the building comfortable.

Patee Sarasin, chief executive officer of Nok Air, said on Monday that the airline was ready to resume 80 flights at Don Mueang Airport as usual. Reopening of only two routes was to be delayed. On the same day, Prime Minister Yingluck Shinawatra presided over the airport’s reopening.

Yesterday, the first flight took off at 6am, headed to Udon Thani, and the last one was at 8pm, traveling to Chiang Mai.

A man heading for Ubon Ratchathani said his flight was to take off at 6pm, but he came early because he was not sure how efficient the service would be on the first day of the reopening.

Two lecturers who hold PhDs and teach environmental health at Rajabhat Ubon Ratchathani University were somewhat worried about the airport’s cleanliness, especially the air-conditioners, after the flood. They said some bacteria might be lurking on the floor or somewhere if disinfecting had been inadequate. Since bacteria are invisible, it can be difficult to make sure they have been eradicated.

The airport should display signs inside telling passengers that the building is kept clean according to high standards to make sure that it will not harm passengers’ health, they said.

A man who declined to be named was waiting for the flight to Nan. His Nok Air flight was scheduled for 3.40pm, but was delayed to 4.20pm. Nok Air staff said the plane itself was late, and the delay was not due to the smog situation in the northern region. Despite the delay, overall this passenger felt OK about the airport facilities on the first day.

Nok Air staff said they had spent a week preparing to provide service for all passengers. Twelve check-in counters were opened, previously only seven or eight counters were in operation.

The two lecturers, who are regular Nok Air passengers, said Don Mueang was more convenient than Suvarnabhumi Airport. Access to downtown was easier, facilities for passengers were good, and it was not congested. At Suvarnabhumi, Nok Air had too few check-in counters and the number of shuttle buses was limited, causing them inconvenience.

“Nok Air’s operation at Suvarnabhumi looked like a son of the second wife,’ one of them said.

When asked whether Bangkok should have two airports or just one, most people said the separate airport was a good idea. They felt it was more convenient and easier to get transport to downtown.

One soldier killed, another injured in Yala bomb attack
PHUKET (The Nation): Police said the blast occurred in Kuwa village, Tambon Huaykrathing in Yala’s Krong Penang district at 6.40am yesterday.

Sgt Preecha Kongphakdee, 52, was struck by shrapnel on the head and body and was pronounced dead at Yala Hospital.

Pvt 1st Class Thongchai Boonchuay, 23, was hit by shrapnel in his left eye and body, leaving him severely injured. Doctors said his condition is stable and he is now out of danger.

Police said insurgents planted a home-made bomb at a roadside garbage dump site and detonated it a when a unit of nine soldiers, led by Preecha, arrived at the scene. The troops were patrolling the road on foot to provide protection for teachers as they traveled to school in the morning.

Police said the area was the zone of insurgent leader Ismael Rayalong.

Bomb disposal officers said the bomb was apparently made of 5kgs of explosives contained in a metal box. The bomb was detonated with a walkie-talkie radio.

A police source said about 100 walkie-talkie radio sets have recently been shipped by an insurgent supporter to three southern border provinces.

PHUKET (The Nation): Being a sex worker these days isn’t what it used to be, at least for those whose rights are backed up by the Empower Foundation. Much has improved – no more pimps or mamasans, and fewer punches thrown their way. Being “rescued”, though, causes them all sorts of problems.

Most people remain unaware of the dramatic new context in the flesh trade, Empower director Chantawipa Apisuk said at the recent release of a report, “Hit & Run: Sex Workers’ Research on Anti-trafficking in Thailand”.

“We have now reached a point in history where there are more women in the Thai sex industry being abused by anti-trafficking practices than there are women exploited by traffickers,” she said.

The government and the agencies that abet its efforts to “help” prostitutes have, in many ways, gone too far in enforcing the Prevention and Suppression of Human Trafficking Act.

The modern sex worker has work tools apart from makeup and condoms, said Chantawipa, who founded Empower in 1985 to safeguard their rights. They have cell phones and the Internet. Rather than greedy pimps, their support network is centered on a trusted tuk-tuk driver or the local motorcycle-taxi guy who takes them around and protects them.

These people have designated workplaces – restaurants, massage parlors, go-go bars, beer bars or karaoke clubs. Their work might also entail dancing for or drinking beer with the customers.

More than 20,000 sex workers make use of Empower’s contact points in 11 provinces in the North, Northeast and Central region, including several on the Burmese border.

Empower has seen the industry develop continuously through three decades and 10 governments. Sex work is now widely regarded as a quasi-legitimate profession, with its own form of employers and self-employed workers.

Inevitably, though, prostitution remains a crime in the eyes of many, and those plying the trade are treated accordingly.

But the kindlier view, that they are victims of human trafficking, isn’t a great deal of help either, Chantawipa said. Legislation aimed at stopping the trafficking of people has had a serious adverse effect.

The “Hit & Run” report is an effort to assess the state of the profession. More than 200 sex workers helped the foundation conduct a survey over the course of 12 months, in bars, restaurants and brothels across the county and even into Burma and Laos.

“We trained them in legal rights,” Chantawipa said, although some were already university graduates and several even had law degrees. “We call them our ‘high-heeled human-rights defenders’.”

It’s a play on the term “barefoot lawyer” – a solicitor who cares about justice rather than fees – explains Liz Hilton. She’s worked with the foundation for nearly 20 years and helped coordinated the project and the associated Rapid Action Training for Sex Workers.

The survey determined that more than 50,000 sex workers have been involved with Empower since it started, including migrants mainly from Laos, Burma, China and Cambodia.

Migration, it was noted, is part of the “culture” of sex work, and the brokers involved in transpor