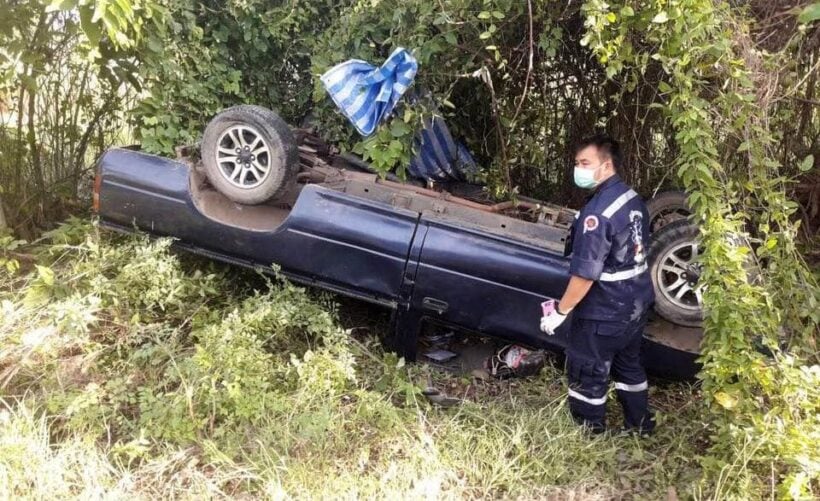 A pick-up has flipped, throwing workers off the back tray, killing them when they crashed into another pick-up in Phichit this morning, in central Thailand.

Three people were killed and four others injured when the pick-up smashed into another pick-up truck transporting construction workers.

The accident happened at 8.30am on highway No 115 linking Sam Ngam and Muang district in Phichit.

Both pickups flipped and crashed off the road after impact in Ban Klong None village in Tambon Khachane of Muang district.

The three dead workers were identified as 17 year old Pakorn Saisiri, 50 year old Boonluan Sarasingam and 49 year old Sompop Jirapong. The three were thrown from the back of the pick-up. Police say a woman, a man and two children from the same pick-up were also injured.

The pickup, driven by 32 year old Noppadol Pho, was transporting construction workers and their families from Muang district to a construction site in Phichit’s Pho Thap Chang district when the accident happened.

Police said Noppadol’s pickup was hit by another pickup driven by 23 year old Supipat Pe-ihn from Samut Prakan’s Phra Pradaeng district, who, police allege, dozed off behind the wheel.

Supipat has been arrested and charged with reckless driving causing deaths and injuries.