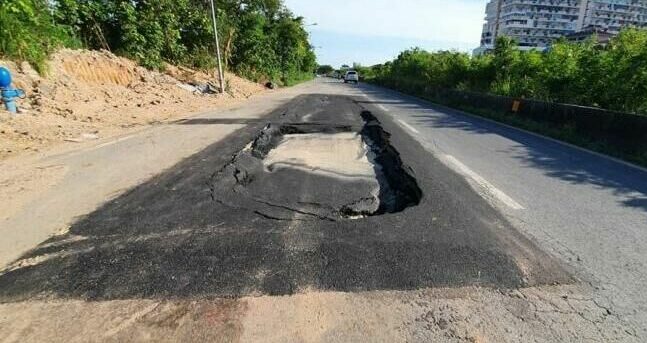 I sustained a minor injury while my boyfriend suffered serious injuries.

People in the Pattaya area are reporting that they have suffered injuries from sinkholes in the road. Others are complaining about the faulty infrastructure on social media.

The sinkholes are due to recent heavy flooding in the area. Also, work done by a public works company, allege locals.

26 year old Weerawan Chaisorn told Thai media that Saturday night she was on a motorbike with her boyfriend when they plunged into a sizeable sinkhole. She says there was no warning the flat road was about to transition into being one full of holes. Further, Weerawan says the signs were only put up after their accident.

“I sustained a minor injury while my boyfriend suffered serious injuries. He is still being treated at Bangkok Pattaya Hospital. No one has contacted us for compensation or responsibility for the accident despite complaints to the city”.

Nearby locals say the Pattaya Waterworks has renovated the water system which is partially to blame for the sinkholes. They say the road was fixed after they complained about it, but the problems arose (or asank) once again.

The locals want others to know of the dangers of driving in their area. This, in turn, has led to heated chatter on social media about the road. Many have chimed in with similar experiences in the area.

As of this writing, there has been no official response to the situation.