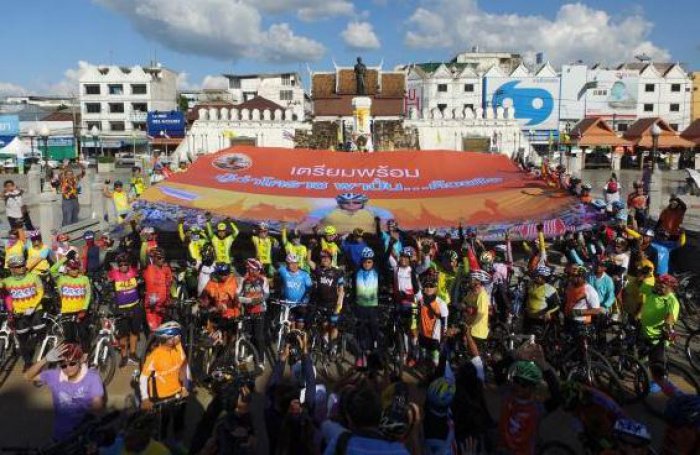 BANGKOK: More than 600,000 people throughout Thailand and overseas have registered for the upcoming Bike for Dad event – the historic cycling parade to mark the 88th birthday of HM King Bhumibol Adulyadej.

Krisda Boonraj, permanent secretary of the Interior Ministry, said about 100,000 of the registered participants were from Bangkok, with the majority of the rest being from the provinces.

“A total of 9,805 participants registered themselves to join the events overseas,” Mr Krisda added.

The Bike for Dad event will be held on December 11 in various parts of Thailand as well as many other countries. Although that Friday is not a national holiday, the government plans to seek cooperation from organizations involved to allow their members to join the event, as it will involve a large parade of bicycles and will affect traffic.

“Some of the schools have already expressed an intention to close down that Friday,” Assistant National Police Commissioner Lt Gen Anan Srihiran said yesterday.

He said the authorities involved would decide whether to ask companies in certain areas to provide the same cooperation.

The mass bicycle ride is in response to HRH Crown Prince Maha Vajiralongkorn’s wish to encourage Thai people from all walks of life to express their gratitude and loyalty to HM The King on the occasion of his birthday celebrations.

The event is also meant to show the unity of the Thai people.

The Crown Prince will lead the Bike for Dad event in Bangkok.

Dr Kamjorn Tatiyakavee, permanent secretary of the Education Ministry, said his ministry was in charge of preparing commemorative books for the event.

“The books will compile the history and royal works of the Crown Prince and also present pictures of people participating in the Bike for Dad event,” Dr Kamjorn disclosed.

He added that an e-book version would be available for people to download as well.

“We should be ready to hand out the books in February next year,” said Dr Kamjorn.

Meanwhile, Prime Minister Gen Prayut Chan-o-cha instructed all relevant authorities to ensure the safety of cyclists taking part in the event and to facilitate the traffic on that day.

Deputy Police Spokesman Pol Colonel Krissana Pattancharoen disclosed that more than 10,000 police officers would be deployed for the Bike for Dad event.