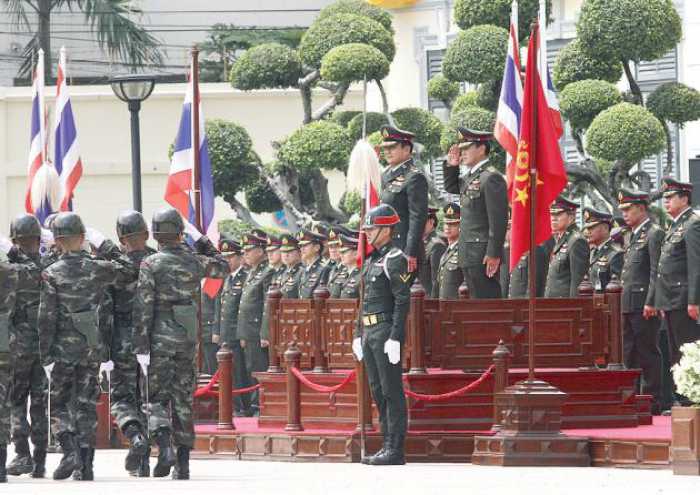 “There won’t be [a coup], be it by those [in power] now or in the future. The commanders have a common understanding and everyone is moving in the same direction,” he said.

Udomdej made the remark in reply to reporters’ questions following the hand-over ceremony at Army headquarters in Bangkok yesterday.

The new commander, who assumes the position today, said the Army would continue to serve as a main base for maintaining peace and order and would defend the monarchy institution and try to end the conflict in the deep South.

“I am ready to continue the task and deal with threats of all forms that are becoming more complex and broad as well as preparing [the Army] into becoming a strong Army for Asean,” said Udomdej, adding that winning the trust of the public would also be an objective, along with fostering national unity and stability.

On the restive three southernmost provinces, the new Army chief said the struggle to maintain peace in the area was already a decade old. The outgoing Army chief and Prime Minister Prayut had assigned him with the task of restoring peace – or at least reducing the level of violence – in the area.

“We used to try to win [the hearts] of all villages but from now on we will make people in the three-border provinces feel they’re not fighting with anyone. We shall make peace in the villages and when the villages are peaceful, the districts and provinces shall become peaceful as well,” Udomdej said.

“We will try to make understanding through talking with all groups. This is what I will do more in parallel [with other approaches],” he said, adding that he was confident such a strategy would work if all parties cooperate. “Come and talk with us if you have something to say or something that you wish to do. We shall support things that are right and in accordance with the constitution.”

In regard to maintaining peace and order nationwide, the new Army chief said the National Council for Peace and Order (NCPO) would continue to exist and play its role, as well as continuing to support the government.

Prayut, meanwhile, said he was confident the new Army chief would be able to carry out the tasks, including modernising of the Army.

Siriraj comes up with an antibody for Ebola