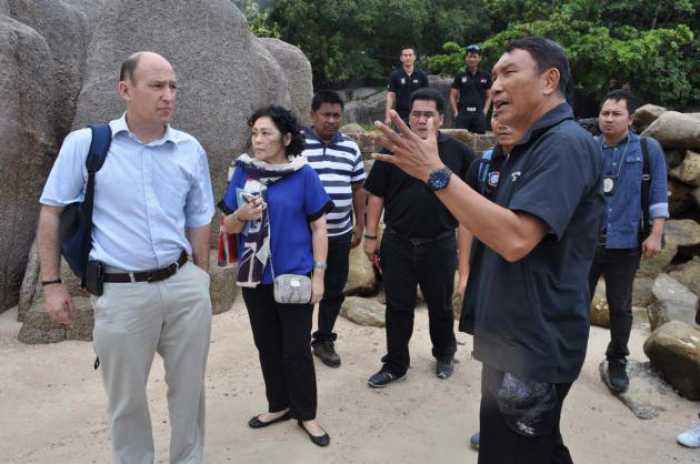 PHUKET: Police last night ruled out three Myanmar workers being involved in the murder of two British tourists, as the government appeared to call into question the “behaviour” of the victims themselves.

The bodies of Hannah Witheridge and David Miller, both 24, arrived in Bangkok late yesterday for forensic examination.

The victims were found naked and beaten to death early on Monday near a beachside bungalow on Koh Tao, a popular diving spot near Koh Pha-ngan. A bloodied hoe was discovered 35 metres from the murder scene.

“They were very far from the scene … it was probably not them,” he said, adding that DNA samples had been collected from the men. However, he did not give details of any further leads as the manhunt on the small, normally tranquil island stretched into a second day without an arrest.

Police have also cleared a number of British tourists who travelled with the victims of being involved.

Yesterday, Prime Minister General Prayuth Chan-ocha said “We have to look into the behaviour of the other party too, because this kind of incident should not happen to anybody and it has affected our image,” he told reporters, adding the authorities were working “swiftly” to find the killers.

Koh Tao, home to stunning white sand beaches and azure waters, is popular with divers but is smaller and more laid-back than neighbouring Koh Phanganwhich draws hordes of backpackers to its hedonistic “full moon” party.

Later Prayuth said local people must tell “tourists when the safe times are to be outside, we have to help them understand”.

Police had earlier said the pair had been seen partying at a local bar just hours before they died.

Police sources said police had found a pair of blood-stained jeans and four iPhones – two of which had screens that were cracked – in a search of nine rooms occupied by six migrants yesterday.

The country is desperate to avoid further damage to the nation’s lucrative tourism industry, which has been battered in recent months after a prolonged political crisis ended in a coup.

The army swiftly blanketed the country with a curfew and strict martial law, frightening off visitors.

Britain says Thailand is the country where its citizens are second most likely to require consular assistance if they visit, behind the Philippines.

There were 389 deaths of British nationals in Thailand in the year to March 2013 – about one for every 2,400 British visitors or residentsalthough that figure includes natural causes.

But it is rare for tourists to be murdered in Thailand, although it is not uncommon for visitors to die accidentally.

Deputy national police chief Pol Gen Somyot Poompanmueng earlier said the suspect is seen in the footage walking around the scene of the murders, on Chor Por Ror beach.

Somyot said it was assumed that the killer or killers would be local residents or migrant workers, as they would know where to acquire the murder weapon – a hoe.

He said Prayuth Chan-ocha had phoned him to directly instruct him to identify and arrest those responsible as a matter of utmost urgency.

Prayuth spoke to reporters at Government House, acknowledging that the murders had affected Thailand and its public image in terms of tourism, and that he would ask the police to speed up the investigation.

Meanwhile, the regional Tourism Authority office tasked with affairs in Europe, Africa and the Middle East issued a statement to the press in the United Kingdom expressing sorrow over the double-murder and condemning the violence as unacceptable, while vowing to maintain efforts to identify and arrest the killers.