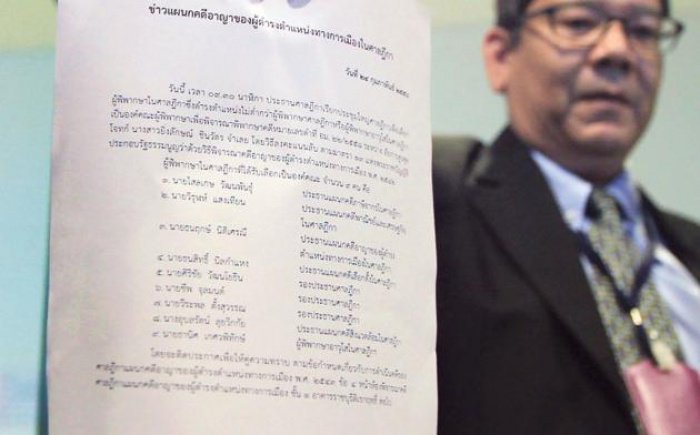 PHUKET: More than half of nine judges selected yesterday by 146 Supreme Court members to be on a panel to hear the rice scheme case against former prime minister Yingluck Shinawatra have been picked to rule on cases linked to the Thaksin camp.

Thanit Ketsawapitak, a senior judge, had voted to dissolve the Thai Rak Thai Party in May 2007, after the coup in September 2006 ousted the Thaksin government. The panel voted 9:0 to disband the party, but Judge Thanit was one of the minority opposing the then junta’s order to ban Thai Rak Thai executives for five years.

Judge Thanit was also a member of the judges’ panel that ruled to confiscate 46 billion baht of Mr Thaksin’s assets, for benefiting from corrupt dealings while he was prime minister.

Meanwhile, Ms Yingluck has yet to say if she will object to the judicial panel that has been selected, as both the plaintiff and the defendant have the right to file a petition if they object to the selection.

Ms Yingluck’s lawyer Norawit Lalang said a team of lawyers would meet soon to discuss if they want to file an objection to the appointment of the nine judges. If there is no objection, the panel will decide on March 19 whether it should accept the case.

The Office of the Attorney-General filed the indictment against Ms Yingluck on Thursday with the Supreme Court’s Division for Political Office Holders at the recommendation of the National Anti-Corruption Commission (NACC) to press malfeasance and negligence charges over her alleged failure to stop corruption and more than 500bn baht in losses in the rice subsidy scheme.

Of the nine judges, five are on the panel that will hear a case against former prime minister Somchai Wongsawat and three others for malfeasance filed by the NACC over the deadly crackdown on People’s Alliance for Democracy protesters in October 2008. The first hearing for that trial is set for May.

Weerapol Tangsuwan, who is also chief justice of the court, was selected to sit on a panel to hear a case filed by the state prosecutors against former PM Thaksin and 27 others for malfeasance, which is estimated to have cost the state up to 4.5bn baht in loans extended by state-run Krungthai Bank (KTB) to real-estate firm Krisada Mahanakorn Group.

The KTB trial began years ago but is still being heard, with witnesses and other defendants being summoned to give testimony. The case was suspended after Mr Thaksin fled the country, but has continued in relation to other defendants.

Supreme Court president Direk Ingkaninanda yesterday chaired the meeting of 146 judges – out of 173 in total who cast secret votes to select the judges’ panel for Ms Yingluck’s case.

Meanwhile, a Finance Ministry subcommittee’s auditing of the rice-pledging scheme for the period of 2004 to 2014, ending September 2014, found that a loss of 18bn baht had been incurred in May 2014 alone, bringing the total loss over 10 years to approximately 700bn baht.

Rungson Sriworasat, permanent secretary of the Finance Ministry, said yesterday that 536bn baht in losses were incurred under Ms Yingluck. There are currently some 17.5 million tonnes of rice in state inventories valued at 230bn baht, of which 2.9 million tonnes are of good quality, while the rest are substandard.