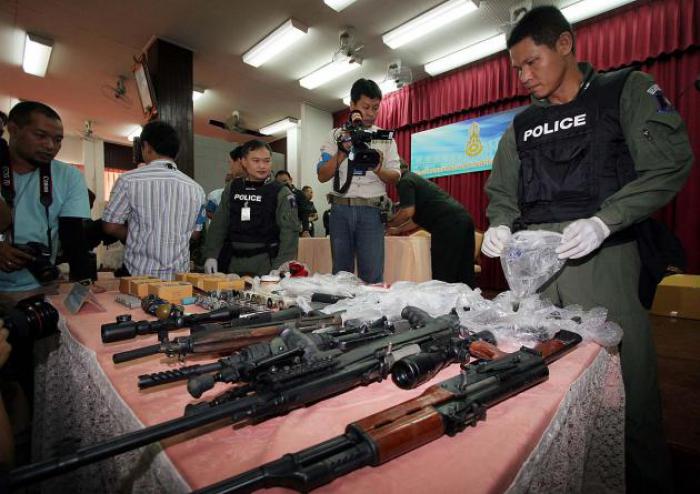 Deputy Army spokesman Colonel Winthai Suvaree yesterday issued details about one raid in Bangkok’s Thawee Wattana district that turned up an AK-47 assault rifle and a loaded magazine, and another in Pathum Thani’s Lam Luk Ka district in which a bullet-proof vest and an Army helmet were seized. The officer did not explain when exactly these two raids were conducted.

However, he repeated the Army chief’s order against public gatherings, the movement of crowds nationwide and other acts stipulated by the military-installed National Peace and Order Maintaining Council (POMC).

Separately, the Lop Buri court issued an arrest warrant for Chatcharn Bupphawal, the husband of Janthana Warakorn-sakulkij, whose apartment in Samut Sakhon was raided on Wednesday and found to contain a large cache of war weapons.

The search at her apartment resulted from a tip-off by a former paramilitary ranger based in Lop Buri, whose home was also found full of war weapons in an earlier raid. The ranger was arrested later.

Meanwhile, after further questioning by the Crime Suppression Division (CSD), Janthana claimed that she had bought several war weapons and explosives from a Karen dealer, who was now allegedly dead.

Pol Colonel Akkharadej Phimolsri, a senior CSD officer, said the weapons in her possession would be examined to see if any of them had been used in several previous attacks and it will be completed in a month’s time.

The officer also quoted Janthana as saying that she had acquired the weapons for her personal use, especially since people on the other side of the political divide had armed guards.

A person believed to be her roommate has allegedly fled and will face an arrest warrant if this person is found to have helped Janthana acquire the weapons.

A police source said Janthana had admitted to being a red-shirt supporter and regularly taking part in red-shirt rallies.

She has also allegedly said that she began collecting weapons after locals clashed with a red-shirt gathering at Bangkok’s Rajamangala Stadium in December.