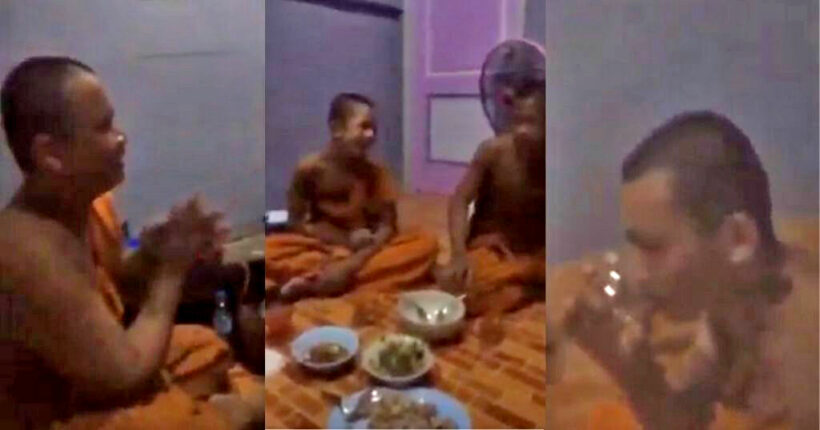 Thai social media has featured a video showing 8 monks and novices were celebrating and drinking alcohol inside their temple accommodation. Another video and a screenshot of the conversation also indicated that the monk had an intimate relationship with the novice.

The party was identified to be happening at the Nikom Kitiyaram temple in the northeast province of Ubon Ratchatani. The abbot of the temple responded to questions saying that it was old footage, and 2 monks from the group in the video had already been forced to leave the monkhood. But others who joined the party were still at the temple and would be questioned over the incident and appropriate discipline apportioned.

The first video featured 8 monks and novices gathered in their rooms with alcohol and food. They were also singing “happy birthday” instead of doing their Buddhist chants. The other video showed clearly that 2 of the monks were in an intimate relationship and were hugging each other.

There was also a conversation posted on social media between 2 of the monks saying that he had broken up with a novice and wanted to host a party.

The abbot, Prachot Kittikhun, informed Thai media that the story occurred 2 months ago over the new year period. The monk and novice who were discovered having a sexual relationships, had traveled from a different province and asked to stay at the temple.

The abbot shared that he had never noticed they were a couple until the residents showed him the videos, but both of them refused any counselling over the matter.

The pair were forced to leave monkhood since the footage was discovered and circulated. According to the report, the other 6 monks featured in the party and drinking alcohol were still in the temple and would be questioned and punished.

Dedinbed
50 minutes ago, Thaiger said: . Another video and a screenshot of the conversation also indicated that the monk had an intimate relationship with the novice will this be under the religious category on Smuthub .. 52 minutes ago,…

Cabra
Monks behaving badly is not news anymore. Sad to say.
HolyCowCm
I think this is last weeks news. If the same then part of the video shown on the news was a monk kid hugging another monk kid from the back while sitting.
kalyan
pathetic practices of enrolling and governing the monks. I am sure people will loose their belief on this stupid monks. i had a great hope on the religion buddhism and its followers, now i started learning the leaders " Monks"…