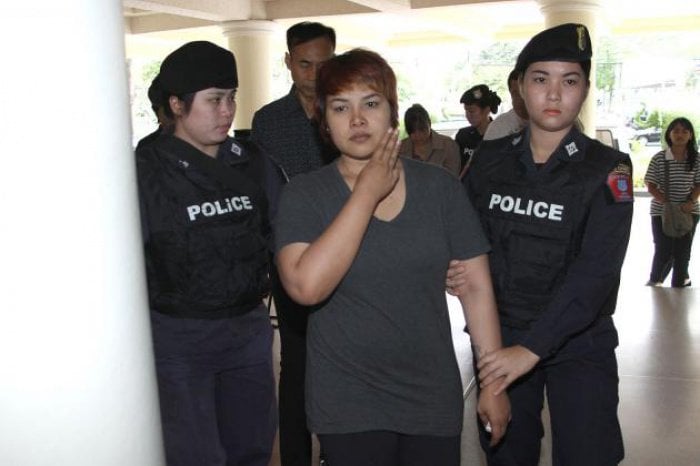 PHUKET: Police yesterday took custody of a key suspect – accused of involvement in the grenade attack on the Criminal Court – from the military.

The woman was then charged with terrorism and criminal conspiracy for her alleged roles in the March 7 attack and also allegedly planning attacks on four other locations in Bangkok.

Natthathida Meewangpla, or Waen, was reported to have been taken away by military officials on March 11, according to a human rights group.

On Monday the National Council for Peace and Order and Army spokesman Coll Winthai Suvari denied that the military had apprehended or detained Ms Natthathida. However, yesterday he was forced to backtrack on that.

First Army Area commander Lt Gen Kampanart Ruddit said the apprehension and questioning of high-profile suspects was conducted secretly in accordance with martial law. But he said all suspects would be processed openly once police take over their cases, with evidence from the military.

Gen Kampanart said all actions of the military had not been reported to him, as commander of the military’s security force. That was why Col Winthai made the denial about Ms Natthathida on Monday, he explained.

Senior police investigator Chaiyaphol Chatchaidej accused Ms Natthathida of seeking people to carry out five attacks through a suspect – Suraphol Iamsuwan – as well as deciding on the locations for each attack, at a price of 10,000 baht for each.

The grenade attack at the Criminal Court on March 7 was the second, but number four among five targets chosen under the plan.

A second pair of attackers was recruited and contacted by another suspect, Wirasak Towongjorn, an alias for ‘Yai Pattaya’, who is on the run, Maj Gen Chaiyaphol said.

FTLA officer Winyat said yesterday that Ms Natthathida was a key witness in the fatal shooting of six people in Wat Pathum Wanaram temple after the military dispersed the red shirts’ protest in Bangkok on May 19, 2010.

Her disappearance, albeit brief, was an obstruction to the ongoing trial over the temple shootings.

He called on the NCPO to do things in a straightforward manner, saying that apprehending Waen or any citizens without notification to relatives was violated people’s rights.

Separately, the Criminal Court yesterday handed a five-month prison term for contempt of court to motorcycle rider Mahahin Khunthong and grenade-thrower Yutthana Yenphinyo. who were arrested by soldiers shortly after carrying out the Criminal Court attack.

The two men were among 16 suspects accused of related crimes. This includes three still on the run.

Boonsong, 20 others indicted over rice deals