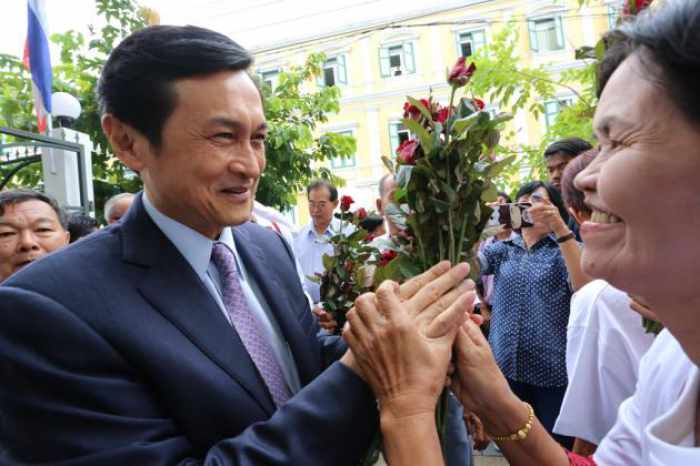 PHUKET: Former education minister Chaturon Chaisang and academic Worachet Pakeerat yesterday became the first civilians to be tried in a military court under martial law since the coup after the court’s prosecutors resolved to indict them for defying separate orders by the junta.

“I’m disappointed and feel there’s injustice against me in many ways,” Chaturon, a prominent politician from the former ruling Pheu Thai Party, said at the decision.

He said that he did not consider it necessary to respond to the summons from the National Council for Peace and Order (NCPO) after the power seizure on May 22.

Chaturon was arrested by armed soldiers at the Foreign Correspondents Club of Thailand on May 27 after holding a press briefing.

He said he went to the FCCT to explain to the public why he had opted not to turn himself in to the NCPO, and that he had no intention of inciting violence but rather wanted peace to be restored in the country.

Chaturon said he and his lawyer were gathering evidence to fight the charges.

“I will continue to be part of the efforts to make this country democratic. I can still [state] opinions honestly as long as they are not against the law or the conditions set by the court,” he told reporters after meeting with the martial court’s prosecutors.

The offences carry a maximum combined penalty of 14 years in prison and a fine of Bt140,000.

Chaturon had criticised the junta on Facebook before he was nabbed.

The court released him on Bt400,000 bail on condition that he not leave the country without court permission, not participate in political gatherings and not issue opinions with the aim of inciting unrest, his lawyer Narinpong Jinapak said.

The court will schedule Chaturon’s arraignment within 30 days, Narinpong said.

The Thammasat University law lecturer, who is a key member of the Nitirat group of academics, was charged with defying two separate NCPO summonses to report to the junta. He could face up to four years’ imprisonment if found guilty.

The court set the same conditions for Worachet’s release as in Chaturon’s case.

Winyat said the defence team would “put on the best fight” and that he would confer with his client about the case.

Killer gynaecologist released for good behaviour after a decade in jail