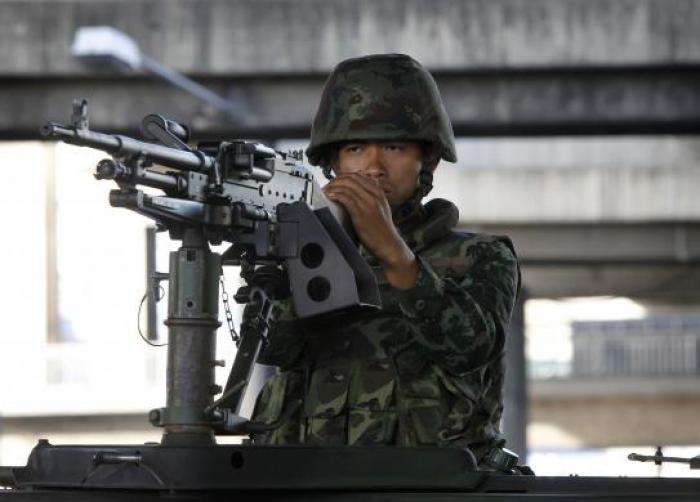 ‘This is not a coup’ says Thai army, as martial law declared
Reuters / Phuket Gazette

PHUKET: Thailand’s army declared martial law nationwide this morning to restore order after six months of street protests that have left the country without a proper functioning government, but denied that it was staging a military coup.

While troops patrolled the streets of Bangkok, the caretaker government led by supporters of fugitive former premier Thaksin Shinawatra was still in office, military and government officials said. Ministers were not informed of the army’s plans before the surprise announcement on television at 3am.

Army chief General Prayuth Chan-ocha said the military was taking charge of public security because of violent protests that had claimed lives and caused damage. Nearly 30 people have been killed since the protests began in November last year.

“We are concerned this violence could harm the country’s security in general. So, in order to restore law and order to the country, we have declared martial law,” Prayuth said.

“I’m asking all those activist groups to stop all activities and cooperate with us in seeking a way out of this crisis.”

Prayuth had invited government leaders to a meeting at 2pm, an army spokesman said.

The pro- and anti-government protesters are camped out at different places in Bangkok and the army ordered them to remain where they were and not march anywhere, to prevent clashes.

The army also called on media not to broadcast material that would affect national security.

The caretaker government, wary of the army given its past interventions on the side of the establishment, welcomed the move to restore order. It said it had not been informed about martial law in advance but it was still running the country.

“The government doesn’t have a problem with this and can govern the country as normal,” caretaker Justice Minister Chaikasem Nitisiri, told Reuters.

Thailand has been stuck in political limbo since Prime Minister Yingluck Shinawatra, Thaksin’s younger sister, and nine of her ministers were dismissed on May 7 after a court found them guilty of abuse of power. An acting prime minister has since taken over.

The crisis, the latest instalment of a near-decade-long power struggle between former telecoms tycoon Thaksin and the royalist establishment, has brought the country to the brink of recession.

The military, which put down a pro-Thaksin protest movement in 2010, has staged numerous coups since Thailand became a constitutional monarchy in 1932. The last one was in 2006 to oust Thaksin, a billionaire who has lived in self-exile since 2008 but commands huge support among the poor.

The United States, which cut aid to its military ally after the 2006 coup, said it was monitoring the situation in Thailand closely.

“We expect the army to honour its commitment to make this a temporary action to prevent violence, and to not undermine democratic institutions,” said U.S. State Department spokeswoman Jen Psaki in a statement.

Army chief Prayuth had warned last week, after three people were killed in a gun and grenade attack on anti-government protesters in Bangkok, that troops might have to be used to restore order if the violence continued.

“The army chief was moving towards imposition of martial law ever since his announcement last week that the army would use full force if things get out of hand,” said a senior army official, who spoke on condition of anonymity.

“He now feels that the police cannot handle security and is alarmed by grenade attacks and other incidents and the fact neither side looks like it will back down.”

The army tried to mediate in the crisis late last year, bringing together then premier Yingluck and anti-government protest leader Suthep Thaugsuban. It has played down fears of a coup, stressing that politicians must resolve the dispute.

“We need cooperation from them to announce to the people ‘do not panic, this is not a coup’,” an army general said.

Ten satellite television channels, including stations run by pro- and anti-government groups, were ordered to stop broadcasting to “preserve peace and order”.

The baht fell against the dollar in early trade but steadied later and dealers suspected that was due to intervention by the central bank. At 0346 GMT the baht was quoted at 32.48/50 per dollar after earlier trading at a low of around 32.64.

The stock market fell around 1 per cent.

Acting Prime Minister Niwatthamrong Boonsongphaisan on Monday ruled out resigning as a way out of the crisis that is stunting economic growth, as the anti-government protesters stepped up their pressure to remove him and install a new administration.

Six months of turmoil, including a disrupted general election and violence on the streets, is dragging down Southeast Asia’s second-biggest economy, which shrank 2.1 percent in the first quarter of the year.

Andrew Colquhoun, Head of Asia-Pacific Sovereigns at ratings agency Fitch, said the imposition of martial law was not necessarily negative for Thailand’s government debt, and might even help break the political deadlock.

“The key factors for the ratings are whether Thailand can avert more serious and bloody political disorder, and whether we see a return to a fully functioning government that is able to make policy and pass a budget for the next fiscal year starting in October,” he said.

While the anti-government protesters want a “neutral” prime minister appointed to oversee electoral reforms aimed at ending Thaksin’s influence, the government views an early general election as the best way out – the ruling Puea Thai Party would be well placed to win. But a vote tentatively scheduled for July 20 already looked unlikely to take place.

Opposition supporters disrupted a Feb. 2 election which was later declared void by the Constitutional Court. The protesters say they reject any vote before electoral reforms.

Jatuporn Prompan, leader of pro-government “red shirt” activists, said he and his followers would keep up their protest in Bangkok’s western outskirts until the restoration of “democratic principles” leading to an election.

“That’s fine,” Jatuporn told Reuters when asked about his reaction to martial law. “We will stay here and continue our protest until the country is back to democratic principles, which will lead to an election and getting a new elected prime minister.”

The anti-government protesters said they still wanted the caretaker government out.

“We will not march today but we will stay and continue the protest until we achieve our goal,” anti-government protest leader Sathit Wongnongtoey told Reuters.

Weak exports and the political mayhem have damaged the economy, prompting the state planning agency to cut its forecast for 2014 growth to between 1.5 and 2.5 percent, from a range of 3.0 to 4.0 percent.