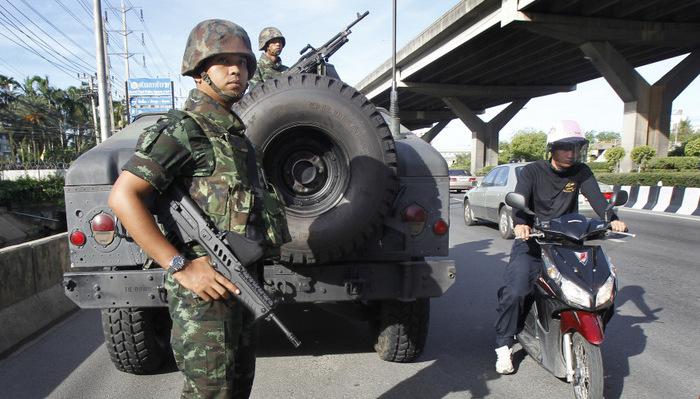 PHUKET: The declaration of nationwide martial law as of 3am today has left Phuket officials unperturbed.

After more than six months of violent street protests in Bangkok that resulted in 24 deaths, the order comes to prevent further violence and to return peace and order to the country, said Gen Prayuth.

“In Phuket, protesters are not violent, so the martial law order is nothing to panic about,” Vice Governor Sommai said.

“The law giving the Army the right to declare martial law was established in 1914. The purpose is to maintain peace. People are still permitted to gather at public places, as long as no violence occurs.

“I would like to urge tourists not to worry about martial law. Please enjoy your holidays here in Phuket.”

However, V/Gov Sommai did express some concerns about how the order could affect the tourism industry in Phuket.

“We are a bit concerned that tourists might change their plans to visit Thailand when they see the news,” she said. “However, I don’t think it will have a significant effect in Phuket, because we do have many direct flights to our island from other nations.”

An officer at the Third Naval Area Command, based in Phuket, confirmed that there was no Thai Army base in the province, and that the command center had not received any special orders concerning Phuket.

“Everyone is just working as usual,” said the officer, who declined to be named.

“We have been ordered* to keep an eye on possible violence from protesters, both pro-government and anti-government. But Phuket does not have that kind of violence.”

“If we receive any orders that affect Phuket, we will make an official announcement.”

Earlier today Gen Prayuth declared that the peacekeeping command would replace the Centre for the Administration of Peace and Order set up under then-Careataker Prime Minister Yingluck Shinawatra.

“Don’t worry about the martial law,” the officer said. “Just live your life normally. We are your peacekeepers.”

* The original story said that the order was issued “a long time ago”.

Not enough time to prepare for Asian Games, says Thailand