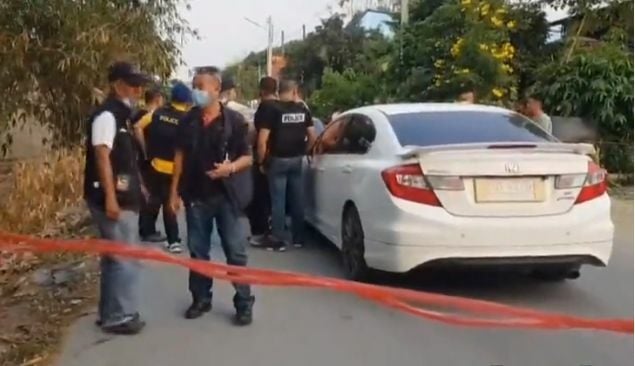 A 32 year old man was shot and severely wounded after crashing into police carsand firing shots at officers at a roadblock in Chon Buri. Anuphap ‘Namlai’ Maksap was sent to a local hospital with a police escort. Officers say they received a tip about someone carrying drugs.

40 year old Wanchalerm Boontam, who was driving the car, claims Namlai just called him to “hang out,” but when they drove toward a police checkpoint, Namali pointed a gun at him, demanding that he drive through and crash into the police cars.

“Namlai called me to pick him up, claiming he wanted to just hang out. We were blocked by police on the road at a checkpoint. Namlai ordered me to crash my vehicle into several police cars and run the checkpoint with his gun pointed at my head.”

Apparently, Namlai jumped into the driver seat, on top of Wanchalerm, and took control of the steering wheel, Wanchalerm says. Namlai jumped out of the car and started firing shots at police, he says.

Namlai was shot in the ribs and rushed to a local hospital. A doctor at the hospital later reported to police that 30 methamphetamine pills and a small amount of crystal methamphetamine was found in Namlai’s pants.

Chon Buri police chief Nitat Weanpradap told Pattaya News the police had set up a roadblock after receiving a tip that someone in the area was carrying drugs.

“Police asked the suspect’s car to stop but they refused and fought back, firing several shots at officers and attempting to run the roadblock and crash into police vehicles. Police were forced to open fire to take down the suspect.”

Wanchalerm was arrested and Namlai faces multiple criminal charges including attempted murder of a police officer.