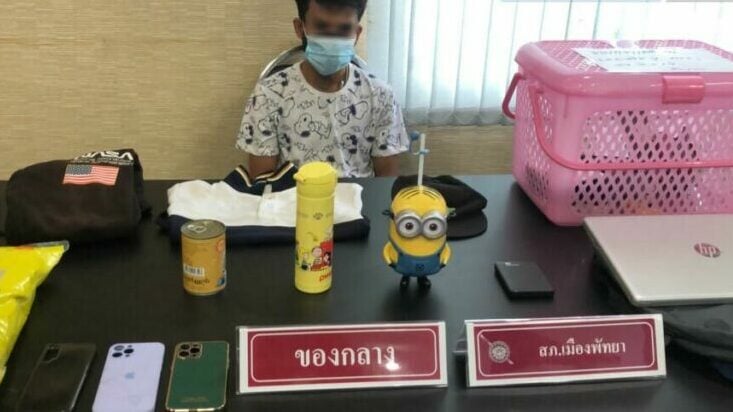 A man and young girl have been arrested in Bang Lamung, a district in Chon Buri for allegedly twice stealing items from a culture offical’s office.

Reportedly, the unemployed 28 year old Lek Aksorn stole items from the Culture Ministry’s office valued at hundreds of thousands baht for his 14 year old girlfriend’s birthday party. According to Thai media, the man confessed he stole the items for the birthday party but planned to donate some of the ill-gotten gains to the homeless population in Pattaya.

Police also arrested the girlfriend who is half the man’s age. She was not identified by name because is a minor. They were arrested at house in Nongprue. Reportedly, 12 stolen items were recovered at the house. The house they were arrested at was 500 metres from the scene of the crime.

On Sunday, Pattaya police were alerted to the fact that 2 suspects had broken into the Coordinating Center office of the Cultural Ministry. Then, on the following day, police were alerted at 1 am that a 2nd break in had occurred at the same office. Police used CCTV footage to find the suspects. They reportedly recognized both suspects from the previous day’s break in.

Lek is facing multiple charges of theft. However, it is unknown if his lolita-ish girlfriend will also be charged, or if Lek will face charges for “dating” a girl who wasn’t born when he was her current age.

It is also not known if they will get out in time to celebrate her turning 15.

Police arrest woman for possession of 20,000 meth pills she claims she found next to electrical pole