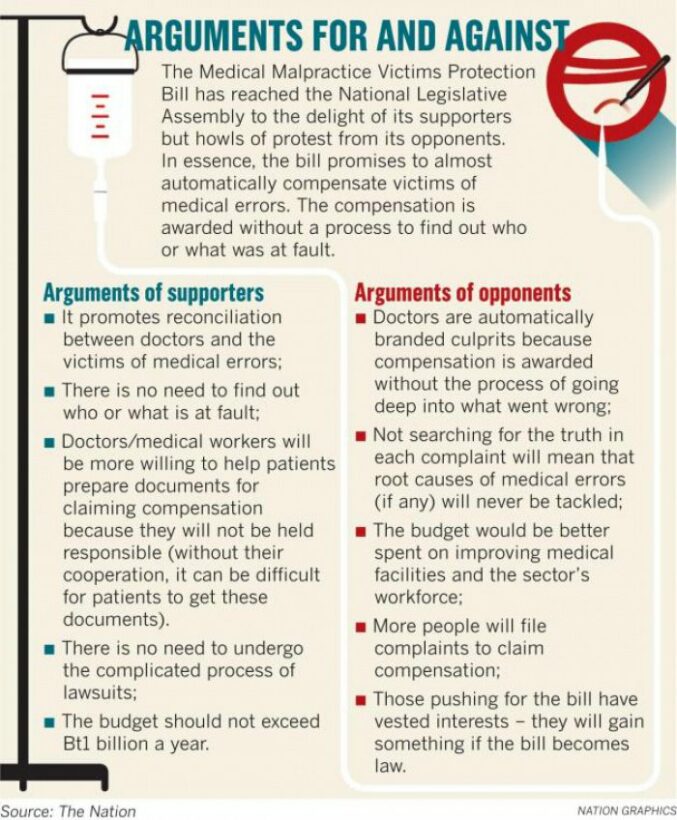 PHUKET: Supporters of the Protection of Victims of Medical Mistreatment Bill see no reason that would lead to some doctors wanting it scrapped.

“Every article in the bill will benefit doctors and improve patient-doctor relations,” Dr Pairoj Boonsirikamchai of the National Institute for Emergency Medicine said.

The bill promises to pay compensation to patients who suffer damage from medical services without a process of having to proving who or what is at fault.

“Through such an approach, patients and doctors won’t have to go through the complicated legal process of determining who should be held responsible. Conflicts between doctors and patients thus should be minimized,” said Dr Pairoj, who is also a former assistant to the Medical Council of Thailand’s secretary-general.

He said there was nothing bad about the bill, which probably offered the best solution in event of maltreatment.

“Money may not be the ultimate answer but patients’ comprehensive access to an appropriate amount of compensation should be the best way out,” he said.

He believed that the combined amounts of compensation would not exceed Bt1 billion a year if the bill came into law. “The government won’t go broke because of this size of budget,” Dr Pairoj said.

The bill would compensate patients who suffer preventable medical errors – not from natural illnesses.

“Even though we will not look into who should be held responsible or what exactly was the root cause of errors, we will not pay compensation for no reason,” he said.

A fund that would be activated by the bill would acquire money from three existing funds that would mobilize money from hospitals willing to contribute on a voluntary basis.

He said the minimum amount would reach 1.4 billion baht, plus a possible annual subsidy if the amount were not enough.

At present, medical-malpractice victims usually receive help under Article 41 of the National Health Security Office Act, which grants no more than 400,000 baht in compensation. The amount could be either disproportional to the damage or unsatisfactory to patients and relatives.

Article 41 was, thus, inadequate in delivering remedial help to medical-malpractice victims and in preventing legal disputes between the victims and doctors. As doctors now face the risk of lawsuits over maltreatment or alleged maltreatment, some have taken out insurance to protect themselves in the event of a patient lodging a complaint.

Dr Pairoj said that the Protection of Victims of Medical Mistreatment Bill would make a difference. While the bill did not put a ceiling on the amount of compensation, he said it was very likely that patients would be happy with the pay-out.

In addition, on receiving the compensation patients would be required to sign an agreement to give up any right to file a compensation lawsuit on the same grounds later.

Dr Pairoj defended the clause under the bill that would result in a board that governs the payment of compensation consisting of mostly non-doctors. “If you fill the board with mostly doctors, there will be a sense of distrust. People are prone to believe that doctors will help members of the same profession,” he said. “In addition, the process involved is not about whether recklessness is involved. It’s about whether damage occurred.”

Dr Pairoj concluded that the bill would benefit both doctors and patients. “I would like opponents to the bill to review their stance. Please focus on the best interests of people in general,” he said.