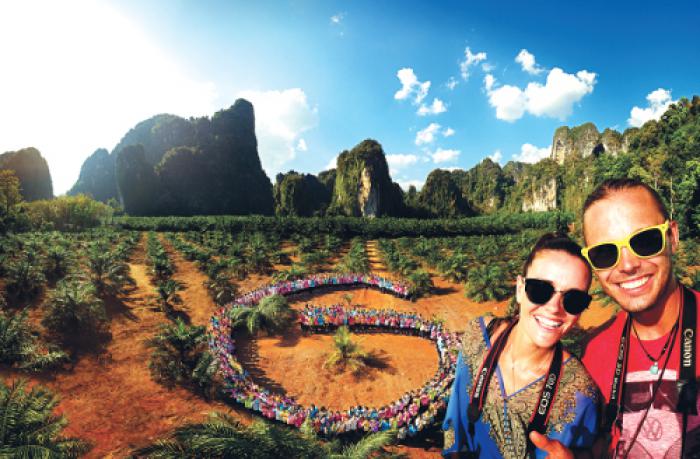 PHUKET: ABC Charity, a global art project of kids helping kids, has continued its journey around the world. They are creating the world’s first ever “human alphabet” – each letter made up of 500 children, in 26 different countries – ABC charity does not only help create fantastic memories for children, it will also raise money for a good cause.

The letter “G” took place in Krabi Thursday, February 13 with 500 children from Klong Ji Lad School taking part. The children had an amazing time and the day was filled with smiles and laughter. The event included music and food, as well as an inspirational speech by ABC Charity founders Ashley Cooper and Filip Cederholm, who reinforced their motto, “Together we can make a difference.”

ABC Charity is currently working its way around the globe creating one letter per country from A to Z. When the alphabet is complete, the letters will be sold as limited edition photo art. The idea is that companies and individuals will buy their name and 100 per cent of the profit will go back to local charities in the participating countries. Behind the project is Canadian Ashley Cooper and Swede Filip Cederholm, who gave up their previous lives to fulfill their dream; doing what they love, while inspiring kids and raising money for charity.

Ashley Cooper and Filip Cederholm were excited about being in Thailand, as Ashley puts it, “I had visited Thailand eight-years ago and knew it was somewhere we had to include in our journey. Not only is it a spectacular location for the letter “G”, the people of Thailand and Krabi in particular have been so kind and welcoming.

“We have had great support from the Mayor of Krabi Mr Keratisuk and his staff, as well as the Krabi Tourism Authority and Klong Ji Lad School. Mr Saratt Kyokong, the owner of the land, has not only given us permission to use the property, he even helped us arrange a crane to take the picture. We have also received great support from the Swedish Embassy in Bangkok. It is because of people like this that we have been able to continue our journey around the world.”

“Once the alphabet is complete we will tour around the world with the exhibition and look forward to coming back to display the letters, both in Krabi and around Thailand” added Ashley

You can join the thousands of people following the journey at: abccharity.org and view the series at: peaceloveandphotography.tv