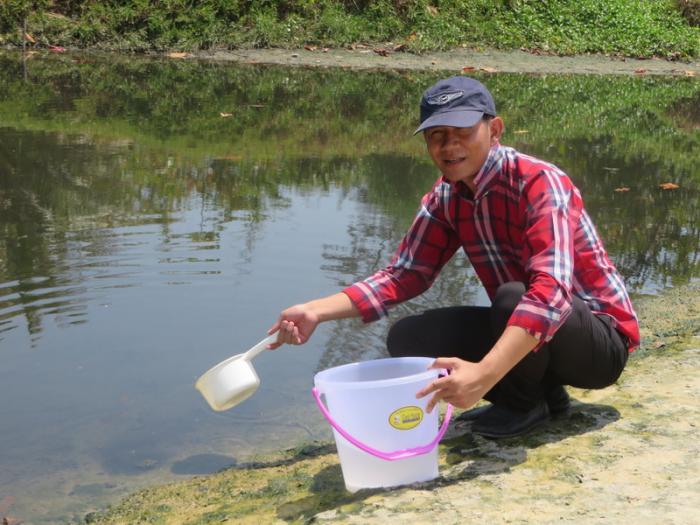 PHUKET: Governor Maitri Inthusut washed his hands on Tuesday in Karon Beach canal water, which had run black and rancid on Monday.

“The water itself is clear,” Governor Maitri said. “The black color is just sediment that had gotten stirred up. I want everyone to know that the water is clean and won’t harm you.”

Just a day earlier, locals, tourists and officials were stunned by the condition of the water flowing from Nong Han Canal across Karon Beach and into the ocean.

“I went to see it myself after receiving a report from local people. It was absolutely shocking, the sea was black and there was a horrible smell,” Village Chief (Kamnan) Winai Chidchiew said on Monday.

Kamnan Winai admitted that he had seen black water trickling from the canal into the ocean before, but had never seen it pouring out in such volume.

Karon Beach made headlines around the world three years ago when a German TV crew from a major channel found severely polluted water with high counts of coliform bacteria from human feces.

On Tuesday, Regional Environmental Office 15 Phuket conducted pH tests and took water samples back to their lab for further testing.

The rancid water had flowed to the sea, Kamnan Winai said, because a nearby hotel under construction had released dirty water into the canal.

The water stirred up sediment, overflowed sections of the canal and carried the organic matter downstream.

Governor Maitri ordered Karon Municipality to remove the unsightly dark green and black stains on the sand by dredging the canal.

“The dredging is a short term solution,” the governor said.

It was not clarified how the surplus wastewater was managed.

Karon Municipality will apply for a 350-million-baht budget to boost their water treatment capacity in the fiscal year 2015, Gov Maitri said.

In the meantime, the project to dredge up the top six inches of sand in the canal may take time to get started, said Pornsri Suthanaruk, director of Regional Environmental Office 15 Phuket.

“Karon Municipality will have to ask for a budget and then solicit bids. However, I advised them to try to get money from the Department of Disaster Prevention and Mitigation and use prison-labor,”Ms Pornsri said.

“It’s up to them, but I’d like this cleaned up as fast as possible.”