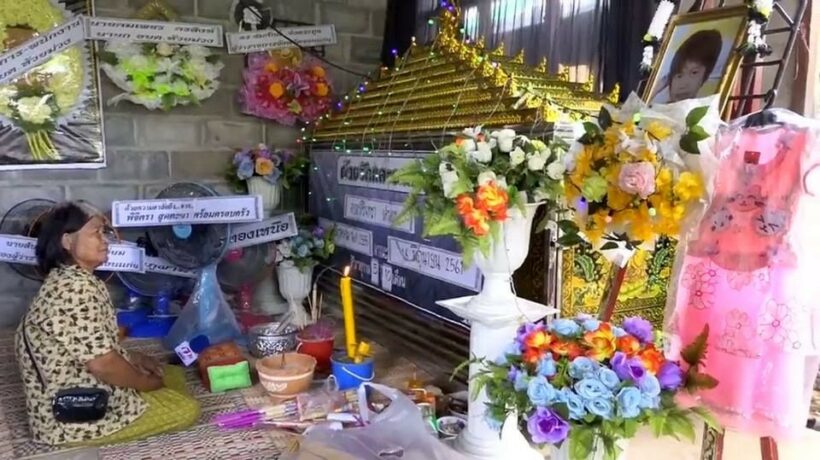 Khon Kaen Governor Somsak Jangtrakul is assisting with aid and grief counselling to the family of five year old Kabinta “Nong Yam” Kehphuang, who died last Monday after being inadvertently left inside a locked pickup truck in sweltering heat outside a school for eight hours.

The girl’s death – the eighth such fatality since 2012 – prompted her teacher, 32 year old Phichitra Sudtana, to seek treatment for shock at Khon Kaen Rajanagarindra Psychiatric Hospital. She’s charged with recklessness resulting in another person’s death and released on bail. Her failure to realise that Kabinta had been left in the pickup truck is being blamed in part on school understaffing. Governor Somsak ordered administrative organisations in 26 districts to ensure there were more than 1,000 teachers or staff members at their 396 kindergartens, and that they were checking more frequently on the 19,000 pupils registered.

Somsak said school directors would soon be assembled to discuss further measures, possibly including the introduction of bar-coded student ID cards that would track their arrival at and departure from school and notice any missing pupils.

Somsak said the Tambon Huai Moung Administrative Organisation, which supervises the school in Phupha Man district that Kabinta attended, had offered to sponsor the four days of funeral rites and the cremation. Representatives of the Khon Kaen Social Development and Human Security Office visited the family and gave them 2,000 initial assistance. More financial aid is also forthcoming, including 20,000 baht from the Department of Older Persons, since Kabinta lived with her 70 year old grandmother, Phetch Noikaew.

The district office has also appealed for public donations for the family.

Death penalty for child rape cases in Myanmar voted down

Measures to control the use of herbicides being developed