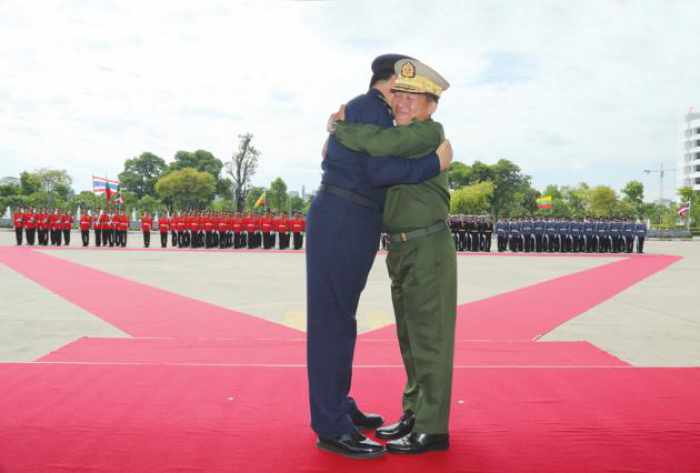 During a meeting in Bangkok with Supreme Commander General Tanasak Patimapragorn, a deputy leader of the ruling National Council for Peace and Order (NCPO), Min Aung Hlaing said the Tatmadaw – Myanmar’s armed forces – had had a similar experience to Thailand, only worse, in 1988.

He was referring to the uprising against the military dictatorship of General Ne Win, which ended in a bloody military crackdown and a coup to take control of the country.

Myanmar’s junta – known initially as the State Law and Order Restoration Council and then the State Peace and Development Council – ruled the country until 2010 when a poll brought a quasi-military administration to power.

The Tatmadaw is now at crossroads as it decides whether to withdraw from politics and allow an elected civilian government run the country.

Myanmar is considering calls to change its constitution and whether to reduce the military’s power to veto legislative rulings in the new parliament in Nay Pyi Taw.

Thailand’s three-stage roadmap, which includes reforms and drafting a new charter – and Min Aung Hlaing said the NCPO could succeed in running the country.

He also thanked his counterpart for technical assistance and advice on the sufficiency economy philosophy for farmers, saying it would benefit Myanmar’s development.

Prayuth explained the situation to him and the junta’s foreign policy toward neighbouring nations. Thailand and Myanmar have good ties, resulting in a peaceful border, Werachon said.

Tanasak, meanwhile, said the Thai and Myanmar armed forces had unity and good cooperation. He said Thailand was ready to provide more cooperation in many areas, such as border affairs and military education. The two armies would cooperate for the sake of security, economic development and preparedness for full implementation of the Asean Economic Community next year.

Min Aung Hlaing, who asked Prem to adopt him when they first met in 2012, meets with Prem whenever he is in Thailand. Prem yesterday gave him gifts that included a portrait of HM the King with Privy Council members.

The Thai political spotlight shone on Min Aung Hlaing last year when he was mentioned in a controversial leaked phone conversation by two unknown men that he had a close connection to former PM Thaksin Shinawatra. The pair discussed how Thaksin believed that Min Aung Hlaing was a powerful figure in Myanmar and could pave the way for Thai investment in the country, notably the Dawei economic zone.

A source said Min Aung Hlaing’s latest visit was not only to cement ties with the Thai military, but to disassociate himself with powerbrokers in the ousted government.