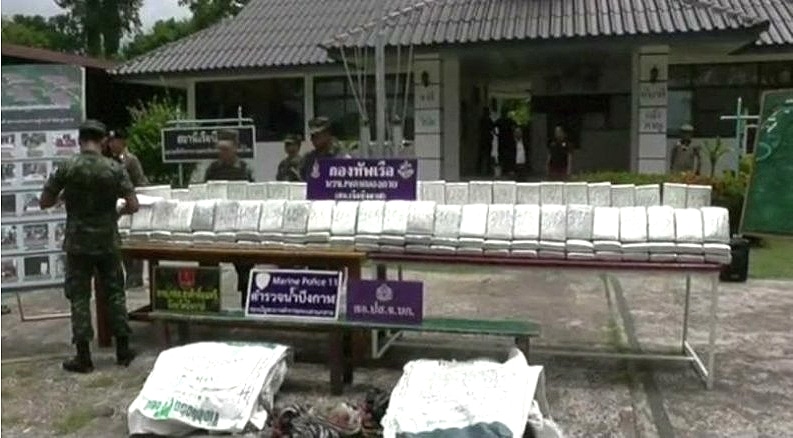 A total of 490 kilograms of dried marijuana worth 15 million baht in street value has been seized by Thai authorities in Bung Kan province in the far north-east of Thailand on the Mekong River, Saturday, but the suspected Laotian smugglers managed to flee.

Bung Kan Customs checkpoint head Prasongsak Boonma said the four Laotian smugglers, who were bringing sacks of marijuana onto the Mekong riverbank on the Thai side early Saturday morning, quickly dropped the illicit drugs on seeing officers approaching and ran towards their boat, whose engine was still running, and headed back over to Laos.

Acting on a tip-off that a huge drug haul was to be smuggled across the Mekong River from Laos to Thailand via Ban Nong Dern Tha in Tambon Nong Dern, officers from the Royal Thai Navy’s Mekong River Patrol Unit, Bung Kan police, and Bung Kan border patrol police division 244 jointly conduct a stakeout in an attempt to make arrests and impound the drugs.

The marijuana batch was sent as evidence to the Bung Khla Police Station for further legal action.