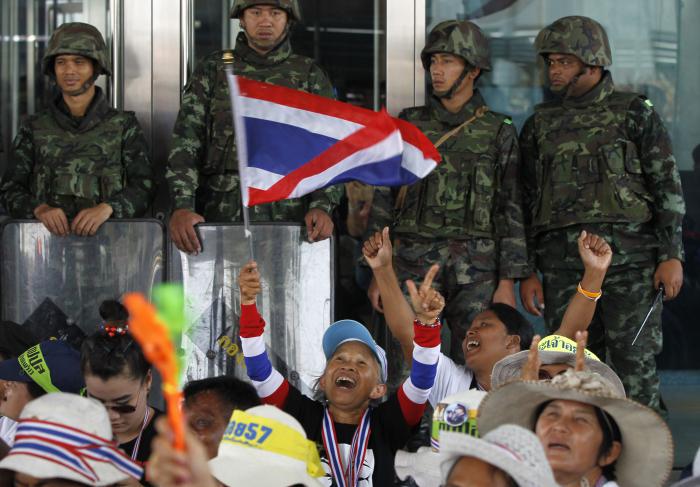 PHUKET: Thailand’s government is to ask the army to deploy more troops in the capital, Bangkok, as fears mount that the country’s lengthy political crisis could move into a more violent phase.

Surapong Tovichakchaikul, a deputy prime minister, voiced concern on Friday about the potential for clashes between pro- and anti-government groups if Prime Minister Yingluck Shinawatra is ousted in May as a result of legal cases brought against her.

Yingluck, who has faced six months of street protests aimed at forcing her out, has been charged with abuse of power for her transfer of National Security Council chief Thawil Pliensri in 2011, which opponents say was done for personal and party political reasons. If found guilty, she may have to step down.

“There are important legal cases coming up next month and the red shirts will rally,” said Surapong, who heads the Centre for the Administration of Peace and Order that coordinates the state’s handling of the protests.

The “red shirts” are supporters of the Shinawatras and Yingluck’s government and they have vowed to resist any bid to force Yingluck from office, by either the anti-government protesters or the courts.

“We are worried there will be violence and clashes between the protesters and the red shirts, which is why we must increase the presence of troops to protect security,” he told reporters.

A February 2 election that Yingluck looked set to win was disrupted by the protesters, who stopped candidates from registering and blocked polling stations.

As a result, a court nullified the election in March and the Election Commission has yet to set a new date.

Yingluck’s brother, ousted premier Thaksin Shinawatra, or his loyalists have won every election since 2001. He lives abroad to avoid a jail term for graft he says was politically motivated but is widely seen as the guiding hand behind his sister’s government.

Weeks of political upheaval have hit tourism and business confidence and left Thailand without a properly functioning government.

Opposition leader and former Prime Minister Abhisit Vejjajiva also warned of an escalation in violence next month and offered to help kick-start dialogue between the different parties and groups involved in the protest.

“I think there are many people who want to see common ground emerging. My intention this week is to say that: isn’t it time we all accept the reality that neither side can get its way, and even if it did, it couldn’t bring long-lasting stability,” he said in an interview.

In a message posted on YouTube, he added that upcoming court verdicts would not solve the problem either, nor would any intervention by Thailand’s coup-prone army.

“The courts cannot tell us how the country will move forward in a manner that all sides will accept,” Abhisit said. “And I don’t believe that a coup, by whoever, or military intervention, will bring peace back to the country.”

Amongst the charges Yingluck faces is one of dereliction of duty for overseeing a financially ruinous state rice-buying scheme that has left hundreds of thousands of farmers unpaid.

Anti-government protest leader Suthep Thaugsuban has yet to respond to Abhisit’s invitation to talk but Yingluck welcomed the idea.

“At least Abhisit agrees with elections and the need to speak to each other. This is a good beginning,” Yingluck told reporters.

“If the opposition creates a path to find a way out then this is our chance to walk together.”

Suthep was a deputy prime minister in the government led by Abhisit until 2011. He resigned from their Democrat Party to lead the street movement and the Democrats boycotted the election in February, backing Suthep’s call for electoral reform.

Surapong said Abhisit had to convince his former deputy to give up his anti-government campaign on the streets.

“Abhisit must talk to Suthep and ask him to stop his protest and Abhisit must commit to elections,” Surapong said. “If he can do this then the government is ready to talk to him”

“But he must not be two-faced.”